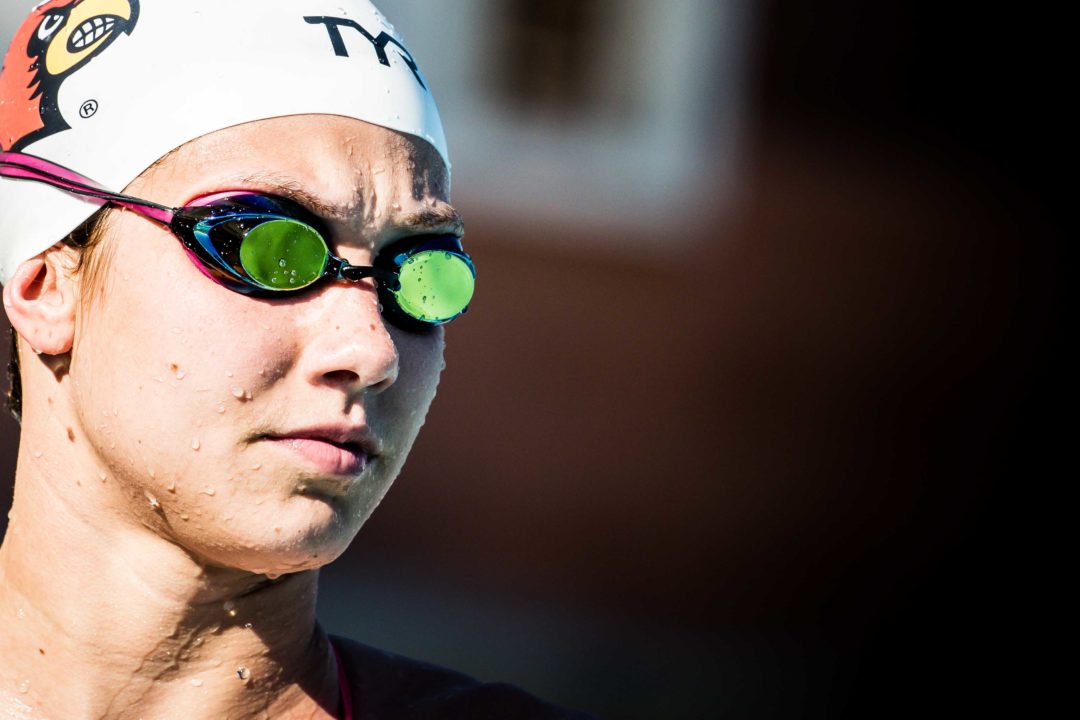 From the women's 200 freestyle to the men's 100 breast, PSS Indy is sure to deliver some fast racing 1 month out from US Olympic Trials. Archive photo via Jack Spitser/Spitser Photography

Check out the race videos from Thursday and Friday night in Indianapolis, including Lilly King’s decisive victory in the women’s 100 breaststroke.

Follow along live as racing gets underway at the fourth and final prelims session of the 2021 Pro Swim Series – Indianapolis.

The 4th and final stop of the 2021 TYR Pro Swim Series is set to take place in Indianapolis from May 12-15. As was the case with the first 3 stops, the action-packed meet will feature many of the countries top swimmers who are just weeks away from making their big for the 2021 US Olympic team. While Olympic hopefuls topping the psych sheets in every event, here are 4 exciting storylines to look out for this week in Indianapolis:

The women’s 200 freestyle is shaping up to be one of the biggest question marks heading into next month’s Olympic Trials. While Katie Ledecky leads both the US and world rankings in the event this season with a 1:54.40, the lack of depth among American women this season has left uncertain who will likely qualify to swim the event in Tokyo should Ledecky win at Trials.

Katie McLaughlin so far holds the 2nd fastest time in the country with a 1:57.48 while Paige Madden has also been under 1:58 with a 1:57.64. Their 2nd and 3rd ranks among Americans, however, are only fast enough for 17th and 20th ranks globally this season.

Paige Madden will be present in Indianapolis, looking to improve upon her 1:57.64 from December 2020, and will be joined by 2012 Olympic gold medalist and American record holder in the event Allison Schmitt. Schmitt’s season-best is currently a 1:58.04 but if she can get that down a bit towards her PB and national record of 1:53.61, she could be looking at a 4th straight Olympic appearance.

Joining Madden and Schmitt, Leah Smith, Gabby DeLoof, and Erika Brown will round out the top 5 with their respective entry times of 1:57.40, 1:57.62, and 1:57.68. The global field has already proven that it could easily take a sub-1:56 swim to even make the Olympic final so we will be excited to see if anyone in the field this week can near that mark with a sub-1:57.

By “new matchup”, we mean new this season as 2 of the country’s leading breaststrokes have yet to race at the same meet this season. Cody Miller‘s sole PSS appearance thus far was at the January meet in San Antonio, while Michael Andrew‘s sole appearance was in Mission Viejo in March. Miller swam a 1:01.20 in San Antonio but boasts a season-best of 59.65 from the US Open in December while Andrew’s fastest 2020-2021 swim so far has been a 1:00.03 which he swam in April.

Matheny will also be present in Indianapolis and the race against Miller and Andrew will be an opportunity for him to improve upon his 1:00.17 PB from 2019 and crack a minute for the first time. Considering that 3 men thus far have been sub-1:00 in-season, it will very likely take a 59 or faster to qualify for the Olympics next month.

While we will of course need to wait until Olympic Trials to get a full picture of the men’s 100 breast field, Indianapolis will serve as one likely final look at where Miller, Andrew, and Matheny stand heading into Omaha.

Mallory Comerford is the second-fastest American woman to ever swim the long course 100 freestyle and the 16th-fastest American to swim the 100 freestyle this season. Her 52.59 from World Championships in 2017 is second only to Simone Manuel‘s 52.04 from 2019. Her season-best thus far, however, is well above her PB and currently sits at a 55.21 from December 2020. 15 fellow American women have been faster than that so far in the 2020-2021 season:

While she may not even need a best time in order to make the US Olympic team in the 100 freestyle, Comerford will certainly need to be faster than a 55.21 next month should she hope to swim the event in Tokyo. Comerford’s season-best is actually right around the time she swam at 2016 Olympic Trials when she hit a 55.14 in the prelims. A year later, however, Comerford was a 52.81 at US Nationals to qualify for the Worlds Team, going on the place 4th in the individual event while helping the US to gold in the 4×100 with her 52.59 opening leg which was then an American record and now sits at #2 all-time in the US.

For reference, Comerford had a season-best of 53.91 heading into the summer of 2017 which she swam at the Indianapolis stop of the 2017 Pro Swim Series. This 2021 Indianapolis meet will likely serve as Comerford’s final shot at improving upon her best time heading into Trials.

While Comerford’s season-best trails her personal best, she is seeded 1st in the women’s 100 free with a 52.98, a time that she swam at World Championships back in 2019. While she’s seeded first and is the historically fastest woman in the field, she will be joined by a solid crew of sprinters, a number of whom have been faster than her this season. France’s Beryl Gasteldello is entered in second place with a 53.40 while Erika Brown closely follows with her 53.42 for third. Allison Schmitt is also entered with a sub-54 time of 53.80 while Catie DeLoof is 5th with a 54.28 while Gabby DeLoof is tied for 6th seed with Andi Murez at a 54.41. Kelsi Dahlia will round out the top 8 with a 54.56.

French Olympian Beryl Gastaldello was a headliner on France’s 27-strong European Championships roster announced earlier this year. The US-based sprinter, however, has decided to forgo Euros which are set to be held next week in Budapest, Hungary.

Gastaldello’s absence at European Championships will a slight blow for France considering that she is currently tied for 8th worldwide this season in the 100 freestyle with Freya Anderson and Madi Wilson at a 53.40. Further, she and Anderson are tied for 3rd among those eligible to swim at Euros behind Ranomi Kromowidjojo‘s 53.13 and Marie Wattell‘s 53.32.

Along with the individual 100 freestyle, Gastaldello would have likely swum the 100 butterfly, along with the women’s and mixed 4×100 freestyle relays and 4×100 medley relays. The French still have a solid women’s sprint contingent, however, lead by Charlotte Bonnet, Marie Wattel, and Mélanie Henique.

The Olympic season of 2016 20 years old Gabbi Deloof ended up having 2:00.57 as her best in 200FR
Then just in two years she dropped 4 sec from her best time becoming a 1:56 swimmer. This rocket like progress gave a strong hope that the USA team will have a sub 1:56 swimmer by next Olympic Games. But she bounced back instead returning basically to the place in ranking where she came from. I still have a hope that the swimmer who had ability to swim 1:56 not that far ago can do it again becoming a valuable member of US 4×200 relay.

I’m more intrigued to see how Paige Madden does after going 1:57 in December and dropping time in 200 scy at NCAA. Summer 2019 she was 1:57 at nationals. I think she can drop at least another second and a half, maybe 2 as she is a better LC swimmer.

Gabby daloof has Been under 157 1 Time I believe

2weeks later at us nationals Schmitt was back to her decent form when she swam a 1:56 to take the national title

Allison Schmitt was not much better in the women’s 200 meter freestyle at the 2019 FINA World Aquatics Championships:

Will a US man make the olympic final in the 100 breast?
And will US women step up their game in the 200 free with the prospect of the relay?
Right now both events look weak in US swimming. But let’s see what happens at trials before making crazy predictions.

Where have you been?

US W4x200 relay may look weak in your eyes but not weaker than world champion and world record holder Australian team.
The only thing that I agree with in your post is ” let’s see what happens”. That’s very wise. 😀

It is very possible and is long due. They have to be that fast before starting tapering for trials.

Honestly I don’t know why people care so much about the USA being “weak” in one event or another. They dominate so many events already as it is. I think it’s good for the sport that other countries are getting super strong in certain events. like Hungary in the 200 fly, Japan in the breaststroke, or GB in a couple relays.

It is not in Simone Manuel’s best interest to swim the individual women’s 200 meter freestyle at the Tokyo 2021 Olympics.

The return of the KING!!

WHERE HAVE YOU BEEN. MY HERO

I have a question.. Are they still going to take the top 6 for relays or just top 4, due to corona?

There’s been no indication that they’re going to change their selection procedures.

There should be enough swimmers to double up on individual events:

I agree with Ledecky and Manuel doubling up but Leah smith in the 200? Definitely As a relay swimmer The 200 at the most intrigue event at the trails because as a coach you would thinkYou would want as many 156 swimmers on the team as possible that way the day of the 800 relay you can put over who is on fire at that time

The question should be who fills in the blanks?

Great to hear, that increases my chances to make the Olympic team by 50%.

50 free-1st Manuel takes the win here convincingly she ready to go and take the Olympic crown 24.06 for the trials win
2nd Tori Huske continues to have big performances all week nudges out brown, weitzeil and Curzan for the runner up spot in 24.29

100 free- 1st Manuel makes statement win ready to defend her Olympic crown in a US Open record of 51.93 leads deep American squad heading into Olympics ready to take down the Aussie stranglehold on the 4×100 free relay
2nd- Mallory Comerford shows how to get it done when it matters most 52.61… Read more »

What about Sydney Open this weekend. I think it is much stronger and more important meet.

Katie Ledecky’s smallest margin of victory in the women’s 1500 meter freestyle was the epic race with Lotte Friis at the 2013 FINA World Aquatics Championships in which both women broke the former world record.

Why is Leah Smith considered an upset for second in the women’s 400 meter freestyle?

Some of those times are just plain ridiculous. If anything, athletes tend to save personal best times for the final of the Summer Olympics. Does the name Madeline “Maya” DiRado ring a bell from 2016?

This reads like a wishlist rather than a prediction.