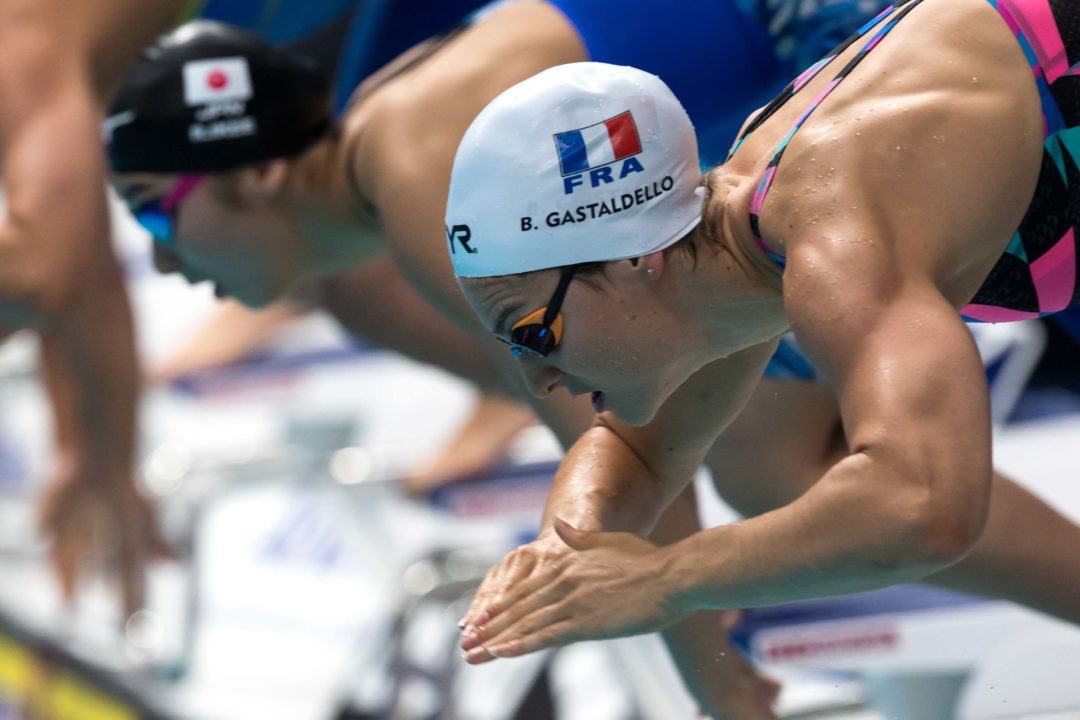 Beryl Gastaldello and Florent Manaudou are among some of the big names that will represent France at the upcoming European Championships in Budapest. Current photo via Mike Lewis/Ola Vista Photography

Tom Daley claimed his first gold medal of the European Championships, winning the 10m synchro event along with his partner Matthew Lee.

Bruni, Gabbrielleschi, Paltrinieri, and Acerenza threw together a winning swim of 54:09.0 to take gold in the team event.

Russia swept the gold medals on the fifth day of diving competition, being led on the men’s 3m springboard by Evgenii Kuznetzov.

In an Instagram post on Tuesday, March 23, 2021, France has announced the swimmers who have been named to the 2021 European Aquatics Championships team:

“There is no better date than this World Water Day to introduce you to the French swimmers who achieved a qualifying time for the European Championships in Budapest from May 10 to 23! 🇪🇺 Which races are you already looking forward to watching?”

Some of the biggest names that will race for France on the men’s side include two-time Olympic medalist Florent Manaudou, 2016 Olympic medalist Marc-Antoine Olivier, 2019 Worlds bronze medalist David Aubry, and 2017 World medalist Mehdy Matella.

As for the women, Beryl Gastaldello will lead the team into one of her first major international competitions since she’s made waves throughout the 2019 and 2020 ISL seasons. This will be her shot to maintain her dominance in the long course field. Gastaldello has a number of Short Course European Championship medals to her name but has yet to make an individual podium at the long course version of the meet. In 2018, she helped France to gold in both the women’s and mixed 4×100 freestyle relays at the Long Course European Championships in Glasgow.

Joining Gastaldello will be 2012 and 2016 Olympian Charlotte Bonnet and 2016 Olympian Fantine Lesaffre. They were the only two French women to collect an individual swimming medal at the most recent long course European Championships back in 2018. There, she won gold in the 200 free with a 1:54.95 and won bronze in the 100 free with a 53.35.

The other individual medalist on the women’s side, Fantine Lesaffre, took gold in the 400 IM with her 4:34.17.

Also among those set to race this weekend will be 2016 Olympians Maxime Grousset, Damien Joly, Clément Mignon, Mélanie Henique, and Marie Wattel.

Along with each athlete’s individual performance, one of the main storylines for France will be Olympic qualification in relays. To date, France has only qualified the men’s 4×100 freestyle to swim in Tokyo and has until May 31, 2021, to post a fast enough time to qualify.

The 2021 European Swimming Championships are set to take place in Budapest, Hungary between May 10th and 23rd with the pool swimming portion running in the second week of competition from the 17th to the 23rd. While the Games usually take place every two years and were originally planned for 2020, they were postponed until this year. As every second edition takes place in an Olympic year, those versions are usually not at stacked as the ones which take place in the off-year.

In a year as unconventional as 2021 in terms of re-scheduled swim meets, France has announced a fairly top-notch roster with most of its current top swimmers.