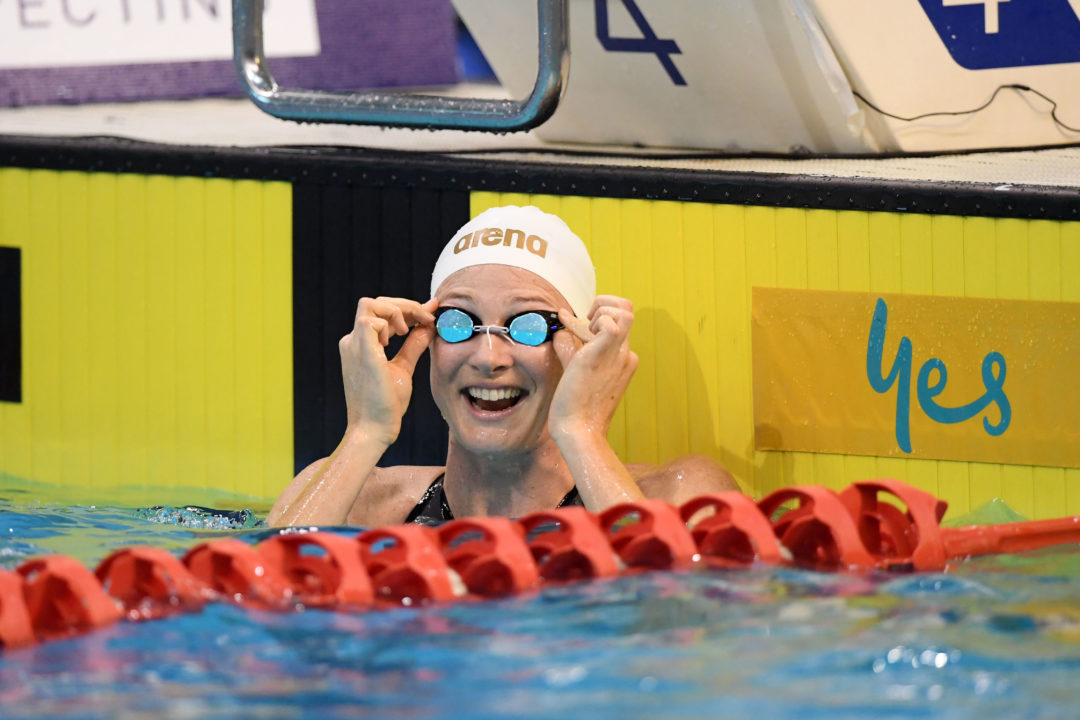 Australian athletes and staff preparing for the Tokyo Games were given priority to COVID-19 vaccines, with the rollout opening on Monday. Current photo via Swimming Australia/Delly Carr

It was announced in late April that Aussie athletes and support staff preparing for the Tokyo Games would be given priority for vaccines, with the Australian government putting Olympic participants under a priority group that includes health-care workers, Indigenous people aged over 55 and people older than 70.

Campbell, a five-time Olympic medalist, will aim to qualify for her fourth Olympic team next month at the Australian Olympic Trials.

The 28-year-old said it was a huge relief for the athletes to get the vaccines done.

“We are going into a pretty unknown situation over in Tokyo so to have this little band-aid is a huge weight off everyone’s shoulders,” Campbell said, according to ABC (Australian Broadcasting Corporation).

“I’m really glad that we can get it far enough away from the Olympics so that if there are any adverse side effects, we’ll be well and truly over them by the time it comes around to Olympic Trials.”

Campbell is reportedly one of 2,050 athletes and officials, including the Paralympic team, who will be vaccinated in the lead-up to the Olympics. Vaccine hubs have been set up in Brisbane, Sydney, Melbourne, Adelaide and Perth.

“There’s no-one who is to be vaccinated in the current cohort under the Australian Government’s system who is missing out,” Carroll said, adding that the athlete vaccines are being rolled out separately from the public system.

It remains up to the athletes whether or not they want to receive the vaccination. All those getting the vaccine are expected to have it done by the end of next week, with the second dose administered four weeks later.

Campbell is scheduled to compete in the last real tune-up meet before the Trials, which will run June 12-17, at this weekend’s Sydney Open (May 13-16).

Unless there is a proven conformation that the vaccine boosts the performance I would not recommend to do it so close to Olympic Games. You are putting something in your body that changes it. Something that you don’t really know what. And I’m not talking about big changes like side effects. Even a small deviation from the best form can cost them a podium at Games. All these athletes are healthy young people who can live a little bit more in the sort of bubble. Just two more months of restrictions. And then do whatever you want.. Why to get extra risk. Just be more cautious.
What vaccine will they get? “Novichok”?. Demn it! Why am i keeping confusing… Read more »

I was wondering that too. The linked article names AstraZeneca.

Within a month, I’d think that you could say the training disruption would matter. This far out I think it’s worth it. You could say there’s a performance boost of not having to worry as much about COVID at the global mixing pot/potential superspreader event that is the Olympics

For the overwhelming majority, it will be the Pfizer jab as the current vaccine policy has been amended to Pfizer for people under 50 (due to the blood clotting issues with Astra Zeneca globally in that age bracket). Those over 50 will get the Astra Zeneca jab ……. or they can hold off pending further changes and/or release of other alternatives into the AUS market.

What “what”? What didn’t you get? That vaccine changes your body at cell level? Look, every body has to measure two risks against each other.
If you don’t take a vaccine and are going to be in situation with high risk to get infected and if you expect the illness to be severe in your case then this risk is higher then the risk to develop strong side effects after vaccination.
But if the chances to be infected are low then risk to get sick after vaccination has to be considered.
I didn’t get vaccinated all this time. There was no need for that. But I’m planning for Omaha in a month and therefore I got a… Read more »

So that you understand: you are receiving downvotes because you are overplaying the risks while simultaneously understating the benefits of the vaccine.

Thank you for explanation. Now i know. That simple. How didn’t I realize it myself? That is why I love swimswam. There always be a person who can clarify the most complicated things.

Don’t take this the wrong way but chances of getting your lungs wrecked by covid (even without preexisting conditions, like Milak) is much much higher than having any issue with the vaccines currently available in Australia.

I hope that Cate will prove all of the keyboard warriors wrong this summer.

YEAH! So that she can sit behind her keyboard and pound out another scathing review attacking people and posting it online.

Kind of ironic, iddn’t it?

Are you suffering post lockdown.trauma? You need to learn how to swim for relaxation & release of toxins .

Getting the vaccine is already free money for big pharma.