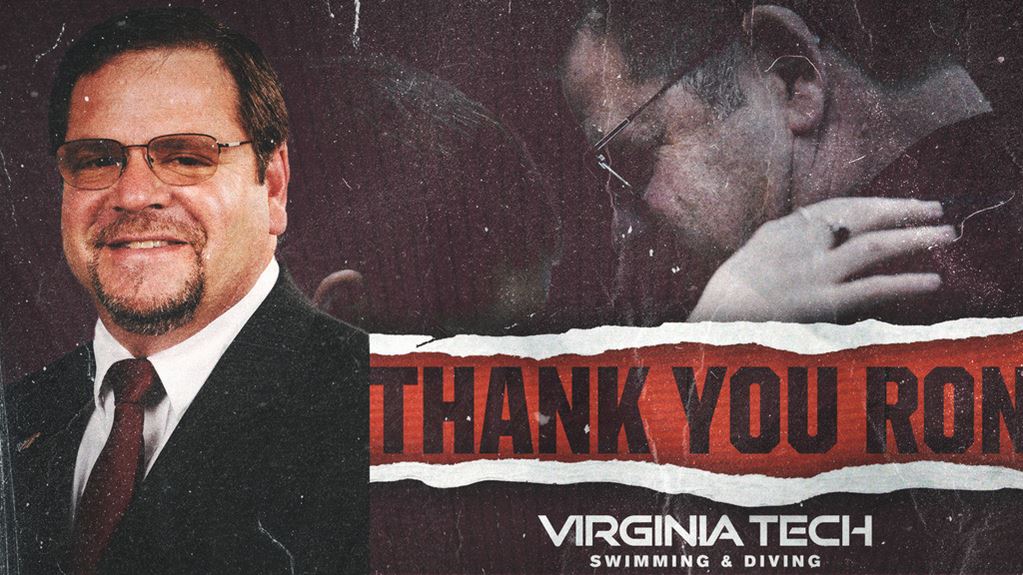 After a 15-year career at Virginia Tech, head diving coach Ron Piemonte has announced that he will retire this summer. Archive photo via Virginia Tech Athletics

Virginia Tech head diving coach Ron Piemonte has announced his retirement after 36 years of coaching, including the last 15 with the Hokies.

As head diving coach, he has led 38 Hokies to All-America honors – 18 being Honorable Mentions. Piemonte is also a two-time ACC Women’s Dive Coach of the Year in 2014 and 2015.

Piemonte took over the diving program at Virginia Tech shortly after the school joined the ACC. Prior to his tenure, the school never had a diving All-American. By 2008, Mike McDonald won two honorable mention awards, and a year later he won two more. From there out, Virginia Tech divers became a consistent presence in finals at the NCAA Championships. That included a 3rd-place finish from Kaylea Arnett on 1-meter at the 2014 championships.

Arnett is the only four-time ACC Female Diver of the Year in conference history.

Prior to coming to Virginia Tech, he worked in club diving, and in 2005 was named the USA Diving Junior Coach of the Year at Moss Farms Diving in Georgia. He also served as Vice President in charge of junior diving for USA Diving. Prior to that he spent 10 years at the Tualatin Hills Diving Club in Oregon, and as the head coach at the University of New Mexico while running a nearby junior club.

He is a 6-time USA Diving National Team Coach.

As an athlete, Piemonte competed at the national level from 1974 to 1985. He was a Pac-10 champion while at Arizona State and an NCAA finalist.

“It is hard for me to express in a few words what Coach Ron means to Virginia Tech and to me, personally. Ron is one of the top diving coaches in the country, and his divers have performed at the highest level in the ACC and NCAA Championships since he came to Blacksburg almost 15 years ago.

“The way Ron treats his divers (and all the swimmers and coaches) during practice, at meets and outside of the water, is exceptional. He is always looking for the well-being of the person and always ready to help and support anyone. I have watched him coach for the last three years on the pool deck almost daily and it always impresses me the way they train and execute practices.

“Personally, I could not be more thankful for Ron and Tina for opening their home to my family and convincing me to be their neighbor. Both of them have been one of the big reasons why Sandy and I are so happy here, and I am looking forward to continuing our friendship for many years.”

“Ron has been one of the most amazing coaches. He has taught me so much more than just learning how to enter the water and do big dives. He has taught me to believe in myself. I am beyond blessed that I have had the opportunity to be coached by him these past three years. Although he is moving on in life, he will forever be the genius in diving. Thank you, Ron, for the best three years of my college diving career!”

“One thing that Ron always said to me was that, ‘you are only as good as you believe you are.’ This stuck with me in a way that I could have never imagined. Ron was a phenomenal coach and even better person. A lot of coaches out there will preach perfection, but Ron preaches confidence over anything else, and that is why he is one of the best coaches I have ever had. I am going to miss him a lot, and I am grateful to have been able to dive for him these past three years.”

Ron is amazing at all levels and we are sad that he will no longer be coaching but we are very happy for him. Personally he has been amazing to my family and I have only gratitude towards him and his wife. Congrats Ron!

Piemonte back to alma mater, ASU?