3 Big Things From the First Night of Canadian Olympic Trials 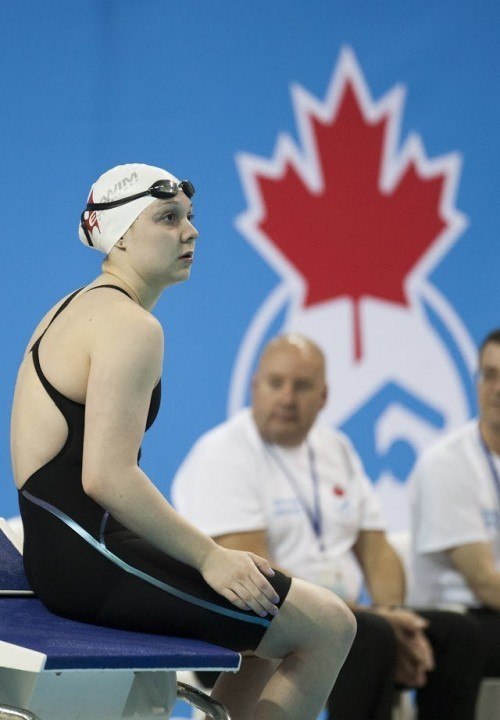 Brittany MacLean and Penny Oleksiak both took down Canadian records in extremely convincing fashion. MacLean won the women’s 400 freestyle in a time of 4:03.84 breaking her own Canadian record of 4:05.06, which she posted at the 2012 London Olympics. The closest she has been to that time since is a 4:05.91 that she put up at the 2014 Pan Pacific Championships.

Oleksiak made some astonishing improvements over the last 24 hours. Coming into the competition the 15 year old had a best time of 58.44, which she recorded at the Eastern Canadian Championships just over a month ago. Oleksiak won the women’s 100 butterfly in a time of 56.99, breaking Katerine Savard’s record of 57.27, thus becoming the first Canadian to swim under the 57 second mark.

The first upset came in the men’s 100 breaststroke where Jason Block beat defending Canadian champion Richard Funk. Funk came into the meet as the favourite after making the making the semi-finals in the event at the World Championships and recording a best time of 1:00.26 in the preliminaries in Kazan. His time in Kazan was faster than the FINA A standard of 1:00.57.

After finishing fifth in the 100 butterfly at the World Championships in Kazan 2014 Commonwealth Games gold medalist and Canadian record holder Katerine Savard came into the trials with a goal earning the opportunity to swim the 100 butterfly at her second Olympic Games. Savard has been pushed by Noemie Thomas, who finished second in tonight’s final, in the past, but tonight she was shocked by 15 year old Penny Oleksiak won the event breaking Savard’s Canadian record in the process.

In the end Savard finished third missing the Olympic team in her best event.

The 200 freestyle was not a huge upset, but an upset nonetheless. Defending Canadian Jeremy Bagshaw won the national title last spring in a time of 1:47.48, a time that is faster than the FINA A standard of 1:47.97. Tonight Bagshaw was beat by 18 year old Markus Thormeyer who won the event in a time of 1:48.17.

One of the things that an Olympic trials so compelling is that the work a swimmer has put in throughout their career comes down to one moment. When a swimmer misses a cut by a narrow margin it is heart breaking to watch. Tonight three athletes were less than half a second away from their Olympic dreams.

CAN Richard Funk? Not today, he got blocked. Hopefully he CAN Funk in the 200 though!

Noemie Thomas has just swum 57.02 in long course.
I doubt that Kelsi Worrell will swim much faster than Thomas’ long course time next summer. Maybe 56.50 but nothing close to the 1.36s gap which exists in yards.

3 conclusions:
SCY and LCM are 2 different sports.
Thomas is a much better long course swimmer.
Worrell has improved a lot her long course but is still by far a better yards swimmer.

Bobo,
Did you not declare a short while ago that US college swimmers are being disadvantaged against the whole world because they trained in SCY?
Poor Thomas and MacLean then.

And I believe Noemi Thomas is fully tapered while Worrell has not swum LCM fully tapered this season. Let’s wait what she can do at the US trials.

As for Thomas being slower in SCY compared to Worrell; let’s wait until the end of both of their NCAA career and see if Thomas can close the gap. After all, Thomas is from Canada and only a sophomore at CAL therefore has had much less SCY training than Worrell had.

To be fair to Bobo, there was a time not so long ago when Swimswam commenters would bring up how much Cordes would improve LCM when he graduates and stops swimming SCY…

I actually remember debating it as I said in 2014 Peaty had a lot more potential – Cordes mainly swimming SCY was one of the big arguments people used about his LCM potential.

So it is actually a theory many of these forums subscribed to when it suited them.

As I wrote above, I don’t disagree with the notion that SCY and LCM swimming can be very different.

I only disagree – strongly – with her example of Thomas and Worrell to illustrate the differences.

Just wait and watch Cordes at trials…. He will break 2:07 in the 200. Now that he is training under Sergio and actually doing workouts on a consistent basis, he is a gold medal contender.

It always seems to me that Bobo Gigi is saying SC (yard or meter) are very different from LC – using success in one format to predict performance/success in the other, especially in the same year, is highly unreliable. And most seems to agree on that part. But as soon as he mentioned swimming more SCY may hurt a swimmer’s performance in LC, so many won’t accept that could be true for even some swimmers?

To quote here, “After all, Thomas is from Canada and only a sophomore at CAL therefore has had much less SCY training than Worrell had.” – does it not implied that with more SCY training, Thomas can be better in SCY. Would you agree… Read more »

Spectatorn,
A few weeks ago, Bobo Gigi claimed strongly that All US college swimmers are at disadvantaged against all non US swimmers since they trained in SCY pool all year around.

How does he know that?
This implied that no NCAA swimmer trained in LC pool for the past one year right up to the Olympics. Seriously?
And disregarding completely the facts about US post grad and/or professional swimmers.

About the “many SCM WR holders who didn’t break LCM WR”, has it ever occurred to you many legend swimmers very rarely swam/focused in SCM thus giving chance to other “lesser” swimmers to break SCM WRs ?
Coughlin used to casually break SCM WRs swimming… Read more »

GR Swimmer – Why would you say Noemi Thomas was “fully tapered” at Trials? She did have the NCAAs 2.5 weeks ago …

Bill G,
Are you saying that Noemi Thomas is not fully tapered for the Olympics trials?

Was she in full training 2.5 weeks ago at NCAAs? If yes, then I would agree that she is “fully tapered” for Cdn Trials.

If she tapered for NCAAs, then no, I wouldn’t say she is “fully tapered” for Olympic Trials.

Having two big meets, one shortly after the other, makes it tough to optimally prepare (i.e., “fully taper”) for both meets (e.g., having to hold a taper for extended period and what not).

Absolutely, Worrell has not put up the times in long course that compare to her times in long course. Someone compared her to Cordes, and the difference in my opinion is that Worrell has been swimming a lot more long course meets throughout the season in the States and across the world, which makes me feel like she has prepared herself for the switch. Worrell is the fastest American and the favorite heading into Trials, and I think that 56.5 is completely possible for her given her focus on long course this year was definitely more than usual. Worrell is so strong on her underwaters, and that’s helped her obliterate a lot of top-level swimmers short course, but I think… Read more »

Canadian women’s team is stronger than ever. With plenty of young talents. MacLean back at her very best.
Their freestyle relays are now very strong medal contenders in Rio.

The men….
except Condorelli?

She swims NCAA and trains in SCY, so she will lose, right?

If you mean in swimming, I guess it is Cochrane

Who is Canada’s most decorated Olympian? I can’t recall any maybe I haven’t been around long enough.

What happens when no one beats the Fina standard in the men’s 100 breast??? Does the winner even get to go to oly or does Canada send no one??

I believe they have another selection process afterwards and can award a spot to someone even if they haven’t met the standard.

send no one, but possibly an IM relay

In another narrow miss, Taylor Ruck was just 0.85 seconds off getting the 2nd olympic spot in the 400 free.