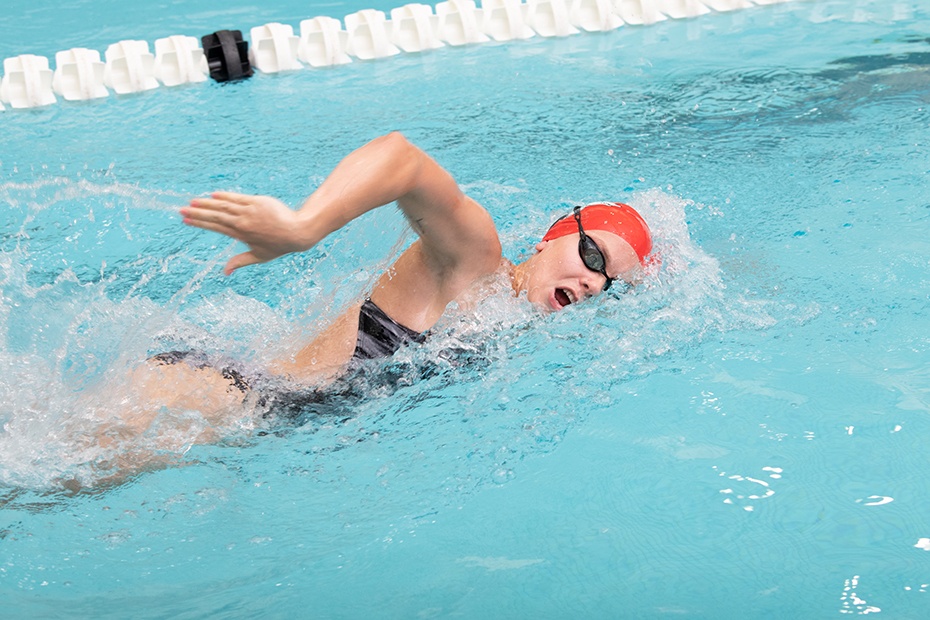 Missouri is the best team at their home invitational, but Arkansas' Anna Hopkins is a star-in-the-making for Arkansas. Archive photo via Arkansas Athletics

The 2018 Missouri Invite will be headlined primarily by the host team, with the actual biggest storyline being a measure of how well the team is doing without their head coach Greg Rhodenbaugh on deck. Rhodenbaugh was placed on paid administrative leave in October while the school enacts a Title IX investigation resulting from formal complaints by a member of the women’s swim team.

That aside, we know that Missouri in the Rhodenbaugh era has been a Frank Busch-esque “mid season” team. In other words, they try and pile up as many NCAA invite times mid-season as they can, even moreso than most programs, and then train through the conference meet until NCAAs. This tactic was famously used by former Arizona head coach Frank Busch, and has been used in programs run by many of his proteges, including Rhodenbaugh at Missouri.

With Andy Greveres as acting head coach, the team will probably stay the course until they know more about Rhodenbaugh’s status, so expect lots of big times from the Tigers this weekend at a home pool.

While Missouri will likely roll to the team title at this meet, many of the schools in attendance bring reasons to watch them as well. Here’s 3 big storylines to follow this weekend:

1. Anna Hopkin in the Sprint Frees – if you haven’t been paying attention to what’s been happening in Arkansas, junior transfer Anna Hopkin has been on fire. She currently ranks 7th in the country in the 50 free (22.25) and 8th in the 100 free (48.66) all while swimming in her first-ever season in yards. Arkansas’ best 100 freestyler last year Olivia Weekly went just 22.92 and 50.07 (and graduated), and Hopkin’s swims are already Arkansas school records. So why haven’t you heard of her? She’s British and a transfer from the University of Bath, where she was the 2017-2018 BUCS (British Universities and Colleges Sport) Sportswoman of the Year last year. She’ll probably only get 2 years of eligibility in the NCAA, but she’s making the most of those 2 years. Her races again Annie Ochitwa of Missouri, an NCAA qualifier last year, will be the highlight of the meet.

2. Non-Division I Powerhouses – While Drury doesn’t have the same stranglehold on Division II swimming that it once did, they’re still a national power, and have 14 times ranked in the top 5 of Division II swimming so far this season. That includes junior Erica Dahlgren in the 500 free, where she’s seeded 1st in 4:56.75. She broke the Drury school record in the event last season, and won GLVC conference titles in the 200 free, 500 free, and 1000 free (which is an NCAA Championship event at the D2 level).