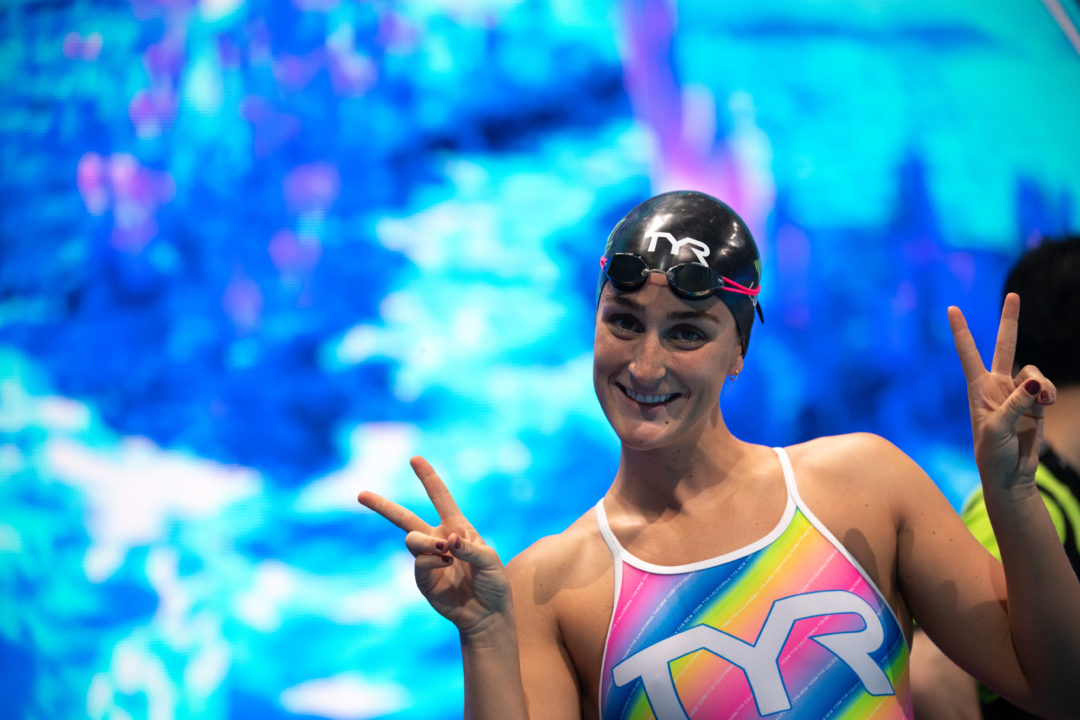 In Smith's absence, Mariah Deningan will enter the final as second seed to Hali Flickinger while Ally McHugh moves to the #3 spot. Archive photo via Mike Lewis/Ola Vista Photography

Friday night finals at the Indianapolis stop of the 2021 Pro Swim Series will feature the men’s and women’s 200 freestyle, 200 backstroke, 400 IM, and 100 butterfly. As was the case on Thursday, there are not many top-seeded scratches to report heading into the finals session.

Leah Smith is the highest-seeded swimmer to scratch an event, opting not to swim the 400 IM which she would have been entering in 2nd place. During the prelims, Smith posted a 4:42.93 which was behind only Hali Flickinger‘s 4:42.61. With her scratch, Smith will only race the 200 freestyle in which she is seeded 2nd behind Paige Madden. Her scratch in the 400 allows Mariah Denigan to move up to the #2 spot and Ally McHugh the #3.

Smith’s scratch also would have given 17th seed Charlotte Hook a second swim as a member of the B final but Hook decided to scratch, giving 18th seed Claire Donan the spot instead.

In the women’s 200 backstroke, both Amy Bilquist and Beata Nelson scratched from the A final, giving up their respective 6th and 8th ranks from the prelims. During the morning session, Bilquist posted a 2:14.21 while Nelson was a 2:14.93 but neither will race the event again at night. The scratches would have moved both Mariah Denigan (9th) and Ali Galyer (10th) into the A final but Deningan also scratched. allowing 11th seed Anna Freed to claim the last spot in the A final.

15th and 16th seeds Sierra Schmidt and Joanna Evans were the sole scratches in the women’s 200 freestyle while Alfonso Mestre gave up his 12th place spot on the men’s side of the event. In the men’s 200 backstroke. Emils Pone and Matt Grevers were slated to swim in the B final, having qualified as 10th and 11th but both opted out of the second swim.

With only 14 total swimmers in the men’s 400 IM prelims, all entrants qualified to swim the event again but Ricardo Vargas Jacobo and Alexander Lebed both scratched the B final from 9th and 12th, respectively leaving only Jack Dubois and Tristan Dewitt to swim the consolation.

There were no scratches in either of the men’s or women’s 100 butterfly finals.

Day 3 finals will get underway with the women’s 200 freestyle at 6 PM EST.

Unless your katinka hosszu or Michael Phelps 😉

Leah Smith is still on the 200 Free start list. Is she going to swim that one?