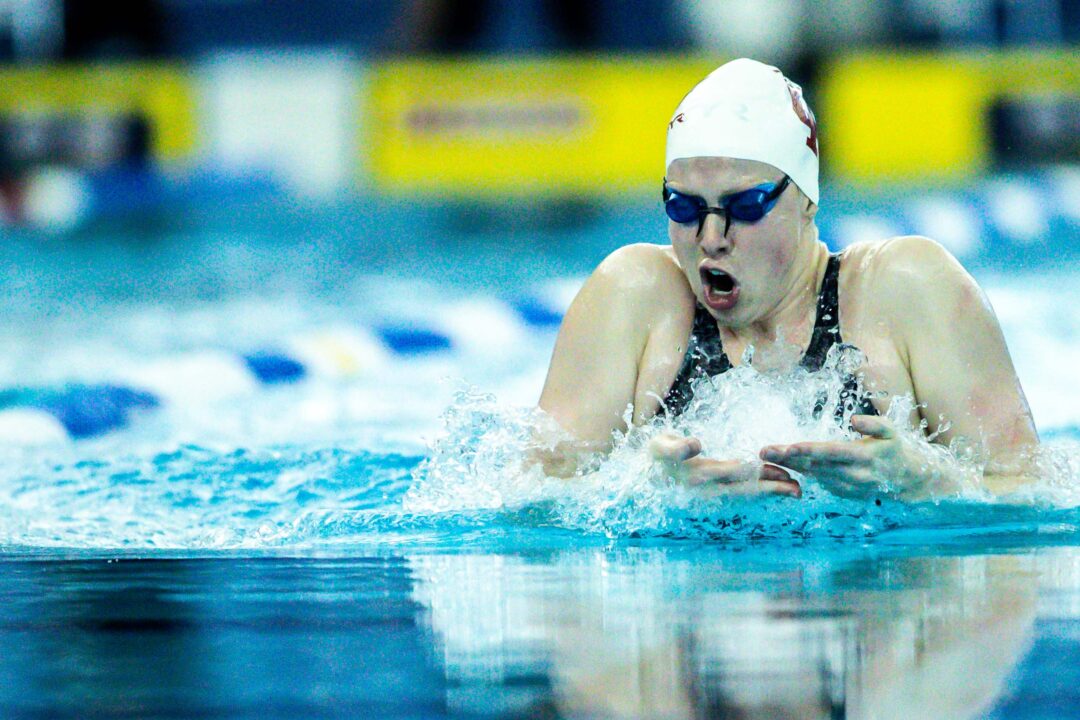 With Tatjana Schoenmaker seemingly absent from this event at World Championships, does Lilly King have the 200 breast gold on lock? Current photo via Jack Spitser/Spitser Photography

With the potential looming absence of world record holder and Olympic champion Tatjana Schoenmaker, Lilly King comes into the 2022 World Championships as the leading candidate for gold in the women’s 200 breaststroke.

King rocketed to a best time of 2:19.92 during the Olympic final last year to claim silver behind Schoenmaker (2:18.95), shaving more than a second off her previous PB of 2:21.19 from the U.S. Trials two months earlier.

As the only woman in history sub-2:19 in the event, Schoenmaker would certainly be the gold medal favorite in Budapest, but it’s still unclear whether or not she’s planning on making an appearance at the meet.

Last month it was reported that she would be skipping the World Championships in order to focus on the Commonwealth Games later in the summer, but then she was listed on South Africa’s roster that was released in May.

For the purposes of this article, we will omit Schoenmaker from our predictions until we get confirmation that she has changed her mind about racing at the meet.

Without a clear answer on whether the world record-holder will be racing in Budapest, we’ll go with the Tokyo silver medalist as our pick for gold.

King, the 100 breaststroke world record holder, has been clearly focusing more on the 200 in recent years and is one of few women in history who has been under 2:20.

She has a massive edge in speed on every swimmer in the field, and over the last few years, has improved her ability to use that to her advantage while still coming home strong.

King was joined on the Olympic podium last year by training partner Annie Lazor, who finished third in Tokyo in a time of 2:20.84. While Lazor qualified to swim in Budapest in the 50 and 100 breaststrokes, Lazor was just short in the 200 at Trials, as NCAA star Kate Douglass powered to a time of 2:21.43 for second place.

Douglass, the 2021 Olympic bronze medalist in the 200 IM, will make her international debut in the 200 breaststroke this summer. The rising University of Virginia senior’s long course 200 breast was greatly anticipated after she won the NCAA title in March, breaking King’s all-time record in 2:02.19.

That anticipation paid off at Trials when she delivered that 2:21.43 to make the team, upsetting Lazor. That time would have earned fifth last summer at the Olympic Games, ahead of South Africa’s Kaylene Corbett.

She wasn’t able to get under 2:22 in Tokyo and finished sixth in the final in a time of 2:22.65. Her season-best for 2021-2022 is 2:25.47, which she swam at the Barcelona stop of the Mare Nostrum Tour. Notably, Renshaw didn’t race this event at British Trials, but was pre-qualified for Worlds thanks to her swim from the Olympics.

Renshaw’s best post-Olympic performance thus far was a short course swim where she threw down a bronze medal-winning time of 2:17.96 at the 2021 World Short Course Championships. A quick short course swim, combined with a relatively recent best time of 2:20.89, makes Renshaw a contender to become the next 2:19 breaststroker.

While Renshaw sat out of Trials, her fellow Olympian Abbie Wood was present and won the event in 2:24.28. Wood followed that up a few weeks later by clocking 2:25.90 for silver at Mare Nostrum, with both swims quicker than her 2:23.72 from the Olympics. Like Renshaw, Wood’s best time doesn’t come from the Games, but from a few months before that at British Trials.

Wood posted back-to-back 2:21s at British Trials (2:21.69) and the European Championships (2:21.86) last year, meaning that, like Douglass and Renshaw, if she gets down to PB range, she’ll be in the mix for a podium finish.

The only other women who have cracked 2:22 since January 2021 are two women who won’t be able to swim at Worlds this year: Evgeniia Chikunova and Yuliya Efimova. Without those two Russians racing this summer, the next women to talk about are those who have a PB of 2:22.

Even with the potential absence of Schoenmaker, South Africa’s medal chances in this event are not entirely gone. That’s because Schoenmaker’s countrymate Kaylene Corbett will likely be among those racing in the 200 breast at the World Championships following her fifth-place finish at the Olympics and her recent swim of 2:24.66 in April. Corbett’s best time of 2:22.06 from the Olympics keeps her in the running, but likely won’t be enough to get on the podium. Chances are she’ll need a PB to collect some hardware.

While Corbett will attempt to beat her 2:22.0 best, Switzerland’s Lisa Mamie will be attempting to beat her nearly identical PB of 2:22.05. Mamie posted that time a few weeks before the Olympics last year at the European Championships. She had a solid prelims swim in Tokyo of 2:23.91, but then fell to a 2:25.11 for 14th overall in the semi-finals. Mamie has swum a few in-season 200 breaststrokes this season, peaking at 2:26.87

According to the leaked Chinese roster for World Championships, Yu Jingyao is expected to make an appearance in Budapest this year. She raced for her country last summer at the Olympics, posting a 2:23.17 in the prelims and a 2:24.76 for 12th in the semis. After missing the final at the Games, Yu came back better than ever in September 2021 and delivered a new PB of 2:22.61 to assert herself into the conversation this season.

With no real clarity on how fast she’s been this year so far, it will be exciting to see how Yu performs at Worlds. That 2:22.61 is promising and has us wondering if she can fight her way to a spot on the podium or get under Qi Hui‘s Chinese Record of 2:21.37 set back in 2009.

To round out our list, Kotryna Teterevkova swam a Lithuanian Record of 2:22.88 in this event just a few months ago at the Lithuanian Winter Championships. Teterevkova is easily one of the fastest-improving breaststrokers in the field this season considering that she came into 2022 with a best time of 2:25.98. With one massive time drop on the books this season, Teterevkova seems to have the potential for a top eight finish in Budapest.

Other names that will likely be in the mix for a finals appearance include Tokyo semi-finalists Abbey Harkin, Jenna Strauch, Francesca Fangio, and Sophie Hansson.

Darkhorse – Kelsey Wog (Canada): After just sneaking into the semi-finals with a 16th place 2:24.27 at the Olympic Games, Kelsey Wog was disqualified in the second round of racing at the Olympics. Wog actually swam a bit quicker than that at the Olympic Trials in 2021 when she hit a 2:23.40, but the fastest time of her career comes from just before the COVID-19 pandemic began. She swam a time of 2:22.42 in early 2020, but hasn’t been back in that range since. She put up a clocking of 2:24.87 in early April to qualify for Worlds, and if she manages to find that 2020 speed once again, she could get some long-awaited redemption.

One clear darkhorse – if she’ll finally swim is Anastasia Gorbenko (ISR) who swam a SCM at low 2:19 late 2021. This may indicate a top 8 or better with her rapid progress since the Olympics. Yet, she might select to swim the 200 back which run on the same sessions. I believe it depends on her 100 Breast score earlier that week.

Fanny Lecluyse won’t be making a finals appearance as she has retired after the games.

She didn’t even qualify for the meet, so it will be the most incredible victory out of lane 9 that has ever been witnessed.

Jefimova is my dark horse if she is going to worlds

Have you been living under a rock in the past few months?

He means the Estonian swimmer Eneli Jefimova, not the Russian Efimova. Did I miss some information about that girl?

that tripped me up so much during the olympics lol, gotta keep track of which efimova it is

When will Psych sheets for Worlds be out?

I don’t know but entries aren’t even finalised until the 8th of June so still a while yet.

W200BRS in Tokyo was possibly the most memorable event of the meet, and for very positive reasons; both the race and post race. Whilst we’d probably love a sequel; its unlikely here.

Were Schoenmaker present; it would clearly lean heavily in her favour but if, as expected, she skips Budapest; this one gets more than a little murky. For all the talk of sub 2.20s; I’m not seeing this as a “given”. Whilst it’s likely that it will take a 2.20 to win; it would not surprise to see the lower steps decided in the 2.21s …. which opens the gates to the veritable rugby scrum of 2.22 swimmers.

Minus Schoenmaker and the Russians; I suspect one of the Americans… Read more »

It’s one of the few events in Tokyo that made happy.

I have Douglass winning.