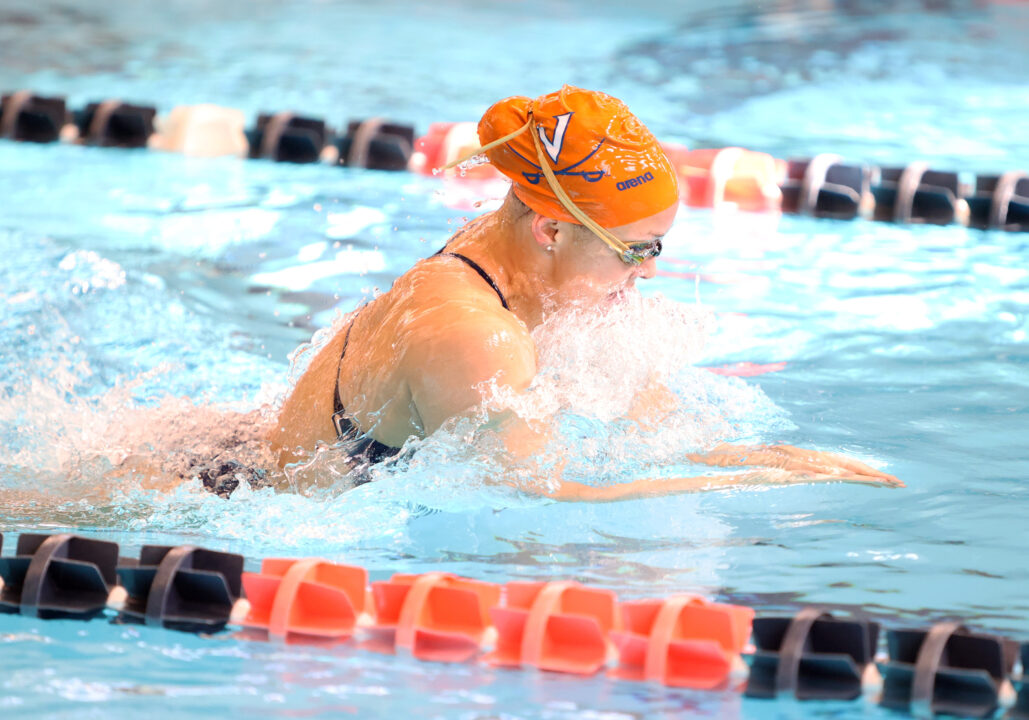 Virginia enters the 400 medley race as the American Record holder and favorite to win, but they will face the competition of NC State and Stanford. Archive photo via Matt Riley of UVA Communications

It’s easy to say that Virginia is the clear favorite in this event. Not only are they the fastest school by over two seconds, but their relay has also gotten significantly stronger over last year. At ACCs, they were almost three seconds better than their NCAAs time from last year of 3:25.13.

Gretchen Walsh’s 49.71 leadoff backstroke split was significantly faster than Reilly Tiltmann’s 50.49 from last year. Additionally, Walsh dropped from a 50.13 to a 49.71 from the individual 100 back to her relay leadoff at ACCs on the same night, indicating that she is capable of doing doubles without getting worn out. If she can repeat the same feat at NCAAs and go sub-50 again, her team is in very good shape.

Additionally, Alex Walsh surprised many by splitting 49.59 on the butterfly leg of UVA’s NCAA record relay, considering that her flat start in the 100 fly is a 51.31 (although she has only swum that race twice, at dual meets, since high school). It is also a second faster than Lexi Cuomo’s 50.62 fly split from last year at NCAAs.

Alexis Wenger has also improved from last season, going from a 57.71 to a 56.79 breaststroke split in a year.

Finally, Kate Douglass is consistently within the 46-point range on freestyle, and will most likely be the fastest woman anchoring in the field. Theoretically, as long as each swimmer on the Virginia relay does not add a significant amount from their ACCs time, the title is pretty much theirs.

However, Virginia is destined to face competition, particularly from an NC State team hungry to defend their title and take back the NCAA record. They are currently seeded second with a 3:24.78 time from when they finished second to Virginia at ACCs this year.

Katharine Berkoff is the third-fastest performer and defending NCAA champion in the 100 back, and beat Gretchen Walsh for the title in the event at conferences. Although Walsh out-touched her later in the relay by 0.04 seconds, Berkoff’s experience and consistency make it very likely that she could be faster than Walsh in the same relay come NCAAs. Sophie Hansson is of the fastest breaststrokers in the country and also beat her Virginia counterpart, Wenger, individually at ACCs this year by running her down in the last 15 meters of the race. Kylee Alons split 49.80 on butterfly at ACCs, and can likely keep up with Alex Walsh.

However, the one issue for NC State is that their two fastest 100 freestylers are both stronger on other strokes. Abbey Webb anchored their relay at ACCs in a 48.27 freestyle leg, which was over two seconds slower than Douglass’s 46.25. None of their other freestylers aside from Berkoff and Alons have been within a second of Douglass’s anchor leg, and this will prevent them from catching up to Virginia–no matter how strong the other three legs of their relay are.

Stanford is seeded third with a time of 3:25.54, and after finishing 8th at NCAAs last year, they are re-invigorated this year with a relay stacked with three elite Olympians.

However, Stanford also has a hole in their relay that will prevent them from catching up to Virginia–the breaststroke leg. Allie Raab is currently the best breaststroker for the Cardinals, and she split 59.18 on the Stanford Pac-12 relay. She has split as fast as 58.18 before, and although that is a good time, it is is far from what Hansson and Wenger can produce. Just like NC State, the other three legs of the relay will not be fast enough to make up for the gap in Stanford’s breaststroke, so their chances of winning are very slim unless Raab has a major drop in time and Virginia messes up.

It is important to note that every single swimmer listed above will be swimming individual events prior to this relay, and although most of them did the same thing at conferences, NCAAs being a single-gendered meet gives them less time in between events (particularly Virginia and NC State, who swam their seed times at a double-gender ACC meet). However, the 400 medley relay being moved to day 3 of the meet this year prevents it from being on the same day as the 200 free relay, which will give some swimmers one less race to worry about. In addition, the timed finals format of the relays will reduce the hassle of deciding who to put on prelims and finals relays.

Aside from UVA, NC State, and Stanford, there are many other schools looking to make an impact in this relay. The fourth through eighth seeds are all within 0.9 seconds of each other, making for a really close race.

Olivia Bray, Anna Elendt, Emma Sticklen, and Kelly Pash combined for a 3:26.32 time that puts Texas at the fourth seed. Elendt emerged as a big star at Big-12s, and she split a 56.42 on breaststroke, which was the fastest breaststroke split ever for a swimmer not named Lily King on a 400 medley relay. In addition, she also improved nearly two seconds in her individual 100 breast in a season, which is a very promising sign for Texas. Bray split 50.87 on backstroke, nearly a second faster than Julia Cook’s 51.78 from last year. She could also be put on the fly leg of the relay, where she split 50.43 on last year’s NCAA relay. However, Bray already has the 100 back/100 fly double on the same night of the race, so we do not know if she will be worn out come time for the relay. Pash split 48.39 on the freestyle leg, but has been as 47.57 as an anchor.

Texas added nearly a second from conferences to NCAAs when they finished third in the race last year, but could be in contention with the top three if they can perform to their full potential this year.

Another team led by a strong breaststroker is Ohio State. Their fifth-seeded time of 3:26.35 from Big Tens this year is significantly faster than their NCAA time of 3:30.22 despite having three of the same swimmers on both relays. Hannah Bach went from a 57.99 to a 57.01 on breaststroke, and also became the #3 performer in 50 breast this year as well. Katharine Zenick made huge drops from last year to this year, going from 51.70 to 50.93 on butterfly. Backstroker Emily Crane improved from 52.37 to 51.79, and Amy Fulmer split a massive 46.55 on freestyle at conferences, 1.61 seconds faster than now-graduated Taylor Petrak’s 48.16 split from NCAAs.

Although Ohio State was also slower at NCAAs than conferences last year in a seventh-place finish, they will most definitely improve as long as every swimmer on their relay does add a significant amount of time.

Alabama and Tennessee went 1-2 and SECs this year and come in as the sixth and seventh seeds with times of 3:26.64 and 3:26.88 respectively.

Overall, Alabama’s seed time is over four seconds faster than their 2021 NCAAs time of 3:30.69. Freshman Avery Wiseman will be a huge boost for the Tide, considering that she split 58.02 at SECs–1.45 seconds faster than Diana Petkova’s 59.47 from NCAAs. If Morgan Scott swims this relay unlike last year, she could help the team in both the fly and free legs.

Tennessee finished fifth last year with a time of 3:29.81. Freshman Ellen Walshe split 49.75 at SECs this year on fly, which was a major reason for the team’s improvement in time. However, the 400 medley relay also falls on the day that she has the 400 IM/100 fly dirty double, so it is unlikely that she will have much left in the tank at the end of the night. Freshman Josephine Fuller went 52.32 on backstroke compared to Olivia Harper’s 53.70 NCAAs split, which also accounted for the major time drop.

Michigan sits at the eighth seed with a 3:27.22 seed time, and was fourth at NCAAs last year. They will definitely benefit from Maggie MacNeil, who can swim elite times in backstroke, butterfly, and freestyle. She will most likely swim backstroke on the medley relay, and has been as fast as 49.76 in the 100 back. Just like in the 200 medley relay, freshmen Lettia Sim and Linsday Flynn have stepped up in breaststroke and freestyle, combining to be 2.7 seconds faster than Michigan’s breast and fly legs from last year.

The Cal women were DQed last year at NCAAs, but their unofficial time of 3:26.26 would have placed third in that relay, 1.57 seconds faster than actual third-place finisher Texas. Although they are seeded 10th coming into this meet with a time of 3:29.68, they return all four of their relay members from last year, and could make the top 8 if they taper well for the meet.

Overall, the relay has gotten significantly faster in a year, with all of the top 8 seeds being quicker than the time it took to place third last year.

Dark Horse: Wisconsin- Wisconsin is currently entered as the 14th seed with a time of 3:30.66, and did not race in this event last year. Phoebe Bacon lead off with a 52.15 backstroke leg in their relay at Big Tens, way off of her best times in the 100 back. She has been as fast as 50.39, and if she goes a time similar to that at NCAAs, Wisconsin’s relay could be significantly faster and contend for the top 8.

This pretty good, but I but huske is well into 48.

No way Alex is outsplitting Huske on this relay

Just imagine if Stanford had some 56.7 breaststroker… they’d have AR holder (Regan Smith) on back, 56.7 BR, LC AR holder (Torri Huske) on Fly, and CAN Record holder (Taylor Ruck) on free.

There’s 3 of those in NCAA swimming. Pretty pointless exercise to imagine.

So Stanford over NCSU despite being 3 seconds slower in the breast? Free leg not that much stronger

Raab was 2.28 seconds slower than Hansson and split 58.18 at NCAAs last year (a whole second faster than she was at Pac-12s), and plus Huske can go a lot faster than 50.28. I think that makes up for the gap and gives Stanford the edge.

That’s true, but NCSU swimmers will be faster also. Should be a good race.

And uva a little slower.