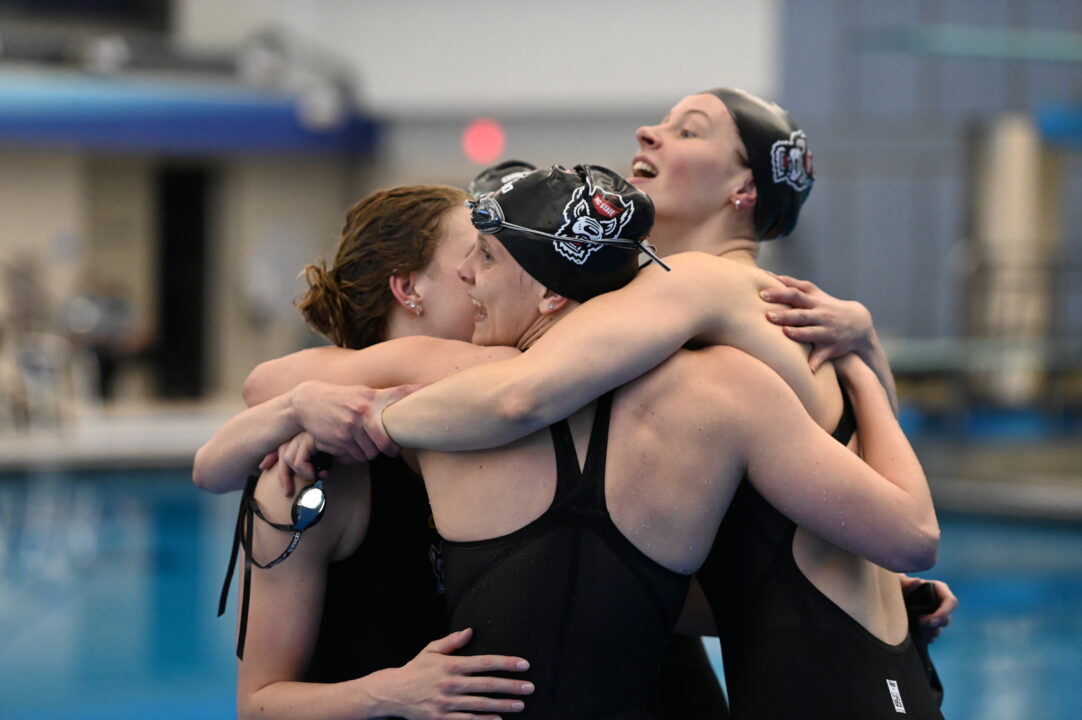 A move to day 1 of the 2022 NCAA Championship meet means an expectation of fast times for the women's 200 medley relay. (Above: last year, NC State swept the medley relays). Archive photo via NCAA Photos

I will start with the boldest prediction in this preview: a whole lot of records will go down in this 200 medley relay.

Last season, Virginia swam under Stanford’s old NCAA Record in the event at the ACC Championships, but then added more than a second at NCAAs – where they were beat by NC State, who almost cleared that old Stanford record as well.

Both teams graduated only one leg of their respective relays. For NC State, that was senior Sirena Rowe, who split 22.73 on the butterfly leg – the third-fastest split of the field on that leg.

Both teams did a pretty good job of filling those spots. For NC State, sophomore Abby Arens slid into the butterfly leg at ACCs and split 23.00. That’s a little slower than Rowe split at NCAAs last year, but the groups final time of 1:33.25 was almost the same thanks to improvements from the bookends Katherine Berkoff and Kylee Alons.

As for Virginia, they got a lot faster from last season. That was driven by the addition of freshman Gretchen Walsh, whose 22.82 split on the backstroke leg at ACCs in February was .88 seconds better than Gmelich’s split from the old American Record time at last year’s ACC Championships that makes her the first woman under 23 seconds in that event.

Their other three legs, Alexis Wenger, Lexi Cuomo, and Kate Douglass, all got much faster, and the result was an absolute annihilation of the US Open/NCAA Records by 1.12 seconds. In a 200 medley relay, that’s a lifetime.

On paper, the obvious pick is Virginia. NC State might have the 2nd-best 200 medley relay in history, but it’s still not clear where they’re going to find another 1.4 seconds from ACCs to catch the Cavaliers.

But, Virginia was also the pick last year, and NC State showed up in this relay while the Cavaliers faltered.

When the 800 was moved to day 1 a few years back, the times lurched forward (that’s when we started to see a lot of 1:29s in the men’s 200 free on relay leadoff legs, for example).

Having this race first will have a few outcomes. For one, it increases my confidence in a record-setting swim, because everyone will be fresh.

Two, if that record comes, it will light up the meet for the rest of the weekend and create an atmosphere both for athletes and fans that could lead to more great swims.

And three, I think that gives Virginia more confidence in their ability to win this year. When the race isn’t in a deep session, there are fewer variables like doubles (or triples), emotional impacts of prior swims in the session, or awards ceremonies.

I tend to think that fewer variables benefits the favorites.

Virginia is the pick here, but they’ll need to show up ready to race – unlike last season.

Best of the Rest

If it feels like the conversation for the championship is centered on just two teams, that’s because it is. We can’t totally count out teams like Ohio State and Alabama, both of which swam 1:33s at their conference championship meets.

Last year, both teams peaked at their conference meets and added time for the NCAA Championships. While both teams are faster this year than they were last year, that pattern doesn’t bring much encouragement that they can get to the 1:32 that it will take to win this relay.

The Buckeyes graduated only one swimmer from their 200 medley relay last season, their anchor Taylor Petrak, and freshman Teresa Ivan has been a pleasant surprise in filling in that spot. Ivan came out of high school with a 22.4 flat-start best in the 50 free, which she improved to 22.2 at the Big Ten Championships. Her 200 medley relay split of 21.63, though, was far-and-away better than her flat-start swims, thanks in part to a tight .12 takeoff time.

She’s holding serve on the anchor, while the rest of the relay is just simply faster. The biggest difference is Hannah Bach, who continues to be one of the breakout swimmers of her generation at the collegiate level. She split 25.51 at Big Tens on the 200 medley relay, as compared to 26.5 at NCAAs last year. That’s only .15 seconds short of Lilly King’s best-ever medley relay split.

I don’t think Ohio State head coach Bill Dorenkott could have hoped for Bach to be in Lilly King territory even in his wildest dreams.

Continuing trend, Alabama also only graduated one swimmer from last season, breaststroker Kaila Wong, but again: they’ve found a more-than-able freshman replacement in the form of Avery Wiseman. Wiseman’s 26.35 split at SECs is 1.01 seconds better than Wong was at NCAAs last year.

Ohio State enters the meet with a three-tenths better seed than Alabama, and Alabama had the bigger add from conference to national meets last year.

There are a few relays hanging around that have to be in this conversation for 3rd place, at least, as well: Texas, Stanford, Tennessee, Michigan, and Cal. Texas swam 1:34.04 at Big 12s. That would have placed them 2nd at last year’s NCAA Championship meet. They return all four legs of that relay but have replaced one, Grace Cooper. Her classmate Emma Sticklen filled in at Big 12s with a 21.60 – faster than Cooper was last year.

Stanford has a top 3 caliber 200 medley relay on their roster. Unfortunately, they’re not quite deep enough at the top end to use it, and without an elite level breaststroker, it makes sense for them to slough this one. At Pac 12s, they only used Regan Smith among their stars, and I expect them to do the same at NCAAs (it’s probably the smart move points-wise, anyway).

Michigan has Maggie MacNeil, who is the newly-minted World Record holder in the 50 back in short course. While she’s also the Olympic gold medalist in the 100 fly, Michigan uses her on the backstroke leg of this 200 medley relay.

Michigan has a much better relay than they did last season where they were just 16th at NCAAs. Freshmen Letitia Sim (26.75 breaststroke) and Lindsay Flynn (21.40 freestyle) were a combined 2.57 second upgrade over the respective Wolverine legs at NCAAs last year (both of whom are still on the roster, by the way).

While everyone seems down on Cal, we have to remember that they were 4th at last year’s NCAA Championship meet, and none of those legs graduated. They were only a 1:36.0 at Pac-12s, but Teri McKeever knows how to taper as any coach in the NCAA, and Izzy Ivey is another swimmer who had to deal with the triple last year but won’t this year. Cal’s relay has 1:33-high potential.

And then there is always the wildcard that is Tennessee. They enter the meet as the 6th seed with a 1:34.63 from SECs. Last year, after Kentucky won the SEC team title, the Volunteers swam well at NCAAs. While their 200 medley placed just 8th (tie), they did go a season-best time at that meet. Only NC State, Cal, and Indiana could boast the same among NCAA racing teams.

But this year, they felt flat-out for the SEC Championships, so I’m not banking on them dropping time again. That doesn’t mean they’ll have a huge add, but I don’t think we can count on another drop.

UNC was just 4th at the ACC Championships in 1:35.58, but we can’t lose them behind the Virginia-NC State juggernaut at the top. They have swapped in one freshman leg to their relay, Greer Pattison, who replaced Grace Countie. Countie moved to the end of the relay on the freestyle leg to replace Heidi Lowe (who is still on their roster). Remember that UNC went into championship season with a little chaos last year, missing about half of their roster at ACCs because of COVID-19 protocols. They still managed to hold serve on this relay heading into NCAAs.

While we can’t really use last year’s times as too much of a guide, they’ve already been faster this year than they were last year when they tied for 8th at NCAAs. They’re only the 13th seed, but don’t count them out of a top 8 finish again.

That’s actually a photo of the NCSU 400 medley relay!

I wonder if swimmers like Emma Wheal, Alex Crisera, and Kira Crage will be on this relay for Stanford? If they are using swimmers like Regan and Taylor on the Free relays, it may be beneficial if they use some of these second tier sprinters.

The relay will most likely be the same as Pac 12 which was Regan Smith, Allie Raab, Emma Wheal, and Anya Goeders.

No way is Regan on back. Aside from this being the obvious relay to take her out of she’s not a sprinter. Shes likely to be around 24.0 in that so unless Regan would go 21.5 in fly it’s not worth the switch.

She does do a lot of dolphin kicks!

When did Grace Cooper medically retire?

She didn’t. I got her and Grace Ariola mixed up. Fixed.

I think times across the board will be slower than conference meets in relays. Clear water matters for these short relays.

Rent free in your head

So they are using all 8 lanes for relays at ncaas?