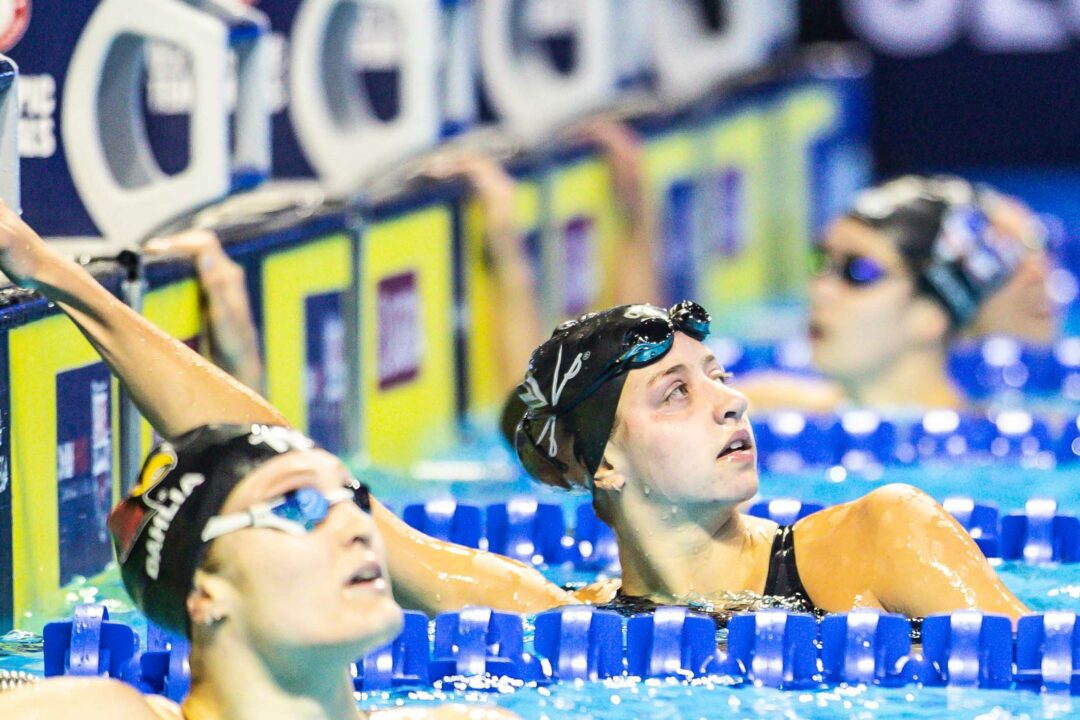 Kate Douglass anchored the UVA women's 200 medley relay that set a new NCAA, US Open, ACC, meet, and pool record with a time of 1:31.81. Archive photo via Jack Spitser/Spitser Photography

A day after UVA broke the NCAA and US Open record in the 200 free relay, the team of Gretchen Walsh, Alexis Wegner, Lexi Cuomo, and Kate Douglass swam the fastest women’s 200 medley relay of all time with a 1:31.81, over a second faster than the previous US Open record of 1:32.93 that was set by UVA last year at ACCs. Their time from this meet was a school, meet, conference, NCAA, American, and US Open record.

Another record was set in the same race when Gretchen Walsh swam a 22.82 backstroke leadoff split to become the first woman under 23 seconds in the 50 back. She broke her own American record of 23.04 set just a few weeks ago, as well Maggie MacNeil’s NCAA and US Open record of 23.02. Walsh was the X factor in this relay, throwing down a split that was almost a second faster than Caroline Gmelich’s 23.70 from their old record.

Virginia has been 1.3 seconds better than any other school in this relay – a huge margin in a 200. They broke the pool record set by Stanford at the 2016 NCAA Championships by three seconds. NC State swam the 5th-best 200 medley relay ever, and still lost by two seconds.

Alexis Wegner continued UVA’s lead in the relay when she swam a 25.77 breaststroke split, which makes her the fourth-fastest performer of all time in a 50 breast relay leg, only behind Hanna Bach’s 25.51, Jorie Caneta’s 25.54, and Lily King’s 25.36. Lexi Cuomo swam a 22.68 fly split, and Kate Douglass brought things home in a 20.54 freestyle leg.

The rest of the schools did not disappoint either. NC State’s Katharine Berkhoff (23.10), Sophie Hansson (26.13), Abby Arens (23.00), and Kylee Alons (21.02) finished in second with a time of 1:33.25, the fifth-fastest performance ever. Most notably, Berkhoff’s backstroke split makes her the third-fastest woman in the 50 back behind Walsh and MacNeil.

You can watch the relay here, courtesy of UVA Swimming’s YouTube channel.

Photo must be an old one. Kelsey Dalia has been long gone.

Out of the ACC sure, but she still raced at last summer’s Olympic Trials, as did Kate 😉

All that with Gretchen and Kate circle swimming.

Crazy fast swim by Gretchen Walsh! Can she be competitive with smith, masse,and mckowen in the 100 back 🤔🤔🤔

Can we wait to see her break a minute in long course, or at least swim a tapered 100 yard back before we start throwing that out there?

Lol what are they, 7? If not they say that shit out of your earshot. No need to clutch your pearls, Terry.