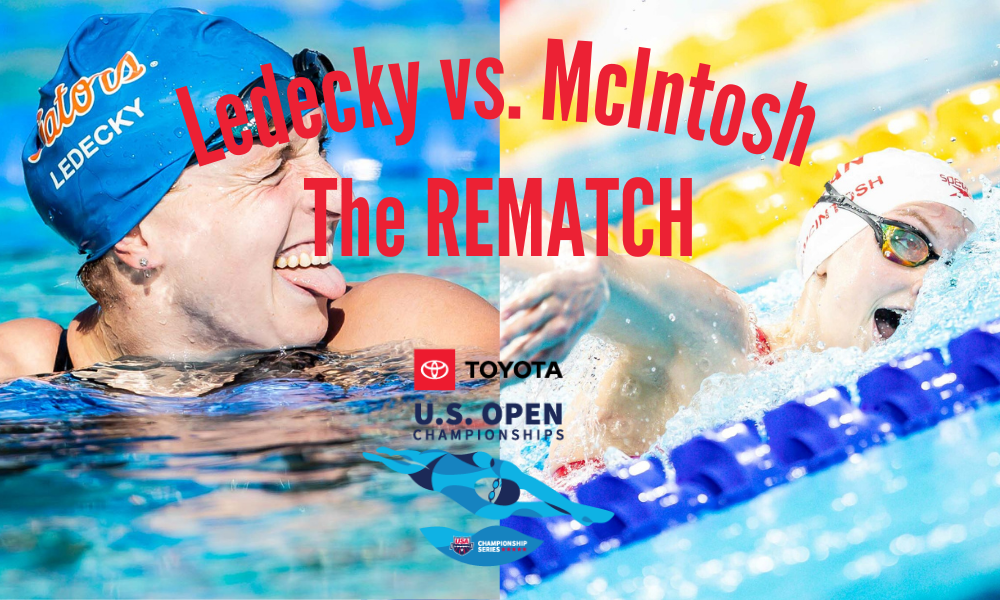 Among the highlights of the 2022 US Open Swimming Championships is a scheduled 400 free rematch between Summer McIntosh and Katie Ledecky. Archive photo via Jack Spitser/Spitser Photography

A rematch of a big World Cup battle and the absence of America’s biggest sprint names highlight the release of the 2022 U.S. Open Psych Sheets this weekend.

After a big short course battle in the 400 free at the World Cup in Toronto, which McIntosh won in a new World Junior Record time, the two will race again in Greensboro this coming weekend.

Ledecky hasn’t provided any teases of ‘off-events’ for fans to hem-and-haw over for the next few days, and will stick to her traditional lineup. McIntosh, meanwhile, has made some interesting event choices, including a 200 back and 200 breast that she doesn’t usually race. That means no 200 IM, 200 free, or 200 fly: all events where she is the long course World Junior Record holder.

Both swimmers now train in Florida: Ledecky as a post-grad at the University of Florida, and McIntosh with the club team Sarasota Sharks.

The meet will have a lot of big names, both American and international, in attendance. That includes the first long course taste of Regan Smith since turning pro and moving to train with Bob Bowman at Arizona State. She has raced short course at an Arizona State dual meet, but that is her only official result since last summer’s World Championships.

Her Arizona State teammate Simone Manuel, the newest addition to a bulging pro group in Tempe, is not entered in this meet. Manuel was the top American female sprinter for a quad, and an Olympic and World Championship gold medalist, before overtraining syndrome interrupted her Tokyo run. She still won the 50 free at the Tokyo 2020 Olympic Trials before taking an extended break from the pool.

With the US women still wanting for top-tier sprinters, Manuel is still very-much relevant in her comeback to training, though racing performances have been limited so far.

Another famous teammate on a break from the pool will also be absence: Team USA captain Caeleb Dressel, who left last summer’s World Championships early and hasn’t raced since. Dressel said in September that he hadn’t swum since pulling out of Budapest, and in early November he was spotted in a medical shoe.

But there will still be plenty of star-power and storylines, both domestic and international, in competition. That includes a number of international athletes competing in the NCAA system, who are using this meet as a long course racing opportunity to satisfy their international coaches, who aren’t necessarily concerned with yards competition. We’ll break down the best storylines later this week, but here are some of the highlight entries.

Observation: Swimmers don’t appear to be as over-entered as we’ve historically seen at these US Open meets. Perhaps a shift in culture is happening?

“Observation: Swimmers don’t appear to be as over-entered as we’ve historically seen at these US Open meets. Perhaps a shift in culture is happening?“
Was that Phelps and Lochte who started that?

I can’t say for sure, because in the early years of them, I wasn’t *this deep* in the sport. Maybe someone else remembers.

I know Gregg Troy was infamous for it among all of his swimmers.

Does anyone know what the $ symbol and asterisk is on swimmers?

I think the meet organizers recognize non U.S. citizens by one of these.

Idk because Summer Mcintosh is listed as a normal swimmer

Wonder if she’s missing an asterisk because she trains with a US club and/or that club didn’t mark her as international….

I wouldn’t take it as law. Asterisk is definitely for international swimmers.

Guilherme Costa is also not marked at all.

Asterisk before the name is international swimmers (not positive if they do it by real citizenship or sporting citizenship).

I thought $/# usually meant there was an “issue” with the entry time–e.g. the seed time doesn’t exactly match a time in the SWIMS database or something.

Just fyi…for domestic meets, the asterix is not always firmly attached if international swimmers are competing for US clubs. It used to be much more strongly adhered to, but in the past number of years, it has kind of become less of a thing. And it is supposed to be by real citizenship. There’s a box on the USA-S registration form where you have to check if you are foreign and then list your NGB if you checked it. Sometimes the box is missed, so probably what happens for the asterix to not show up.

McIntosh (and Titmus) are the best things that could have happened for ledecky.

I wish I could upvote this more than once!

Will you still think that if she gets beaten in the 400 in Paris?

Has there ever been a swimmer who has competed longer and more frequently (and won) against Hall of Fame-calibre int’l swimmers in the course of her career than Ledecky? She needs Titmus and McIntosh? For what? To prove what, exactly?

Nah man. Distance womens swimming hasnt been the most competitive the last 10 years. Ledecky has basically competed against the clock

Where is this energy for mens breaststroke?

If she goes a best time? Then yes

It’s certainly the best thing for the fans!

Maybe come Trials in June but I wouldn’t think so in December with presumably her main focus on SC Worlds,

Excited to see McIntosh in the 200 Back. Her backstroke in the 4IM has looked really good. While I don’t think it’s an event she’ll target for Paris (direct conflict with 200 Fly), it will surely only help her 400 IM.

Mattea Sokolow of TSM is one I’m watching out for this US Open. She’s been dropping a significant amount of time in her races lately, took 2nd at PSS in Mission Viejo in the 1500 last May going 16:59.