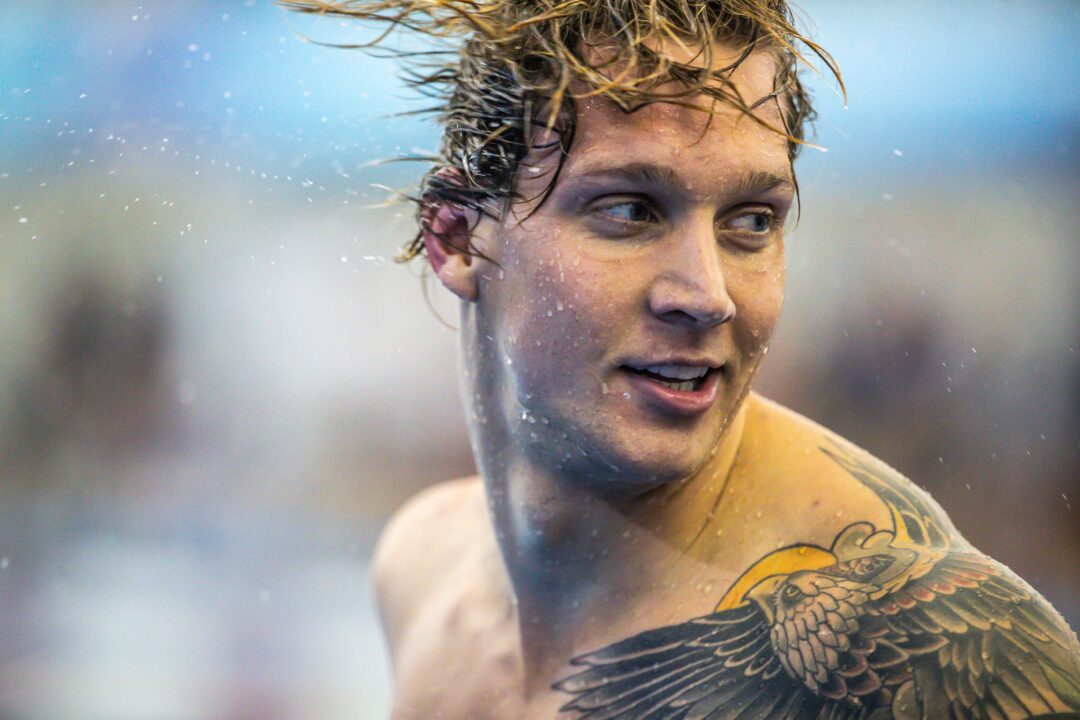 Appearing at a promotional event at an NFL game on Sunday, superstar swimmer Caeleb Dressel was wearing a medical shoe and using crutches. Archive photo via Jack Spitser/Spitser Photography

Dressel was at the NFL football game between the New England Patriots and Indianapolis Colts on Sunday, doing promotional work for the shoe and apparel company NOBULL, one of Dressel’s sponsors.

Posts by the brand and others in attendance show Dressel in the medical shoe and occasionally on crutches as well.

Dressel’s representatives did not respond to a request for more information about the injury.

The fact that he is wearing just the shoe, and not a full boot, indicates an injury in the foot or toes. While these shoes are often referred to as “post surgical shoes,” they do not necessarily mean that the wearer had surgery. The shoes are also used for other injuries and medical conditions, leaving some ambiguity as to the nature of the injury.

The 26-year old Dressel withdrew from June’s World Championship meet after two events due “medical reasons,” but did not elaborate on those reasons. Other than a few advertisements, the world’s top male swimmer has been mostly-quiet since. His only specific public comment since departing the meet came via an Instagram post in September where he said he hadn’t swum in months but that he was planning to come back to the water eventually.

Dressel is the owner of 7 Olympic medals, all gold, along with 20 World Championships in his career. Prior to his break from swimming, he was training as a post-grad at the University of Florida under head coach Anthony Nesty and associate coach Steve Jungbluth. Jungbluth, however, is no longer a coach at Florida.

Can we get an article on Caeleb’s new SwimCloud profile picture?

CD made enough that he doesn’t need to work for a while….if he does retire there will be a day where he is making a fraction of what he could now, and greatly regret not taking a run at ’24.

A lot of trolls here

Sorry, can’t find anything about Kristof Milak in this article 😉

A representative for Dressel confirmed that the boot was related to a minor toe injury that Dressel had dealt with in the past. The injury was described as “nothing major” and “just a pre-existing bother that he needed to get fixed.”

I wonder if he had something lingering from his motorcycle accident in 2018? Could just be a good time to fix nagging injuries.

He went bowling with Ryan Lochte.

I thought he wasn’t swimming for 6 months?

If I recall, that came from Rowdy saying what he thinks, not anybody quoting Caeleb directly.

Yup, that was Rowdy’s prediction