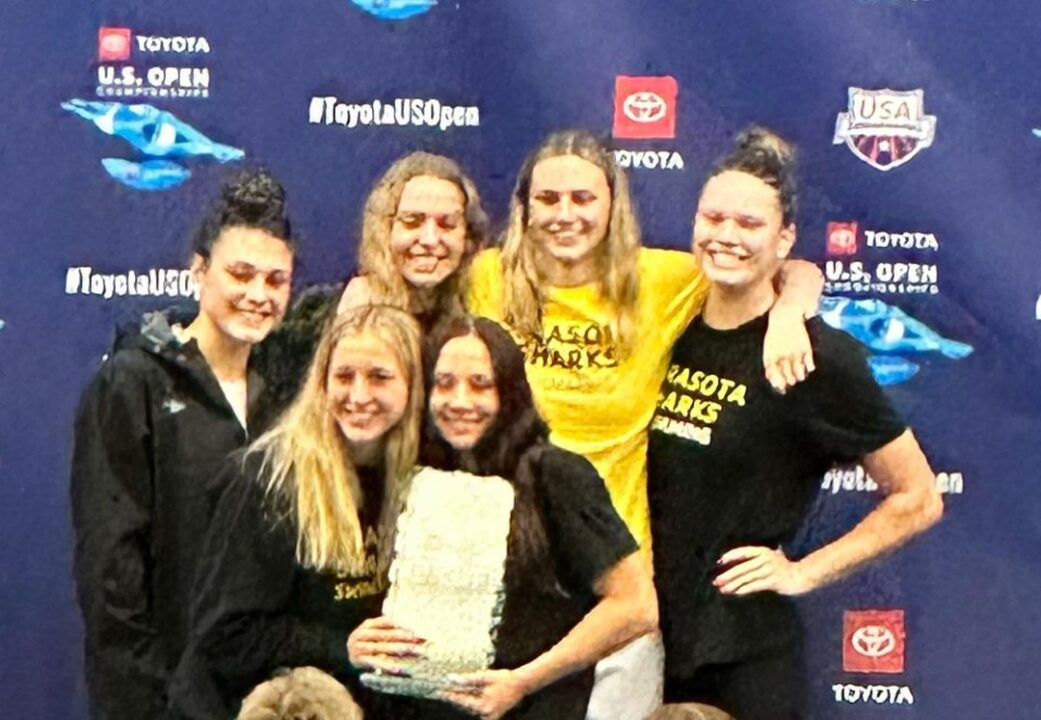 The Sarasota Sharks (above) won the women's title at the 2022 U.S. Open Championships in the club-or-federation division. Current photo via Sarasota Sharks

Awards were given to the top men’s teams, top women’s teams, and top combined-gender teams in two different categories: one for clubs or federations, and one for universities.

The Sarasota Sharks from Sarasota, Florida won the women’s club/federation title, beating out a visiting team from Ireland. Among the highlights for Sarasota was Michaela Mattes, who was 2nd in the 800 free behind only World Record holder Katie Ledecky, and Canadian Summer McIntosh, who won the 400 IM and had several runner-up finishes as well.

That Irish team included Mona McSharry, who represented her country and not her college team Tennessee at the meet. That resulted in some fun races where she swam on the Irish relay against her Tennessee teammates.

Tennessee, even without McSharry, still managed to win the women’s collegiate division.

On the men’s teams, international squads led the way in the club or federation standings. Brazil, led by 400 free and 800 free champion Guilherme Costa, won the title, followed closely by a high performance squad from New South Wales in Australia. While these team awards are not heavily focused on at US National Championship meets, in Brazil, team awards are paramount in their domestic championships, so the honor will carry some weight at home.

The top American team in the club or federation category was SwimMAC Carolina. While they didn’t have any event winners, they did send a deep team with lots of individual scorers that added up to a 3rd-place team finish. The absence of many of the top American pros helped youth clubs rise to the top of the standings.

The University of Florida dominated the men’s university division scoring. They sent a big roster, especially of internationally-minded swimmers, to get some mid-season long course racing in. That includes names like Olympians Alfonso and Alberto Mestre (Venezuela), Jake Mitchell (USA), and Josh Liendo (Canada).

Alfonso Mestre, a senior at the University of Florida, and Regan Smith, a pro training out of Arizona State, won the men’s and women’s high point awards, respectively.