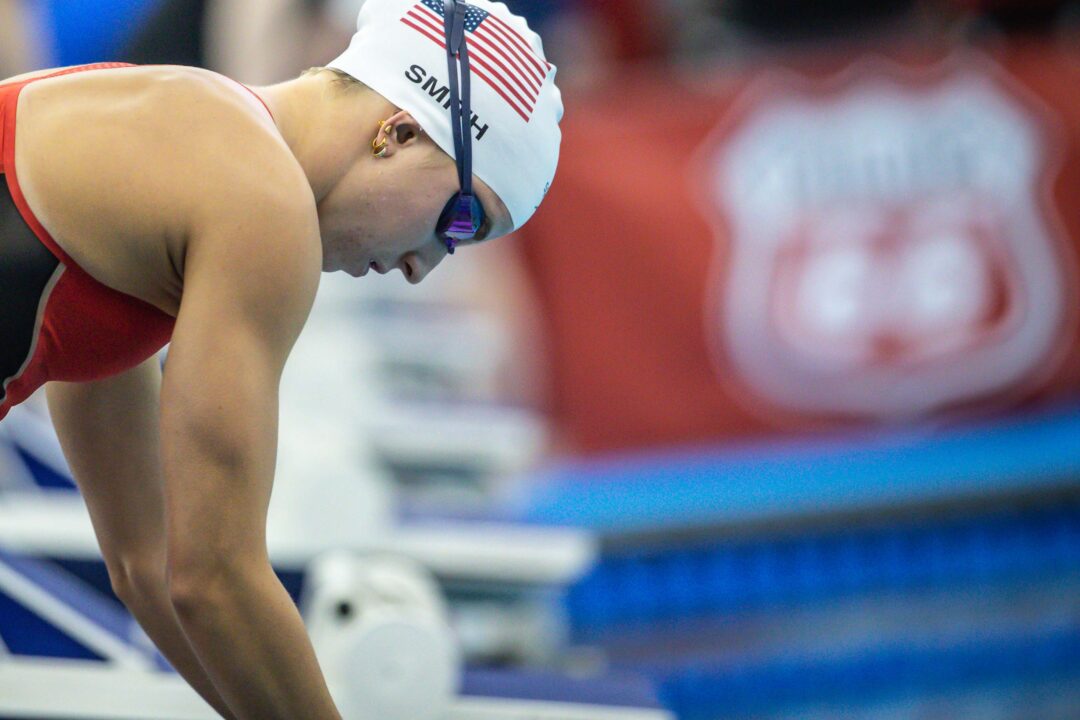 Day 3 finals of the 2022 U.S. World Championship Trials is shaping up to be a session primed for new records.

The women’s 400 IM is led by 16-year-old Leah Hayes who posted a 4:39.65 in the morning session, taking about 3 seconds off of her previous lifetime best. 2020 Tokyo silver medalist Emma Weyant, as well as Tokyo 2020 bronze medalist Hali Flickinger, will also be in the final in Greensboro. Flickinger was seven seconds behind Hayes in the morning heats, though she has also already punched her ticket to Budapest by winning the 200 butterfly on Day 1. Expect this to be a close race this evening.

The men’s 400 IM is led by Olympic champion Chase Kalisz, though Carson Foster clearly shut it down in the final 50 meters of his prelims swim, demonstrating more control during the morning heats than he has shown in the past. This could be the year Foster makes his first senior international team for a LCM championships meet in an individual event–he placed 3rd in the 200 freestyle Wednesday, so he will be a part of the 4 x 200 freestyle relay in Budapest. Foster will have to contend with Olympic silver medalist Jay Litherland, who has the best final 100 of anyone in the field. Litherland chased Foster down in the final 100 at the 2021 U.S. Olympic Trials, and he will need that kind of endurance tonight in order to secure his place on the Budapest roster.

Caeleb Dressel blasted a smooth 50.01 in the 100 butterfly to take the #1 seed by over a second. Dressel could scare his own U.S. Open Record of 49.76. Trenton Julian, who is having a breakthrough meet in Greensboro, put up a 51.11 in the 100 fly prelims to claim the #2 seed. The men’s 100 fly field will also include 3rd seed Michael Andrew, who has the second-fastest lifetime best in the field, as well as Shaine Casas, Luca Urlando, and Maxime Rooney, among others.

On the men’s side, Hunter Armstrong demolished the 50 backstroke American and U.S. Open Records with a 24.01, making Armstrong the 2nd-fastest performer in history. Justin Ress followed that up with a 24.05, making him the 2nd-fastest American all-time and 4th-fastest man in history behind Armstrong and World Record holder Kliment Kolesnikov. Former American Record holder Ryan Murphy qualified 4th in 24.63, about 4/10ths off his best time. Shaine Casas qualified 3rd in 24.45. Between the four it’s hard to say who will come out on top: Murphy is the veteran, and Ress also has an impressive resume, while Armstrong and Casas are the up-and-comers. This session could see the first American and second-ever man in history under 23-seconds in the 50 backstroke.

More 2nd-, 5th-, and 6th- place finishers could be added to the World Championships roster tonight, so long as individuals such as Caeleb Dressel, Torri Huske, Claire Curzan, Luca Urlando, or Rhyan White can notch another win or 2nd-place finish. Furthermore, if Regan Smith and Shaine Casas win the 50 backstroke they will secure their spots on the roster as well as officially add their 200s of stroke to their Budapest lineup: Smith finished 2nd in the 200 fly while Casas finished 2nd in the 200 back. Finally, if Trenton Julian finishes 2nd in the 100 fly he will almost certainly swim both the 100 and 200 flys in Budapest.

World record tonight? Yes or no? Of so, who?

Congrats to Dare Rose for making a big-time final.
Coach Melvin must be proud.

Trenton Julian has been the swimmer of the meet on the mens side for me. Dude grinder hard to be here and now could be swimming 2 individuals and be a huge part of relays.

I know he made the Olympic squad last time around in the 100 Back, but The Magic Man continues to show huge improvement and is my swimmer of the meet so far. How far he has come in the last 4 years (especially last 2 with Dorenkott) is amazing. Also much praise to Mike Davidson with CCS for preparing him and giving him the tools that he needed to succeed at the next level.

More questionable judgment from Michael Andrew. He can break the AR in the 50 Breast, and he looks unlikely to be top 2 in the 100 Fly. The 50 Back, like the 100 Back at OTs, is a pure distraction. Yes, he’s a world class sprint backstroker; but he’s never going to medal in those events without a quantum leap forward.

I figure the back is after the other 2 so why not jump in and race?

I’ll agree about the distraction of the 50 back, although it will be the 3rd of the night so won’t affect his other swims.

I will differ on the express opinion of “unlikely to be top 2 in the 100 fly”. He is 3rd and was not at his PB time. Certainly, still a factor and has been faster in the past. Winning? No. Top 2? Certainly possible.

You were right. I didn’t think he had that much left to drop in the fly. I was also impressed with both of his breaststroke finishes today. He lengthened the penultimate strokes to hit better (though I think he lengthened a tad too much in the final; was set to beat Fink by more).

Don’t count out Katie Grimes in the 400 IM! She went a 4:00 in SCY last December, and could possibly drop a 4:35 to put pressure on Flickinger and Weyant (if she is on).

Grimes is the most interesting swim of the night, IMO. She has to decide what events to prioritize long term and tonight’s outcome could play a role. Not nearly enough attention was paid to her poor result in the 800. Age 16 is not young for a distance freestyler. Those historically are prime years. Grimes should not be losing 5 seconds from 15 to 16. I realize she fared well in open water. Maybe her preparation for this meet was not ideal. But there is such longevity potential at 400 individual medley. She could be like Hosszu and be a factor until her early 30s. Nobody wants to swim that race, as evidenced by Walsh avoiding it here.

It HAS to be the best set of finals of the meet tonight: Casas + MA — what’s going on with both of their sets of choices.
Then, there is Berkoff vs. Smith separated by hundredths of a second!
How do you spell excitement?