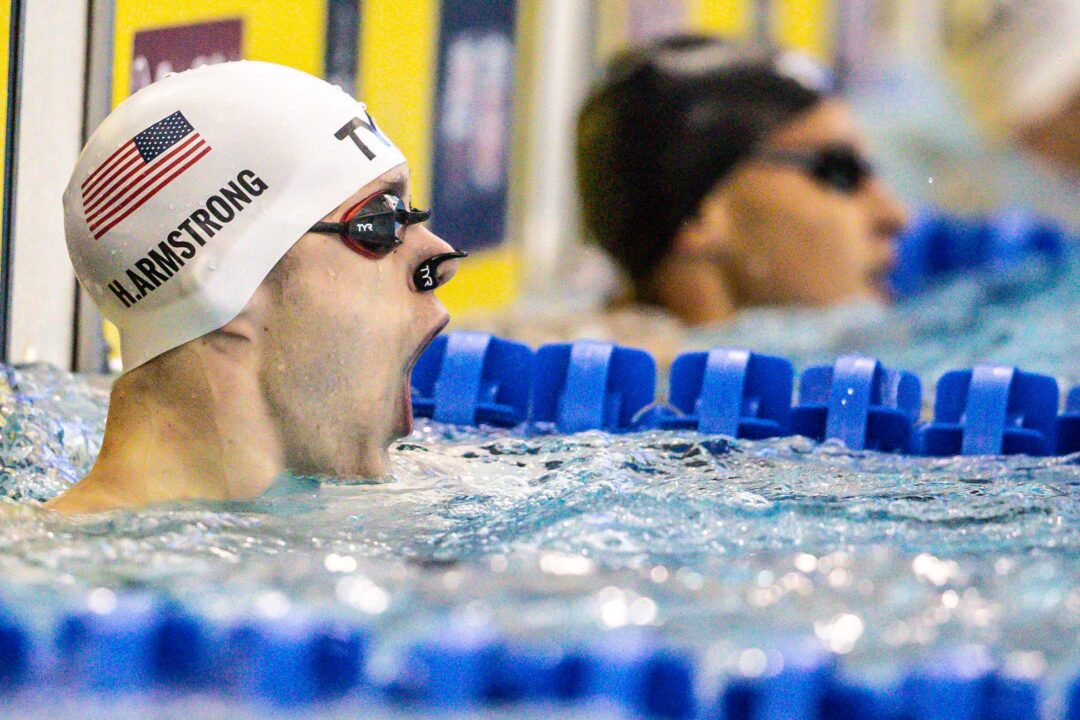 After setting a new World Record in the 50 back, Hunter Armstrong suddenly looks like the man to beat in the 100 back on Day 4. Current photo via Jack Spitser/Spitser Photography

With only seven events left, it’s crunch time for swimmers still hoping to head to Budapest in June. Olivia Smoliga, Lydia Jacoby, and Annie Lazor are all Tokyo Olympians still looking for their first Worlds qualification.

Michael Andrew, Katharine Berkoff, and Hunter Armstrong will look to back up their record-setting performances in the 50s in their respective 100s of stroke.

After a rest day, Katie Ledecky will be back in the water for the 400 free. Leah Smith, Hali Flickinger, Emma Weyant, and Bella Sims are also hoping to add to their Budapest lineup.

In the men’s 400 behind Kieran Smith, we’ve got as sticky a qualification situation as we did last year. For the full breakdown, read our preview of the event. The question is, after qualifying for Worlds in the 4×200 free relay and the 400 IM, can Carson Foster hit the 3:48.15 FINA ‘A’ cut?

Looking for a breaststroke sweep, Lilly King sets up for a finals showdown with Jacoby and Lazor in the 100 breast. Don’t count out Alex Walsh or NCAA champion Kaitlyn Dobler either.

In addition to his new 26.52 American Record in the 50 breast, Andrew holds the 100 breast American Record of 58.14. He and 200 breast champ Nic Fink are the favorites here, as they are the fifth and eighth fastest performers in the world this season.

Berkoff swam an AR of 27.12 in the 50 back to beat Regan Smith, Olivia Smoliga, and Rhyan White. She’ll now face them and the usual star-studded field in the 100 back. As always, it looks to be an incredibly close race. To make it back for finals, they’ll all have to be at their best.

After his World Record of 23.71 in the 50, it’s Hunter Armstrong who looks like the man to beat in the 100 back, not Ryan Murphy. Indeed, after finishing fourth in the 50 behind Armstrong, Justin Ress and Shaine Casas, Murphy’s path to a Worlds qualification here just got a lot more difficult. Throw the 15-16 NAG record-holder Daniel Diehl into the mix, plus a pack of NCAA stars, and we’ve got a battle for lanes in the final. Keep an eye on Luca Urlando, who popped a 43.35 to break Murphy’s American Record in the 100-yard back last month.

One would guess Armstrong can go faster but Kolesnikov could only manage 52.0 with 23.80 and he is a formidable 100 swimmer.

I think Carson will hit the 3:48 rather easily, but then he must choose between that and 4IM since they are in the same session at Budapest. Right?

Really looking forward to the women’s 400 free and both 100 backs. Foster should have no trouble getting the QT in the 400.