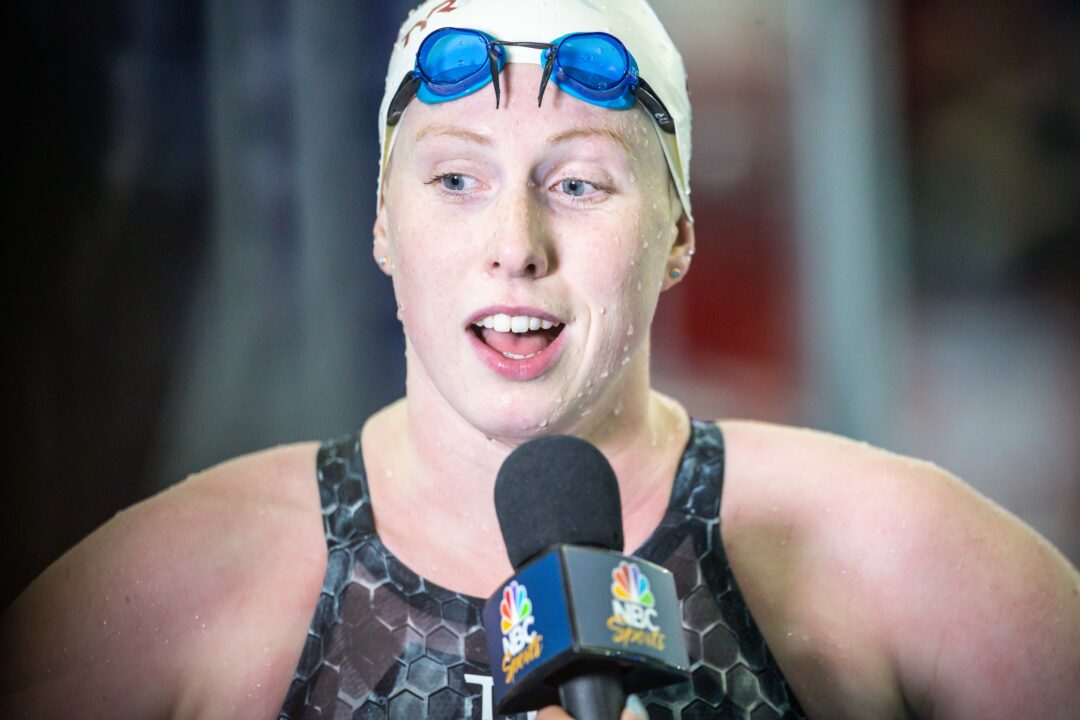 Readers believe the women's 100 back and 100 breast would be the most likely events the U.S. could sweep at Worlds, but maybe now it's the 200 breast? Current photo via Jack Spitser/Spitser Photography

Our most recent poll asked SwimSwam readers which event the United States would have the best chance of occupying all three podium places at the 2022 World Championships if they could bring three swimmers to Budapest:

Question: If countries could bring 3 swimmers per event, which race would the U.S. have the best chance of sweeping the Worlds podium in 2022?

The general goal of this poll was to establish which event at the currently ongoing U.S. World Championship Trials would have a third-place finisher who could realistically vie for a medal at the 2022 World Championships.

In other words, which race was the most competitive, three swimmers deep, where whichever swimmer(s) didn’t finish in the top-two were undoubtedly world class, and if they swam for any other country, they’d be in the medal conversation in two months time.

The question then evolved into which race the U.S. would have the best chance of sweeping in Budapest if they could bring three swimmers, which added in a layer of American strength relative to the rest of the world.

In a tight vote, the women’s 100 backstroke came out on top at 23 percent.

The event is a logical in some respects, given that the U.S. had five of the top 10 swimmers in the world in 2021. The third-place finisher at the Olympic Trials, Olivia Smoliga, swam a time in-season (58.31) that would’ve won the 2019 World Championship title.

However, looking at the global landscape, it would be difficult to imagine an American sweep at the World Championships, given that both Australian Kaylee McKeown and Canadian Kylie Masse have both broken 58 seconds multiple times, something only Regan Smith has done among Americans.

Second went to the 100 breast, where the U.S. has the world record holder and defending world champion in Lilly King, the reigning Olympic champion in Lydia Jacoby, and Annie Lazor, who ranked fourth in the world in 2021 behind only King, Tatjana Schoenmaker and Jacoby.

The women’s 200 breast, which wasn’t even included in the poll, can now enter this conversation, as King, Lazor and Kate Douglass all hit 2:21s at World Trials on Wednesday night, with Douglass earning an upset berth at Worlds over Lazor.

Additionally, Schoenmaker won’t compete in Budapest this year, which would make a potential U.S. sweep in both races a very likely scenario.

The women’s 200 IM was third in the voting, with the event a much more wide-open one on the world stage recently as Katinka Hosszu is no longer the dominant force she was in the mid-2010s. Douglass and Alex Walsh are the clear top-two in the U.S., and Torri Huske and Melanie Margalis are among the names who could fill that third spot. That race will play out on Saturday in Greensboro.

The men’s 100 back was next, which is warranted given the American depth highlighted by Ryan Murphy, Hunter Armstrong and Shaine Casas.

Both 100 back events will take place today at Trials, so we’ll see how things play out.

The women’s 100 fly is a deep event in the U.S. and has the added benefit of numerous big names sitting out of the event at Worlds this year, most notably current Olympic and world champion Maggie MacNeil, Tokyo bronze medalist Emma McKeon and world record holder Sarah Sjostrom.

The 200 back still has McKeown and Masse, though three American swimmers hit 2:05 in that final in Greensboro, while the men’s 200 IM didn’t get much love but has a strong talent pool with Chase Kalisz, Michael Andrew, Carson Foster and Casas.

Update: After this article was originally written, it’s clear the answer is the men’s and women’s 50 backstroke.

Below, vote in our new A3 Performance Poll, which asks: Which of these world records will be on the books the longest:

Next world championships will be much devalued with so many big names absent.

I don’t know: Can you name off the top of your head which World Championship meets Michael Phelps missed? I think there is enough depth in the sport that a WC title is still legit, no matter who is missing from the meet.

A bit like the mens 200fc, GB has their strength in that event

This question is so dependent on context because the US women’s 100 back feels like the deepest given how many 58s there are, but its also one of the deepest events in the world. Plus Masse and Mckeown are so consistent that it makes it hard to see one of them not making the podium. Alternatively, the women’s 100 breast has a huge drop off after King, Jacoby, and Lazor, but there’s a lot less international competition for the podium if the three of them are at their bests.

I’m so confused how 23% voted women’s 100 back. Like what the?
McKeown does 58 second swims consistently in season.

It reminds me of the predictions of all the Dressel 200 free times, way above his better times, what?

I didnt think the poll was asking which was deepest, rather which they could sweep with lots of OLY champs not going.

The real answer now is the men’s 50 back

Beat me to it

Men 100 back being overlooked like woah. Context is key here. These upcoming World Championships will not include the Russian duo.

100 back seems an odd choice when the gold and silver medallists from Tokyo will both be there and neither are American.

100 breast seems like the most clear choice considering Schoenmaker won’t be there which actually gives USA the top 3 from last year.

Yes, a very strange result. No way both McKeown and Masse are getting beaten by 3 US swimmers.

Yeah I think people forgot about McKeown and Masse. Don’t know how, I mean really???
I thought women’s 100 fly was possible maybe due to three big names missing,