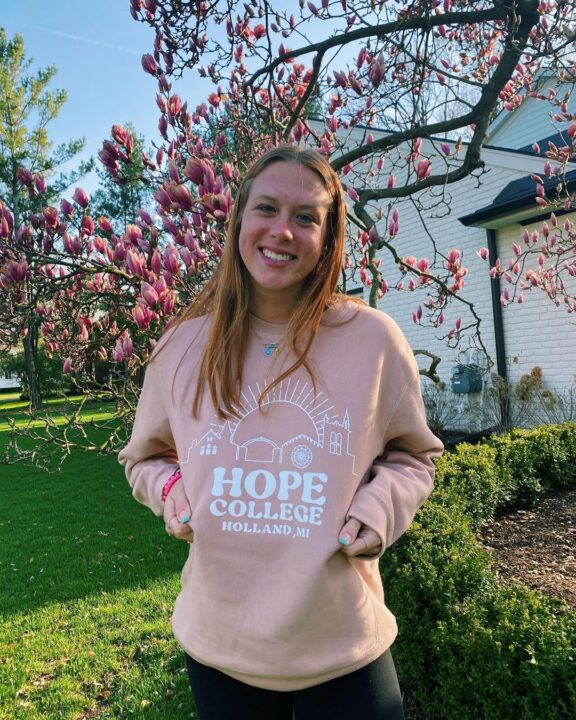 After a semester of swimming at Michigan, Greta Gidley will continue her college career across the state at Hope College next season. Archive photo via Greta Gidley

Former University of Michigan swimmer Greta Gidley will transfer to Division III Hope College next fall. She swam one semester at Michigan, and hasn’t raced since December’s Minnesota Invitational.

Gidley is a Michigan native, attending Mercy Catholic High School in Farmington Hills near Detroit – only about 30 minutes from the Michigan campus. This move will take her a bit further from home to Holland, Michigan, on the opposite side of the state.

The Hope College women placed 19th at last year’s NCAA Division III National Championship meet with a roster of seven swimmers and divers. That was the team’s best finish since the 2008-2009 season when they ranked 18th.

Among her freshman season times at Michigan, though, only her 100 breaststroke would have qualified for a scoring final at the national championship meet.

Only one leg of that relay, breaststroke Emma Schaefer, is out of eligibility.

Gidley is one of a number of Michigan swimmers who have announced transfers or entered the NCAA transfer portal since the start of last season. From the women’s team, that includes Olympic gold medalist Maggie MacNeil, who will use her 5th year of eligibility at Cal next season, and All-American Sophie Housey, who has not yet announced where she will swim next season.

Sometimes, it’s not so easy to find the right fit. Since MSU unceremoniously dumped their swim & dive team, there are not many competitive options in the whole state of Michigan. Best wishes to Greta at Hope! So close to Lake Michigan, I’m jealous!

Congratulations! you will do great!

Well this is surprising