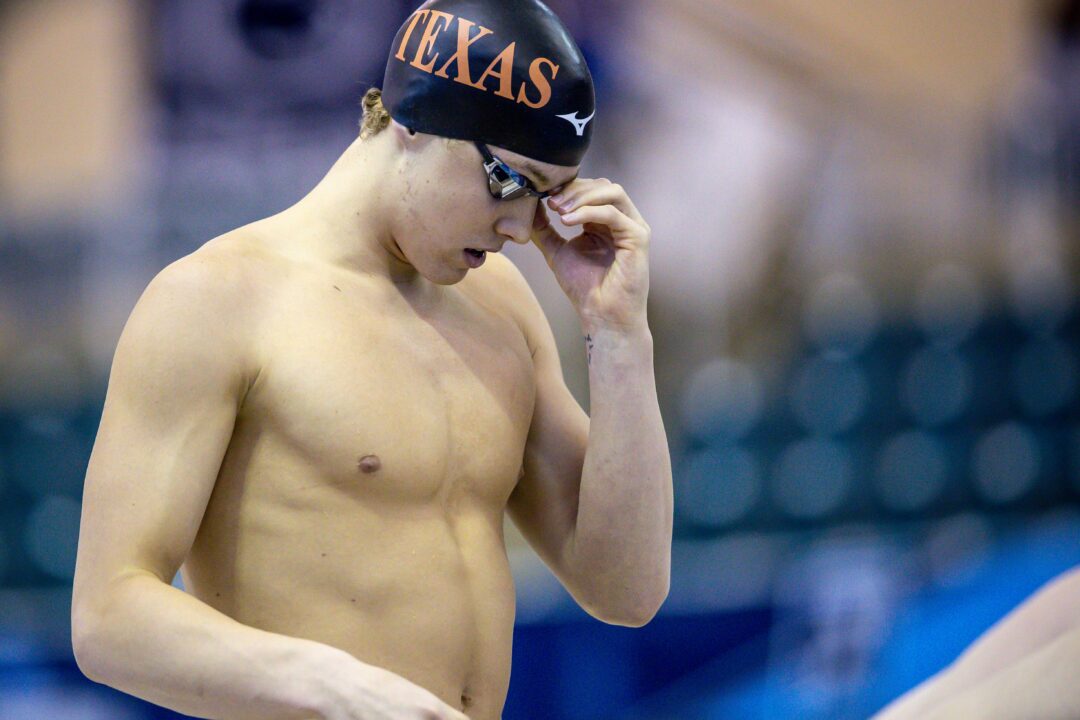 With Jake Mitchell out of the meet, Carson Foster, who confirmed he would swim the event, could be the second 'A' cut that Team USA is looking for. Archive photo via Jack Spitser/Spitser Photography

Let’s flash back to a year ago. The men’s 400 free final at the 2021 Olympic trials had concluded, and Kieran Smith and Jake Mitchell took the top two spots. However, only Smith had gotten under the Olympic ‘A’ qualifying time of 3:46.78. Mitchell, who finished second with a 3:48.17, was short of that time and could not qualify for the Olympics.

Since no other swimmer had hit the ‘A’ time yet at trials, the second spot on the Olympic team in the 400 free would have gone to Zane Grothe. Although he only finished eleventh with a time of 3:50.80, at that point he was the highest placing finisher who had hit the ‘A’ time in the qualifying window of March 1, 2019 to June 27, 2021. However, if any of the swimmers that placed higher than him in trials hit the ‘A’ cut before June 27th, Grothe would have been bumped out.

A day after the 400 free final, USA Swimming decided to give the swimmers who beat Grothe (excluding Smith) an opportunity to time trial the race. Then, in one of the greatest Olympic trials swims in history, Mitchell dropped over two seconds from his personal best to hit the ‘A’ time with a 3:45.86- all while being in a pool by himself. Because he was the highest placing finisher in the original 400 free race (besides Smith), he was the top priority and earned himself on the Olympic team.

Even though this year’s FINA ‘A’ cut of 3:48.15 is almost two seconds slower than last year’s Olympic qualifying time, Smith, Mitchell, and Florida swimmer Trey Freeman are the only three who have been under that time since March 1, 2020, the start of the qualifying window for 2022 Worlds.

Especially with Mitchell being out of trials because he is recovering from mono, the 400 free is wide open, and a 2021 trials situation is very likely to happen again.

Ending the qualifying window to hit the FINA ‘A’ cut on April 25, the day before trials begins, kills any possibility of a time trial this year. This means that after the event is swum, the results are set in stone and there will be no second opportunity to hit the cut.

Okay, enough with the rulebook analysis, and back to the actual race itself.

The swimmer who we are the least worried about in this ‘A’ cut fiasco is Florida’s Kieran Smith. He dominated the 400 free at Olympic Trials last year and won by nearly four seconds, and then followed it up by winning the bronze medal at the Olympics with a best time of 3:43.94.

At NCAAs this year, Smith wasn’t at his best, placing fourth in the 500 free with a 4:08.68. That’s still a really good time, but off of his personal best of 4:06.32, which stands as the fastest in the event’s history. Smith didn’t defend his national title in the 200 free either, placing fifth with a 1:31.27 when he went 1:29.48 a year ago. But despite his recent mishaps in yards, he’s still light years ahead of his competitors in meters, so picking him to finish any place but first wouldn’t make any sense.

In normal circumstances, Jake Mitchell would have been our pick to get second. He’s an Olympic finalist, and placed eighth in Tokyo with a time of 3:45.38 that is well under the FINA ‘A’ cut. However, he recently told SwimSwam that he found out he had mono during NCAAs, leaving him out of the water for weeks. Because of this, he won’t be in Greensboro next week to compete.

So the question is: who’s gonna get second behind Smith now? Will we even send two people to Worlds in the 400 free?

Trey Freeman was sixth in the 400 free final at trials last year, swimming a time of 3:49.07. However, at Speedo Sectionals a month later, he was over two seconds faster and went a best time of 3:47.04. Because that time is faster than the ‘A’ cut, Freeman is guaranteed a spot on the worlds team as long as he: 1. finishes in the top eight and 2. no more than one person who finishes before him swims the ‘A’ cut at either trials or during the qualifying window.

In the 2021-22 season, Freeman is the only swimmer who has been under 3:50, swimming a time of 3:49.06 at the 2021 U.S. Open. He’s had significant improvements in his NCAA events this season, and trains with perhaps the best middle-distance group in the country at the University of Florida. Now, all he has to do is take that improvement into long course.

Our next pick as a contender might be a bit of a surprise. Although he didn’t swim the event at trials last year, Texas’s Carson Foster hit a best time of 3:48.35 at the 2021 Austin Speedo Sectionals, just 0.2 off the ‘A’ cut. His dad confirmed to SwimSwam earlier today that he would be entering the 400 free at this year’s trials, giving him another event to prove himself in after missing the Olympic team last year.

Given that he’s already world-class in the 400 IM, there’s no reason to believe that he has much more in store in the 400 free, which is an event that he has never swam seriously before. In addition, his 1:46.30 200 free from the Texas Time trial last week is very promising.

There are many other swimmers who have been very close to the ‘A’ cut, but haven’t gotten there just yet. A trio of 500 free finalists from NCAAs this year- NC State’s Ross Dant, Georgia’s Jake Magahey, and Arizona’s Brooks Fail, have all been less than half a second away from the time.

Dant had one of the most unlucky Olympic trials showcasings, placing third in both the 400 and 800 free to just miss out on Tokyo in two different events. He went a personal best of 3:48.30 in the 400 free, which is just 0.15 seconds off the ‘A’ cut. If he can drop a little more time and finish ahead of his competitors, Dant will be able to avenge his losses from last year and gain his first international competition berth.

As the fastest American finisher in the 500 free at NCAAs this year, Magahey comes into trials with a lot of momentum. He just missed out on an Olympic trials final last year when he was ninth in the semifinals with a time of 3:49.89, but swam a best time of 3:48.56 a month before the meet. He is the third-fastest ever in the 500 free with a personal best of 4:06.71, and has beaten Smith twice at NCAAs when he won last year and came in second this year. His experience racing (and winning) against many of the swimmers in this field will make trials familiar territory for him.

A staple of consistency, Fail has made the 500 free A-final at NCAAs three years in a row. He finished fifth at 2021 trials with a time of 3:48.47, but doesn’t have much long course racing under his belt considering that his last swim in the event before trials was at 2019 U.S. Nationals when he went 3:50.72. He dropped 2 seconds from 2019 to 2021 in the 400 free, and despite never being an NCAA or national champion, Fail’s constant ability to stay at the top makes him one to look out for.

Best Of The Rest

Foster’s Longhorn teammates, Luke Hobson and Coby Carozza, are also ones to watch.

Hobson was 19th at trials last year and swam a time of 3:52.79, far outside of the top competition. However, his best time in the 500 free dropped from a 4:16.56 to a 4:08.42 in his freshman year at Texas, which culminated in him breaking Michael Phelps’s 17-18 National Age Group record (and then re-breaking his own record twice) and finishing third at NCAAs. Hence why it wouldn’t be surprising to see him improve big time in long course and put himself right up there with the best.

After clocking a 3:50.02 at trials last year to take tenth, Carozza could potentially sneak his way into the finals this year. He recently hit a 3:51.10 at a Texas time trial, just a little bit off his best time- but a very impressive swim considering that it was done in the midst of training.

That leaves Christopher Wieser, Andrea D’Arrigo, and Andrew Abruzzo, who finished fourth, seventh, and eight at last year’s trials with times of 3:48.42, 3:50.87, and 3:51.45 respectively. Wieser and D’Arrigo have not swum since then, while Abruzzo had a disappointing college season with Georgia this year when he failed to make NCAAs.

And how about Zane Grothe, the man who represented the USA in this event at the 2017 and 2019 worlds? Although his best time is a 3:44.43, he hasn’t been faster than 4:01.40 this season, and the odds of him going over ten seconds faster in a weeks’ time aren’t looking so great.

Dark Horse – Michael Cotter, TAC Titans: One of the top boys recruits in the Class of 2022, the future NC State swimmer has made huge improvements in his long course swimming recently. He recently set a personal best of 3:53.70 at the San Antonio Pro Series, two seconds faster than the 3:55.40 he went at trials last year. With his stock quickly rising, Cotter could be the fastest junior finisher in the event and maybe make the final if he hits his taper well.

Hobson all the way. Hard not to justify it when he’s the second fastest American at this NCAA with absurd 8 second drop in the 5free. Plus it looks like his actual swimming (rather than turns) is what he’s so good at which translates better to LCM. Hard to compare last years time for someone who has improved so dramatically.

Is Carson Foster dad his agent?

I still think it’s crazy that the US went from no Olympic A cuts before trials (minus Grothe) to getting two people in the final at the Olympics (plus a medal). Shows how incredible the coaches that the US chooses for international teams are (Nesty specifically).

Are the 400 IM and 400 free finals in the same session at worlds? Always thought it was a shame that the events typically conflict at the Olympics.

They aren’t typically, but it looks like they will be this year.

Whoops, did not realize that this question was answered earlier in the thread!

One of your top 8 isn’t going to Trials. I will let his coach or the swimmer let it be known.

What was charlie clark in december at us open?