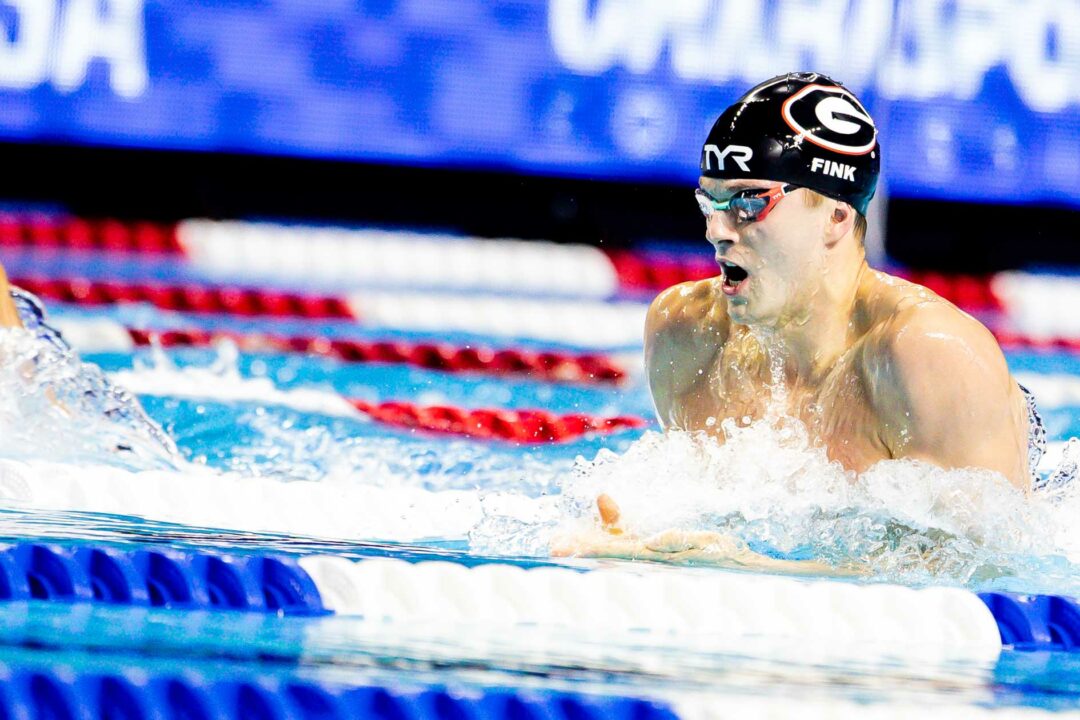 The ever-consistent Nic Fink is the odds-on favorite in the 200 breast after several names from last year's Olympic Trials won't be competing in Greensboro. Archive photo via Jack Spitser/Spitser Photography

The landscape of the men’s 200 breaststroke in the United States has gone relatively unchanged for the better part of the last decade.

After a pair of relative unknowns, Scott Weltz and Clark Burckle, broke through to make the 2012 Olympic team in the event, the race has been dominated domestically by the likes of Kevin Cordes, Josh Prenot, and most recently, Nic Fink.

Andrew Wilson has also been an international fixture of late, representing the U.S. in the 200 breast at the last edition of the Olympics, World Championships and Pan Pacific Championships.

In fact, some combination of the aforementioned four has been the American representatives on the world stage dating back to 2014. And while that will likely not be the case again this year, it does appear as though 2022 will be another year where the veterans reign supreme.

Wilson has moved on from the sport, as has Prenot, at least from the elite ranks for the time being. Cordes hasn’t raced at all this long course season.

That gave the indication that the door was wide open for Matt Fallon, who had a breakout swim in the Olympic Trials semi-finals last year (2:08.91 for a 17-18 NAG), to make his first major international team at trials, especially after a very strong freshman season in the NCAA.

However, we recently learned that Fallon would not be competing in Greensboro due to final exams at Penn, further opening this race up to a myriad of contenders.

Fallon’s absence is an unfortunate situation given his progress in SCY and what that could mean for his long course times, but we’ll have to wait a little bit longer to see how he progresses in the big pool.

But for now, this race appears to belong to Nic Fink.

Fink, who will turn 29 shortly after the World Championships conclude, has consistently been among the top male breaststrokers in the country over the last decade, and has really been coming into his own of late.

After roaring to a personal best time of 2:07.55 en route to the win at the Olympic Trials, Fink was sub-2:08 again in Tokyo to finish fifth in the final.

The University of Georgia grad took his game to the next level over the winter, setting new American Records in the SCM 50 and 100 breast while winning the Short Course World Championship title in the 50 and 200.

Fink is one of three men in the field who have broken the 2:08-barrier, but the only one to do so since 2019. He’s got the right mix of speed and endurance to get the job done, making him an easy swimmer to pencil in as the number one.

Along with Fink, Cordes and Will Licon are the other two men expected to be in the field to have ventured into 2:07 territory.

Cordes, 28, has done so four times, but not since 2017. The 2015 World Championship silver medalist in the event, Cordes has been struggling to find his mid-2010s form over the last number of years – he’s only been sub-2:10 once, in the Olympic Trials semis, since the beginning of 2019. That makes him a long shot to make the Worlds team.

Additionally, we’ve only seen Cordes in action in action this season in the short course pool, racing in the International Swimming League (ISL), so his status is somewhat up in the air.

Licon, on the other hand, has been snake-bitten at selection meets in the past and may finally break through and qualify for his first World Championship team at the age of 27.

He’s been sub-2:09 on six occasions, and it may finally be his time to exorcise his demons.

Another established name to watch for is Chase Kalisz, the reigning Olympic champion in the 400 IM who is rumored to be dropping that event from his schedule in 2022.

The 200 breast is a race Kalisz has frequently taken on in-season, owning a best of 2:09.90 from the 2018 Pro Swim meet in Indianapolis, but usually scratches out when selection is at stake. He’s already been 2:12.47 earlier this month in San Antonio, and should challenge to be sub-2:10 again if he races this.

Other veteran swimmers to keep an eye on include University of Michigan alums Charlie Swanson and Tommy Cope, plus 2016 100 breast Olympic bronze medalist Cody Miller.

Fallon might be the one who initially jumped off the page (before we learned he wouldn’t be in attendance), but there are several youngsters that figure to be in the 200 breast mix in Greensboro.

The only swimmer competing we’ve yet to mention who broke the 2:10 mark in 2021 is Stanford’s Daniel Roy, who is coming off his senior year with the Cardinal where he came within a tenth off his SCY best time in 1:51.17 to place eighth in the ultra-competitive NCAA final.

Other swimmers coming off of NCAA campaigns that could factor into the final are Jake Foster, AJ Pouch, Josh Matheny and Reece Whitley.

Whitley is the only one of the four who didn’t swim a lifetime best during the 2021-22 NCAA season, but his PB is one of the fastest in history, so that’s not necessarily an indication he’s not on good form.

NCAA runner-up Max McHugh is certainly more of a short course specialist, owning a best of 2:12.61 from last July, while two swimmers out of the NCAA consolation final, Cal’s Liam Bell and Jason Louser, could have an impact after making big drops in the yards pool.

Darkhorse: Maxwell Reich – Reich recently finished up his sophomore year at Indiana, bringing his lifetime best in the SCY 200 breast down from 1:56.1 to 1:53.8 over the course of the season. In the long course pool, he was 2:13.0 twice in 2021 and may have a nice drop in him given his short course progression.

I am BEGGING for Licon! I’ve been following his career for maybe 7 years now, and I feel he’s more than deserving of top 2. He could also break a bit of a Texas curse with the struggle some of their pro swimmers have shown after their promising college careers.

Schooling, Clark, Conger, they all struggled after their NCAA careers wrapped up.

Let’s Go Licon. You can do it boss

Even the top spot is more open than people think. I’ve heard Fink has been dialing down the training a bit due to grad school.

This is Will Licon’s time, he has been so close so many times

I hope he is the second person also. He didn’t look very good at last pro series

Give aj pouch a bio