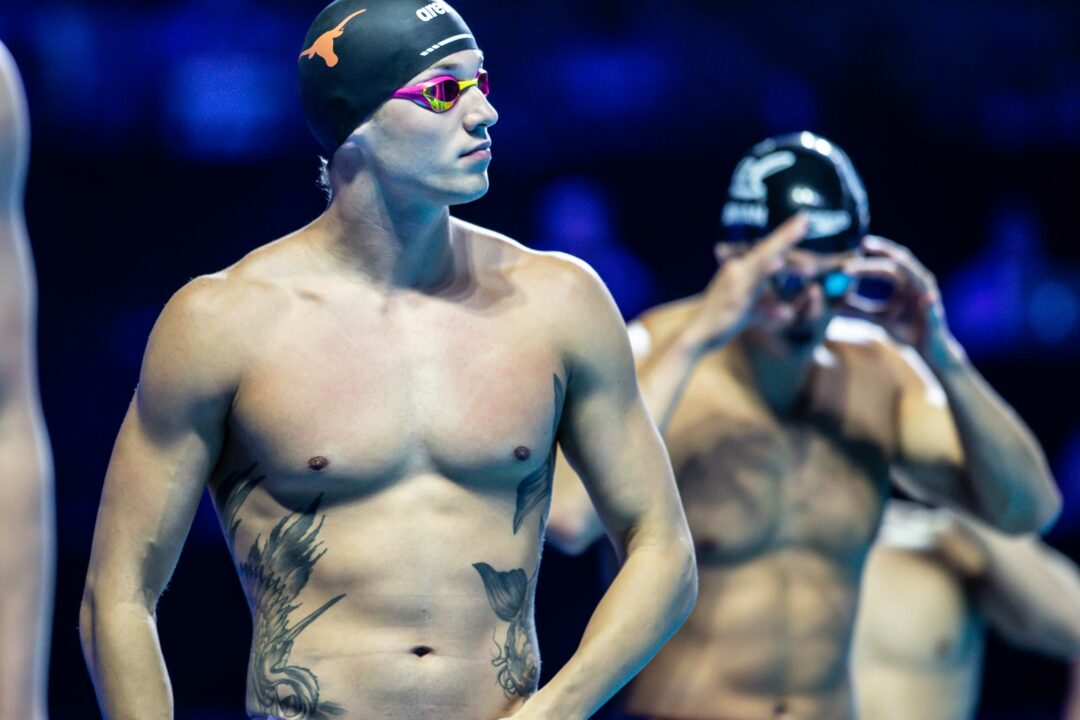 Drew Kibler and the Texas Longhorns are primed to make it three in a row in the 800 free relay next week at the Men's NCAA Championships. Archive photo via Jack Spitser/Spitser Photography

The men’s 800 freestyle relay has gotten significantly faster since it was moved up to the opening night of NCAAs in 2016, with the all-time record dropping nearly five seconds (6:09.85 to 6:05.08) in the short time since.

That move, coupled with the fact that a 1:30-point 200 freestyle is no longer unheard of and is now almost expected for the best swimmers in the country, has made this relay an exciting six-plus minutes of racing to open NCAAs every year. In 2022, the 200 medley relay joins the 800 free on Wednesday night, but that shouldn’t take away from the thrills.

In terms of the actual race itself, Texas has been dominant recently, winning three of the last five titles, including two in a row. NC State went back-to-back in 2017 and 2018, breaking the U.S. Open Record both times, but that era has moved on and the Wolfpack were back in fifth last year.

Another thing that really drives home how much faster this event has gotten in the last six years is the fact that eight different schools have already been sub-6:10 this season, and seven of them are either tied or faster than the previous all-time record of 6:09.85.

Leading the field is a team that has really surprised everyone all season, the Arizona State Sun Devils, who redshirted their entire roster last season and therefore came into 2021-22 flying a little bit under the radar.

That showing puts them directly in the title hunt, with Texas’ winning time last year only slightly faster at 6:07.25. Joining House and Marchand on the relay were Carter Swift (1:33.61) and Julian Hill (1:32.20), who were about the same (adjusted for relay exchange) in the individual event at Pac-12s. The Sun Devils may need them to be sub-1:33 and sub-1:32, respectively, to have a chance to win, but nonetheless, they’ll be right in the thick of things for a top finish.

But Texas is the undisputed favorite.

The Longhorns have continuously churned out high-end 200 freestylers in recent years, and despite losing half of the team that won the relay title last season, they’re well equipped to make it three in a row.

Drew Kibler led off the 2019 team that set the U.S. Open Record in 1:32.0, and he’s improved leaps and bounds in the three years since, having now been 1:30-point on five separate occasions. He also made the U.S. Olympic team last summer as a member of the 800 free relay, and though he’s yet to break 1:32 this season, Kibler seems poised to join the sub-1:30 club at NCAAs.

Carson Foster swam third on the relay last season as a freshman, and provided a swift 1:31.1 anchor leg at Big 12s as the Longhorns put up a time of 6:08.76 which ranks fifth this season coming into NCAAs.

Carrozza also split 1:32-low on the relay at the Minnesota Invite, which undoubtedly secures his spot on the NCAA relay, while Hobson will probably get the nod over Larson after splitting 1:31.3 on the ‘B’ relay in Minneapolis.

If the team is firing on all cylinders, the U.S. Open Record could be in jeopardy, but the title is still by no means a sure thing.

OTHERS SUB-6:10 THIS SEASON

Along with ASU and Texas, Florida, NC State and Stanford have been sub-6:09 this season, while Georgia, Louisville and Cal make it eight teams under 6:10.

Starting off with Florida, the Gators boast the reigning NCAA champion in the individual 200 free in Kieran Smith, who was 1:29-mid leading off this relay twice last season and went 1:30.42 going first last month at SECs. With Trey Freeman going 1:32.2 (and splitting 1:31.9 on the relay), Florida has two of the six fastest 200 freestylers in the NCAA this season, and Oskar Lindholm (1:32.2) and Alfonso Mestre (1:33.3) shored up the SEC relay lineup. Bobby Finke is an option, but nothing indicates he’ll get the nod over Mestre.

The Georgia Bulldogs, who were the runner-ups behind Florida at SECs, had a very consistent four legs there with splits ranging from 1:31.8 to 1:32.9. In fact, Florida’s margin of victory over UGA came entirely on the lead-off leg (where Smith was 1:30.42 to Matt Sates‘ 1:31.82), as Georgia out-split the Gators by eight one-hundredths over the final 600.

Miller, Tapp and Knowles have all taken steps forward this season, and Hoover has come into his own as a freshman. Even more so than UGA, NC State has four swimmers you can almost bank on being 1:32 or better, which puts them in a favorable position in this race. They’ve even got a fifth swimmer, Noah Bowers, who has been 1:32.9 this season.

Louisville also has a solid quartet, led by fifth-year Nicolas Albiero, who was their top split at ACCs in 1:31.8. Murilo Sartori has had an impressive freshman season, solidifying himself as a reliable 1:32 flat-start swimmer on the opening leg. Colten Paulson has also been 1:32 multiple times on relays, making the Cardinals a good bet for the top eight.

While all of the shine when to Arizona State at Pac-12s after winning this relay, the Stanford performance was truly something special, particularly on the back-half where freshman Ron Polonsky (1:31.50) and sophomore Preston Forst (1:31.15) threw down blistering legs to solidify the runner-up finish.

Cal has a formidable lineup as well, led by Trenton Julian, who was 1:31.4 both leading off the NCAA relay last season and as the third leg this year Pac-12s. Along with freshman Gabriel Jett and sophomore Destin Lasco, the Bears are strong, and Swedish first-year Robin Hanson could be the difference-maker to break them into the top three. Hanson was 1:33.5 leading off the Pac-12 relay, but went 1:32.7 individually. For a guy who has been 1:46.5 in LCM, Hanson could easily be somewhere in the 1:31s and push Cal up a few spots.

We also can’t forget that Jett was a bit off at Pac-12s, and went 1:32.5 flat-start at the Minnesota Invite. Cal could well have four guys capable of going 1:31, at least with a takeover, and the question then becomes if they can all put it together at the same time. It speaks volumes that two members of last year’s NCAA relay, Daniel Carr and Bryce Mefford, are back this season but won’t have a spot on this team.

The Hoosiers rolled to a big win over the Wolverines in this relay at Big Tens, led by freshman Rafael Miroslaw with a 1:31.89 lead-off leg.

Michigan had a solid 6:11.02 swim at the Minnesota Invite, but no longer have Wyatt Davis in the lineup after he left the team to focus on his mental health. Patrick Callan, Jake Mitchell and Gal Cohen Groumi give them three guys in the 1:32-range, but are lacking a fourth to make them truly competitive.

Note: SB add-up includes the four fastest flat-start times from the team’s swimmers this season. This may not be indicative of a team’s ability in instances where a swimmer who is used on the relay doesn’t swim the 200 free at a taper meet.

I just love how you are so enamored and overrate Florida AND underestimate Georgia. Did you watch the 800 free relay finals?

I think all four will be a bit faster than that, probably Hobson the most…

that 6:05 really looks like its going down Carson Foster split 1:41 low SCM and should be able to go a 1:30. from a split, seems like Hobson will split 1:30. too as he seems to be continuing to drop, Drew is doing Drew Kibler things so should be doing good there, and coby is the only leg that I question in this that being said seems like he’ll split a low 1:31 which would put them over a second under the record. Hope it happens

Georgia definitely underrated. However, I believe ASU is fairly ranked considering they didn’t use their fastest quartet.

A LITTLE worries about Kibler; he’s normally faster in season for the 200 and drops a little bit. Plus he’s in his Olympic slump year. But I don’t think that will change the outcome of this relay