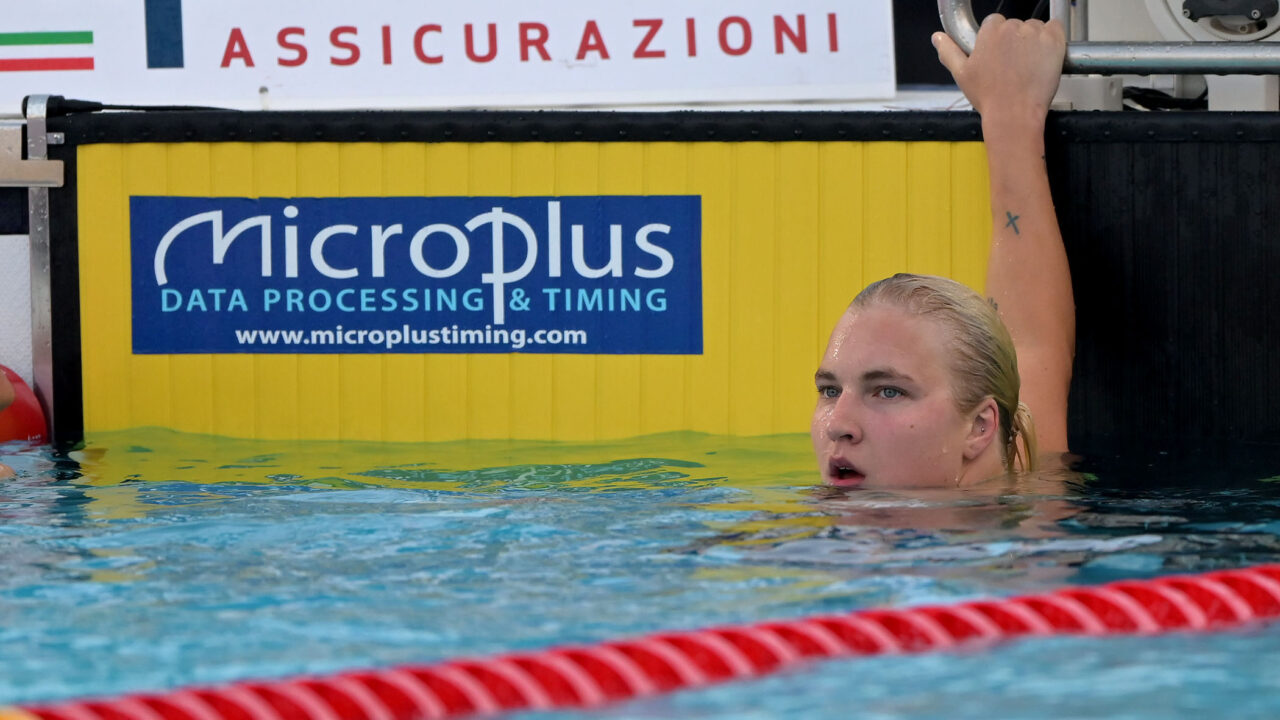 We’re entering the final day of the second stop of the FINA World Cup Series, with action kicking off from Toronto momentarily.

The lineup of events renders big-time talent ready to close out the meet with a bang, including host country swimmers Maggie MacNeil, Kylie Masse and Summer McIntosh.

MacNeil is set to battle the likes of Sweden’s Louise Hansson in the women’s 100m butterfly while both Masse and McIntosh have the women’s 200m back on their schedule. McIntosh, who has already nabbed two World Junior Records here, will also be contesting the 200m IM this morning.

Lithuania’s Ruta Meilutyte cranked out a new European Record in the women’s 50m breast last week in Berlin and she’s leading the pack in the event here as well.

The reigning World Record holder in the men’s 100m back, Coleman Stewart of the United States, is expected to race his key event while several contenders will enter the ring in the women’s 100m free, including Siobhan Haughey of Hong Kong and Madi Wilson of Australia.

Men’s 400m IM final results will be included after the fastest heat in the evening session.

Sweden’s Louise Hansson wasted no time staking her claim on this women’s 100m fly event. The former USC Trojan produced a super quick morning time of 55.59, representing the only swimmer of the heats to get under the 56-second threshold.

Last week in Berlin the 25-year-old Olympian took the gold in a mark of 55.33 so the Swede is already within .26 of that result.

Canada’s Maggie MacNeil will try to stand in her way, however, fueled by her 50m fly victory from last night. MacNeil grabbed the gold in that sprint in a new Canadian record so she has some momentum behind her to put Hansson to the test.

Brazil may make a run at a minor medal with Giovanna Diamante claiming the 3rd seed in 57.70, while American Linnea Mack lurks as teh 6th seeded swimmer with a morning time of 58.50.

For Carter, the former USC Trojan won this event last week in Berlin in a time of 22.13, within striking distance of his own national record of 21.98 from the 2021 FINA Short Course World Championships when he took silver.

Canada nabbed the top 2 spots in this women’s 200m back, led by national record holder Kylie Masse. Masse easily led the morning heats with a solid 2:04.02, while 16-year-old Summer McIntosh was next in line with a mark of 2:05.52.

For McIntosh, her result here marks a new lifetime best. The teen already made some fireworks happen here in Toronto by way of her World Junior Records in the 400m free and 400m IM, the former of which beat American Olympic icon Katie Ledecky in the process.

The winner from the women’s 2back in Berlin is also in the mix here, as American Beata Nelson cruised to the 3rd seed in 2:06.03.

Another Canadian in Ingrid Wilm holds steady as the 4th seeded swimmer in 2:06.20 while Dutch record holder Kira Toussaint continues to race with a finger injury, capturing the 5th seed in 2:06.56.

Leading the way in this men’s 100m backstroke was Kacper Stokowski of Poland. The 23-year-old scored a time of 49.98 as just his 5th time ever under the 50-second threshold.

Stokowski owns a lifetime best of 49.80 from when he placed 5th in this event in Abu Dhabi, a time which rendered him Poland’s #2 performer all-time.

Stokowski will need to be perhaps even faster if he wants to rival Coleman Stewart of the United States for the top prize, Stewart is the reigning World Record holder with his 48.33 result from 2021.

Shaine Casas, also from the United States, sits comfortably as the 5th seed with a morning swim of 52.08. The 1back winner from Berlin, Casas already made big-time history last night, taking the men’s 200m IM event in a time that made him the 2nd fastest man ever.

Last week in Berlin we saw out-of-retirement Ruta Meilutyte of Lithuania rip a new European Record in this women’s 50m breast event. The Olympic champion clocked a time of 28.60 to beat the field by over a second en route to topping the podium.

This week, however, Meilutyte has American Lilly King with which to contend, with multi-Olympic medalist King securing the top seed this morning in a time of 29.90.

Meilutyte is right behind in 29.91 while last week’s bronze medalist, Anastasia Gorbenko, looks primed to make a run at another medal with her morning outing of 30.37.

Gorbenko has also been under the 30-second threshold in her young career, owning the Israeli national record with the 29.34 she produced for gold. at the 2021 FINA Short Course World Championships.

Brazil took its first top seed of the day, courtesy of Caio Pumputis in this men’s 200m breaststroke. Pumputis produced a time of 2:05.68 to land lane 4, with Lithuanian Andrius Sidlauskas flanking him with a heats time of 2:06.16.

Of note, 7th-seeded Adam Chillingworth, just earned a new Hong Kong national record en route to nabbing a slot in the final. The previous national mark stood at 2:09.14 so Chillingworth obliterated that former standard with his outing here. He already owns the HKG national record in the long course 200m breast (2:12.17).

Chillingworth actually used to represent Great Britain but moved his nationality to Hong Kong as of this past summer.

The Polish speedster stopped the clock in a swift 52.17 to hold a .14 advantage over runner-up seed Maggie MacNeil of Canada. This makes 2 finals for MacNeil for tonight, as she already raced the 100m fly earlier in this session.

Hong Kong’s Siobhan Haughey, the reigning short course world champion in this event, punched a morning swim of 52.50 as the 3rd seed while 2 Australians are also among the medal contenders for tonight.

After missing out on the 200m free final, multi-medalist at this year’s long course World Championships, Meg Harris, raced her way to the 5th seed in 52.83. Teammate Madi Wilson is one slot ahead of her with a 4th-seed-worthy mark of 52.71.

Wilson was the silver medalist behind Haughey in this event last week in Berlin, having produced a time of 52.00 to Haughey’s 51.59.

Matt Sates of South Africa is on a mission once again at this FINA World Cup. The former University of Georgia Bulldog raced his way to the top of the men’s 200m freestyle heats, clocking a morning time of 1:43.58.

Sates is coming off of a decisive victory from Berlin where the 19-year-old scored the 2free gold in a time of 1:40.88. That was just a hair of off of his own lifetime best and World Junior Record of 1:40.65 from last year.

Hoping to stand in Sates’ way, however, is Lithuanian veteran Danas Rapsys. The reigning bronze medalist in this event from the 2021 FINA Short Course Championships, 27-year-old Rapsys sailed into the 2nd seed in 1:43.77, hoping to improve upon his 4th place finish from Berlin.

American Drew Kibler threw his hat into the potential medal ring with a 1:43.78 morning swim, while a pair is tied for 4th in Breno Correia of Brazil and Luc Kroon of the Netherlands. Both hit 1:43.80 to make their way to the final.

For his part, Correia is coming off of this year’s South American Games where the 23-year-old took bronze in the long course 200 free, as well as gold as a member of the Brazilian men’s 4x200m free relay.

Of note, last week’s silver medalist in this event, Kyle Chalmers of Australia, did not race the 2free today. Also, South Africa’s Le Clos missed the final, placing 10th in 1:44.87.

Nothing too crazy happened in this women’s 200m IM prelim, other than the fact it was a Canadian talent show. The host nation claimed all but the 3rd seed, with American Beata Nelson as the sole outlier in 2:09.70. Nelson took the 2IM title last week in Berlin in a winning effort of 2:06.80.

Chalmers didn’t swim any fly events at SCW trials, but that 50 fly he just swam in heats is only 0.09 off Matt Temple’s winning time. They may end up sticking him in the individual event or even the relay since the 2-4 place swimmers didn’t make the team.

He already had the QT from World Cup last year (22.24). He might also get to swim the 50 fly in the mixed medley relay (McKeown/O’Callaghan Williamson Chalmers McKeon?) because his PB is quite a bit faster than Temple’s.

I knew he already had the QT but typically you’d swim every race at trials you want to compete in I would think.

Yeah sorry when I said they might stick him in the relay I meant the mixed relay. I assume he’ll be swimming free on the men’s. Although, Bell is only 0.3 off Chalmers in the 50 so it might actually be faster to go Chalmers-Bell than Temple-Chalmers depending on how everyone is going.

True. I guess it depends whether Temple or Bell is in better form.

Obviously for the 100 relay Kyle will go free.

Ruta playing with Lilly in prelims. 😂

USA has lost to Canada in the women’s 4 x 100 meter freestyle relay at the last major international competitions.

Out of the 8 womens sprint events (50-100 of each stroke), US women won 2/8 and medaled in 5/8. Not amazing, but certainly not as dramatically bad as is being suggested.

Emma McKeon posted a much faster time (23.99) in the women’s 50 meter freestyle at the 2022 Commonwealth Games than Harris and Brown.

She goes by Torri professionally for a reason. Just use the name she chose to use internationally instead of being all creepy and formal.

No Ledecky in the 2IM. Did we already know she was scratching today?

Yes, we were comparing LCM to SCM. Fixed above.

Looks like she dipped under the Ontario record for 16 Yr olds. Sinead Russell had it at 2:06. Considering the backstroke talent that has come from Ontario in the last decade it’s impressive.

This is random and I don’t know where to ask, but do we know why Torri Huske didn’t swim on Friday at Washington State?