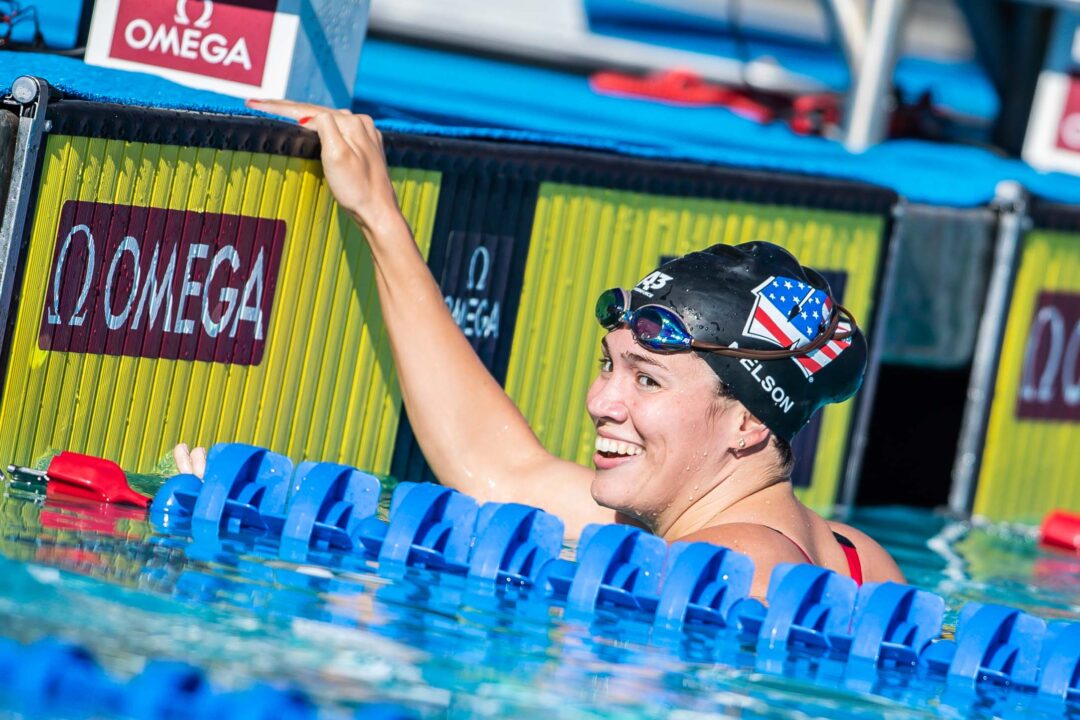 “I am not usually a slap-the-water lady, but it's been a long three weeks and I am really happy with the finish,” Beata Nelson said. Archive photo via Jack Spitser/Spitser Photography

Beata Nelson typically has a reserved demeanor around the pool deck, but the 24-year-old American couldn’t help but let some emotion loose after sweeping the 200 back and 200 IM on Saturday night. The swims helped clinch a pair of Triple Crowns worth $10,000 each as well as the top overall standing on the World Cup series worth $100,000.

Nelson clocked a time of 2:00.43 in the 200 backstroke, nearly becoming the sixth woman in history to break the two-minute barrier. Then she posted a 2:04.92 in the 200 IM to cap off her three-week run of dominance.

“My family is in the stands, my boyfriend is up there and I have club coaches that I have known for years who are here watching,” Nelson said. “This pool has been a place of special memories for me in the past and I am really happy to get this done on home soil.”

Nelson totaled 12 medals on this year’s World Cup series, nine gold and three silver, to go along with her prize money earnings exceeding six figures. She finished with 173.7 points to beat out second-place finisher Siobhan Haughey of Hong Kong.

Haughey also secured two Triple Crowns in Indianapolis with her victories in the 100 free (51.00) on Saturday and 200 free (1:51.19) on Friday. Although she wasn’t entirely satisfied with her times, she was pleased with her improvement and vowed to be “ready” for the Short Course World Championships next month in Melbourne.

“I am excited to have another training block before Short Course Worlds,” she added. “The 100 free is very competitive and I try to focus on my own race and not to rush the first 25. I am very excited for Short Course Worlds. After these races I know the things that I need to work on and I will be focusing on them. I will be ready for Melbourne.”

Katie Ledecky spoke to media on Saturday after smashing her second world record in the past week. The 25-year-old broke the 1500 free world record in Toronto, but she left unsatisfied after her 800 free split in the race was just a second slower than the world record. In Indianapolis, Ledecky posted a 7:57.42 to lower Mireia Belmonte’s previous mark by almost two full seconds.

“I pushed myself a lot after last week,” Ledecky said. “It’s great to have all these fans here to cheer us on. It’s nice to have some benchmarks (in short course). I am really happy to be here and racing at the World Cup events.

“I was putting some pressure on myself after my swim in Toronto,” she added. “I wish I had done it in Toronto. It’s always nice when you can hear a little bit of the crowd. It’s a fun way to start the fall and kick off the season. We usually don’t get the season started with an international level meet so it’s a little different for me.”

Nic Fink was just .3 points away from the $100,000 crown on the men’s side behind Dylan Carter, but the 29-year-old American had no complaints after sweeping the 50, 100, and 200 breast. He closed his World Cup performance in dramatic fashion by taking gold in the 200 breast (2:02.70) from lane 8, bouncing back from the slowest finals qualifying time of the morning.

“I was rattled a little bit,” Fink said of the morning swim. “I was in control of my heat this morning I guess I let the first two heats get away.  My eyes were wide open. I was happy to get a lane, knowing that if you get a lane you get a chance.

“It’s an opportunity to swim your own race and that’s what I did tonight,” he added. “I swam a 2:03 or 2:04 in Toronto. It’s pretty awesome to be the top breaststroker in all three. I am looking forward to getting some crowns in the mail from FINA.”

Ruta Meilutyte credited her Lithuanian supporters on the series after throwing down the fourth-fastest swim ever in the 50 breast (28.70) to complete her Triple Crown.

“I am really happy to get the crown. I really wanted it,” Meilutyte said. “Everywhere we go, there are a bunch of Lithuanians cheering for us and that’s inspiring. I am happy to be enjoying the process of training, competing and winning. “Right now I am not thinking (about the World Championships) I want to clear my mind and refocus.”

Shaine Casas also claimed a Triple Crown on the final day of the World Series with his 100 back win in 49.40. Afterward, he called the result a “surprise.” Casas was gunning for the world record of 48.33.

“That race was a surprise to me,” Casas said. “I wanted to go a second faster. It felt really good but sometimes it doesn’t happen the way you want it to happen. I worked on what I have been doing. I am pretty obsessed with being number one, winning, and with my times. I really wanted to swim a bit faster but at the end of the day I got the job done.”