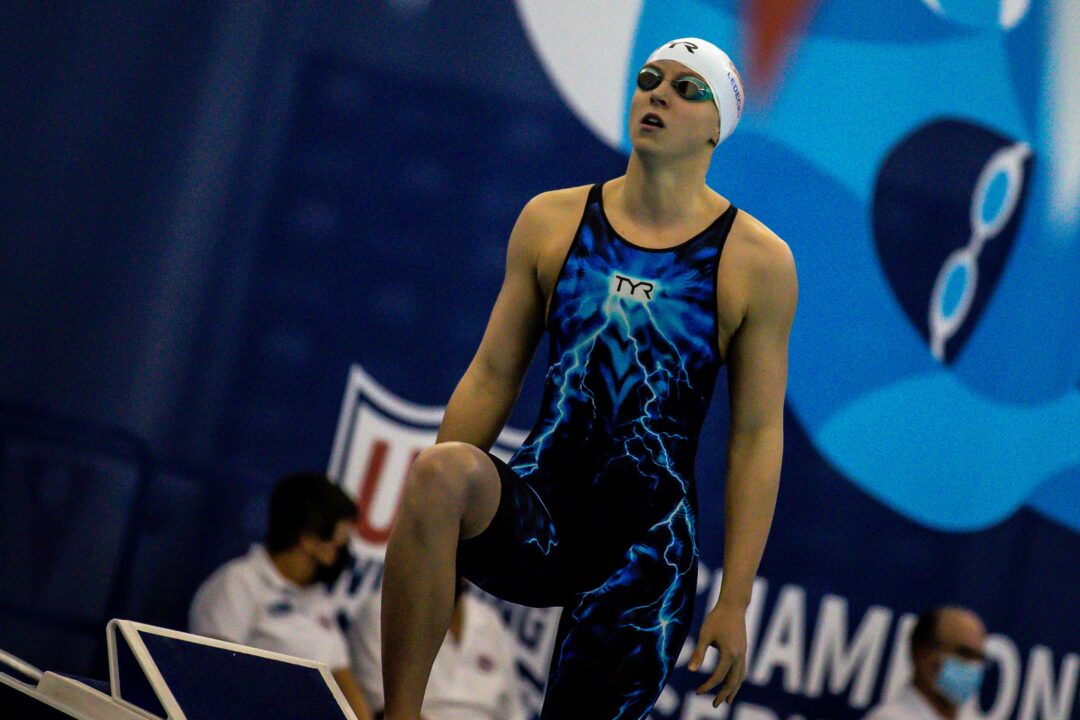 In this article, we attached videos of what we thought were the top ten best swims of this year's three FINA World Cup series stops. Archive photo via Jack Spitser/Spitser Photography

Over the last few weeks, we’ve seen plenty of incredible short course meters racing from the three FINA World Cup stops in Berlin, Toronto, and Indianapolis. In this article, we attached videos of what we thought were the ten best swims of this year’s world cup series, including world records, world junior records, and just fast swimming in general. That being said, the “top ten” is always up for interpretation, so feel free to share what you felt were your top ten races from the world cup in the comments below.

NOTE: The races below are not ranked in order.

All videos are either courtesy of FINA or Noah Banville on YouTube.

Putting this race in was a no-brainer. In her first time swimming the 1500 free in short course meters, Katie Ledecky smashed Sarah Wellbrock‘s world record time of 15:18.01 by nearly ten seconds, going 15:08.24. In fact, Ledecky’s 800-meter split to the feet was a 8:00.58, which is just off Mireia Belmonte‘s then-world record of 7:59.34. Ledecky’s lead grew throughout the entire race, and she ended up winning by over 40 seconds. It was her first world record since breaking the 1500 free long course record in 2018.

Just a week after breaking the 1500 free world record, Ledecky once again broke a world record in her first time swimming the event. This time, it was Mireia Belmonte‘s 800 free world record, which Ledecky took down by nearly two seconds in a time of 7:57.42. The world record line was catching up to her towards the end of the race, but she still put on a dominant showing in front of an electric home crowd in Indianapolis.

Leading from start to finish, Shaine Casas once against showed his prowess in IM by getting closer to Ryan Lochte‘s 200 IM world record than anyone has ever been. He swam a time of 1:50.37, which broke Daiya Seto‘s World Cup record of 1:50.66 and makes him the second-fastest performer of all-time behind Lochte. What’s particularly impressive was that Casas pulled off this feat at an in-season meet, approaching the records of one of the greatest short course swimmers of all time at his peak.

In a nail-biter race, Bella Sims surged past Beata Nelson on the final 25 to beat her by a margin of 0.15 seconds and thwart her hopes of a triple crown after she won the 100 back at both the Berlin and Toronto stop. The 17-year-old Sims broke the World Junior record in this race and became the 15th-fastest 100 back performer of all time, which came as a surprise to many considering that she’s better known for her mid-distance freestyle. In fact, the 100 back was Sims’ second world junior record of the day, as 12 minutes prior, she had taken down the world junior record in the 200 free.

Holding a body-length lead over the rest of the field, Ruta Meilutyte swam her way to a new European record time of 28.60, overtaking her old record time of 28.81 that she shared with Benedetta Pilato by a whopping 0.21 seconds. She was also just 0.04 seconds off of Alia Atkinson’s world record of 28.56, and is now the second-fastest 50 breaststroker of all time. And while Meilutyte was slower in the 50 breast at the latter two stops of the World Cup meet, she still won the event three times to earn a triple crown.

Dylan Carter completed a rare and impressive feat at this year’s World Cup series, going three for three in the 50 free, 50 fly, and 50 back. His final victory was the 50 fly in Indianapolis, where he went a time of 21.99, getting 0.01 of a second away from his best time of 21.98 that took second at the 2021 Short Course World Championships behind World Record holder Nicholas Santos. Carter was actually just 0.24 seconds away from the world record in Indy, and his swim is tied for the 21st-fastest of all time.

Although Katie Ledecky was dominant in the distance races at the World Cup, one of the races she didn’t win was against 16-year-old Summer McIntosh. There was an extremely tight battle between the two swimmers, with Ledecky leading for the majority of the race, but McIntosh passing her at the 300-meter mark before Ledecky regained the lead at the 350. Finally, on the last 25, McIntosh outsplit Ledecky 13.91 to 14.22 to take the win by 0.08 seconds. McIntosh and Ledecky’s final times of 3:52.80 and 3:52.88 respectively made them the second and third-fastest performers of all-time.

In yet another close World Cup race, Maggie MacNeil and Louise Hansson went wire-to-wire. Hansson had the lead after the first 25, but MacNeil passed her after that and was first for the rest of the race, although Hansson was never too far behind her. In the end, MacNeil and Hansson touched the wall in times of 54.78 and 55.02 respectivley, making themselves the third and fourth-fastest performers of all-time. In addition, MacNeil’s time broke Kelsi Dahlia‘s world cup record of 54.84.

Despite being 30 years old, Kasia Wasick is still at the peak of career, as she set yet another personal best time at the Indianapolis World Cup stop to earn the 50 free triple crown. This time around, she went 23.10, which made her the third-fastest performer of all time behind Sarah Sjostrom and Ranomi Kromowidjojo.

In his first meet with his new coach, Dirk Lange, Chad Le Clos swam a 48.58 in the 100 fly, which was the sixth-fastest 100 fly time of his career (and the tenth-fastest time of all-time). This performance came just weeks after he opened up about his struggles with depression and seeking therapy in the past few years.