In a presentation last month on Schreiner University’s long-term plans, Schreiner president Charlie McCormick said that the school was prepared to add a football and women’s swimming program, according to the Kerr County Lead. And while the approval of a women’s swim team has not been made official, Schreiner University officials allowed former NFL player and Schreiner alum Charles Johnson to formally announce yesterday the addition of Schreiner’s football team that would begin competition in the fall of 2025.

McCormick said that Schreiner would consider partnering with the city of Kerrville to renovate the school’s “Olympic pool complex”. The pool renovation, as well as a football stadium and a track and field complex that are also planned additions, would cost around $30 million in spending.  Currently, Schreiner has one pool on campus—an outdoor pool called the Edington pool.

In a survey conducted by Schreiner on what sports they should bring to campus, the school’s students voted for football as the number one choice and swimming as number two, while the faculty voted for swimming as number one and football as number two. McCormick believes that adding football will result in a 40% increase in student and staff numbers, and would be a way for “some young men to find their way to college and to complete college”. In addition, football would be part of a larger effort to make Kerrville more of a “college town”.

Schreiner has a total undergraduate enrollment of 1,017 students as of fall 2021, although the school’s graduation rate is 48%.

We need a picture! I couldn’t find anything

This was the photo from the campus map. 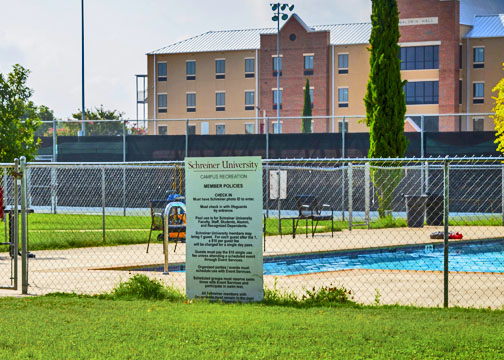 It looks pretty small (although you can only see a little corner of it), but I’m guessing that the renovations will fix that problem. In the Kerr County Lead article I linked at the top of the article, you can see a sketch of what renovations they plan on doing to the pool.

Aerial view on google maps it looks like this could actually be 8 lanes and 25 yards
and this photo could be a different angle on the one shared above
https://www.google.com/search?q=schreiner+university+pool&sxsrf=ALiCzsbrToBqP00LS7RWsEjrlsslOQiRJw:1668047401565&source=lnms&tbm=isch&sa=X&ved=2ahUKEwjPv9rmyKL7AhVDm2oFHYdbBzIQ_AUoAnoECAMQBA&biw=1439&bih=707&dpr=2#imgrc=oCoimz_wz_dztM

Yeah, I saw that photo too, except it’s a photo from the 1990s so I didn’t want to cite it “officially”. You could be right, though. I agree that the aerial view on maps does makes it seem bigger than the photo I showed.