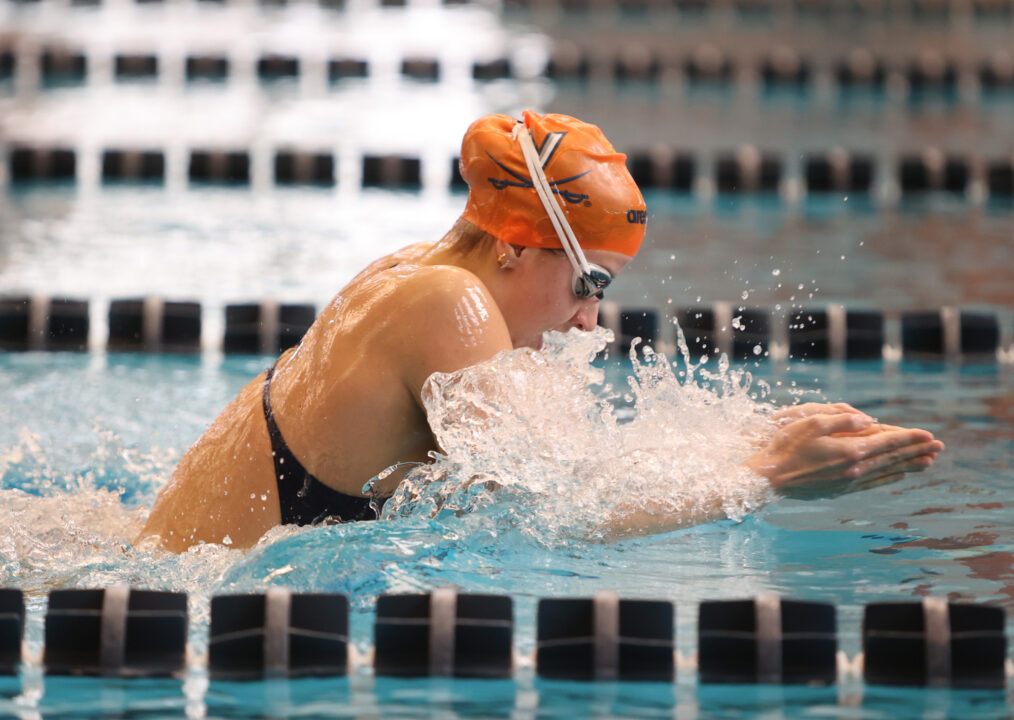 Despite being the third-fastest performer in history and 2020 ACC champ in the 200 IM, UVA junior Kate Douglass will race the 50 free instead today. Current photo via Matt Riley – UVA Communications

Heat sheets for this morning’s prelims session are out, and the biggest news is that UVA junior Kate Douglass is going to race the 50 free instead of the 200 IM. The incredibly versatile Douglass is among the best swimmers all-time in either event. She won the 200 IM back in 2020, and she’s the third-fastest performer in history, with a personal best time of 1:50.92 from November 2020. She also took bronze in the long course version of this event at last summer’s Olympics.

On the flip side, Douglass is the reigning NCAA champion in the 50 free. Last year she won NCAAs with a 21.09, which also ranks her as the third-fastest performer ever. She holds the conference records in both events.

With Douglass out of the 200 IM today, her teammate Ella Nelson will occupy lane four in the final heat, but the favorite is now probably Alex Walsh, another Cavalier who won an Olympic 200 IM medal, and who is the fifth-fastest performer ever in yards.

On the men’s side, the highest-seeded scratch came from NC State’s Luke Miller. He was seeded seventh in the 200 IM after taking 12th last season. He’s also entered in the 100/200 free, and the 100/200 fly, so watch for him to be swimming three of those four events later this week.

There are a couple more notable scratches from among the men that could indicate the swimmers are out for the meet. Louisville’s Ilia Sibirtsev and Tanner Cummings are both out of this morning’s heats, and each was only entered in three events, suggesting that they may both be out of the meet. Sibirtsev was only seeded 27th in the 500 free, but he scored 40 points across three events for Louisville last year, including a third-place finish in the 1650. Cummings scored 42 points last year, taking fifth in the 50 free and helping power the Cardinals’ sprint free relays.

It’s also worth noting that UVA’s Matthew Styczen doesn’t appear on todays’ heat sheet. He had some great swims at the Cavalier Invite last weekend, including the third-fastest 400 IM in the conference this season, but if he’s out of the 200 IM today, where he was seeded 16th, that’s a good indication that he won’t be swimming this week, presumably due to roster limitations.

Insane that the Olympic bronze medalist in the 200 IM can scratch the event at ACCs for the 50 free and we all agree that it’s a good decision. Douglass is such a versatile swimmer it’s insane

I thought for a while that she would be the first woman to go 1:49 in the IM. It may end up being her teammate that gets there first.

KD leaving that IM for AW

Yep, Alex about to go crazy in the IMs.