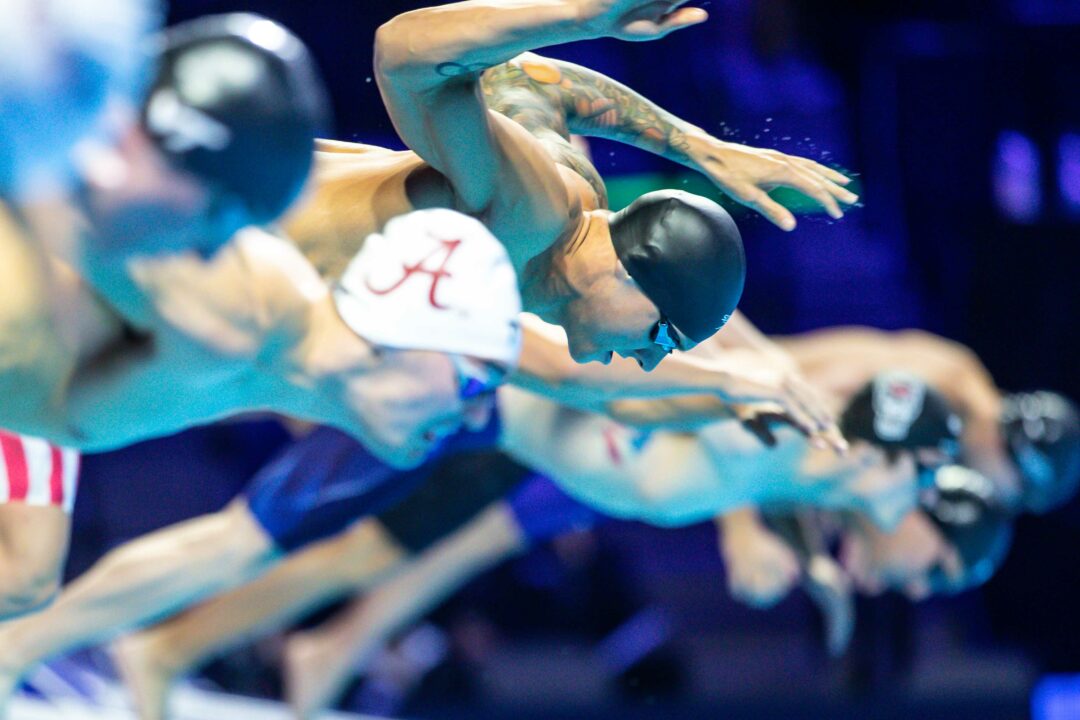 On the slate tonight will be the men's and women's 50-meter free finals, the fastest event in the pool, and the men's 1500 free final, the longest event. Current photo via Jack Spitser/Spitser Photography

This is it, we have arrived to the last finals session of the 2021 U.S. Olympic Trials in Omaha. On the slate tonight will be the men’s and women’s 50-meter free finals, the fastest event in the pool. Topping off the night will then be the longest event on the program: the men’s 1500 free final.

Headlining the men’s 50 free final include Caeleb Dressel and Michael Andrew, who both already are qualified in two individual events for Tokyo (Dressel 100 free/fly, Andrew 100 breast/200 IM). Racing next to Dressel will be three-time Olympian Nathan Adrian, who will need to execute the swim of his life to make his fourth Olympic team. Also highlighting the men’s final include Bowe Becker, who placed 5th in the 100 free final, along with sprint talents Justin Ress, Adam Chaney, Michael Chadwick, and high school grad David Curtiss.

Then, Abbey Weitzeil will aim to earn her second sprint sweep at Trials after winning both events in 2016 and taking the 100 free title earlier in the week. She will be joined by 2016 Olympian Simone Manuel, with one more shot at joining the 2021 Olympic team, and 100 fly champion and high school grad Torri Huske. Linnea Mack will also partake in the final along with 100 free runner-up Erika Brown, high school grad Gretchen Walsh, 200 IM runner-up Kate Douglass, and 100 free 5th-place finisher Catie DeLoof.

Bobby Finke will the headline the final event of the meet, the men’s 1500 free final, where he will aim to get a second event in Tokyo following his 800 free win. Michael Brinegar, 800 free runner-up, will swim next to Finke in hopes of securing another event as well along with the likes of open water Olympian Jordan Wilimovsky, Brennan Gravley, and teenagers Will Gallant, Arik Katz, Charlie Clark, and David Johnston.

I predict Manuel’s OTS is magically cured, and she qualified in 50 free

Bold prediction from 30 minutes after her swim, Texas Tap Water