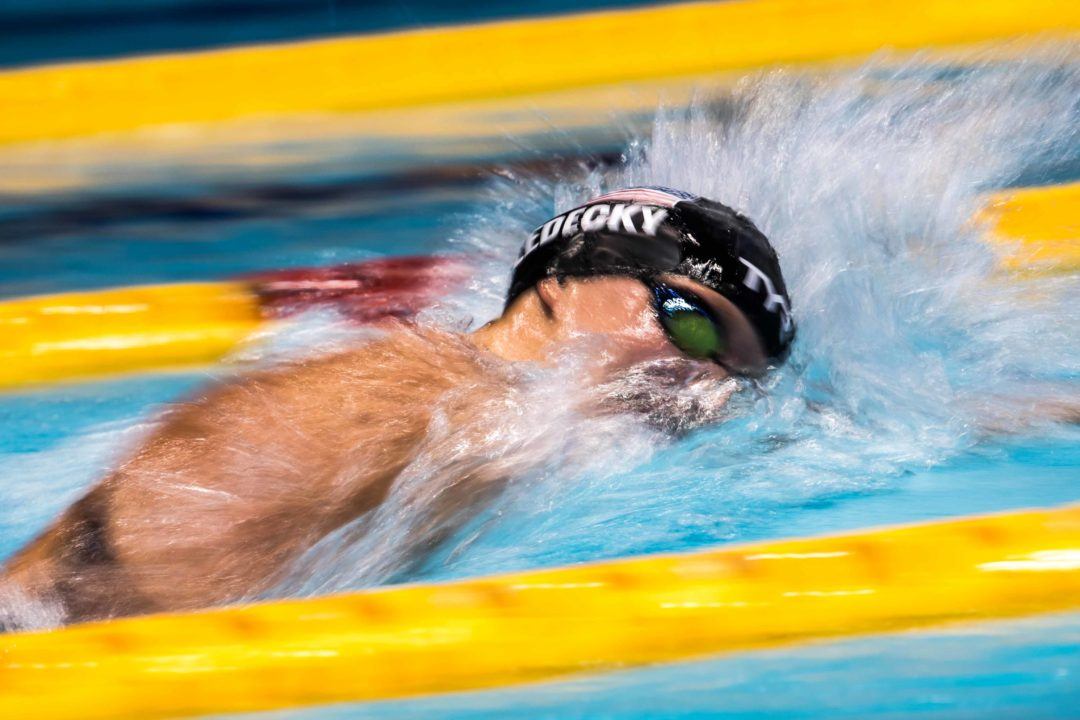 Katie Ledecky is the heavy favorite in every event from 200 meters upward in freestyle. But there's a fierce battle for the second Olympic spot in the 400. Archive photo via Mike Lewis/Ola Vista Photography

We can break down the 400 free field into two main groups:

This group includes every American World or Olympic champ in the women’s 400 free since the year 2013. In fact, Ledecky hadn’t lost a 400 free in her international-level career until the year 2019, when a visibly-ill Ledecky fell to just silver at the World Championships in Gwangju.

Ledecky is the world and American record-holder. She owns the top 7 swims in history in this event, with 2019 World champ Ariarne Titmus of Australia the only one breaking up a run of twelve Ledecky swims atop the all-time performances list. There’s not a lot of doubt as to who will win this event at U.S. Trials. But Ledecky’s swim still carries some major significance, as it could be a major statement for Ledecky in her efforts to take back world superiority from Titmus after 2019’s disappointment.

This should be Ledecky’s first event of Olympic Trials, so if there’s a big, emphatic statement to be made, it’ll probably come in this event on Monday night. Two swims under 3:58.7 would nearly give Ledecky back full ownership of the top 10 swims in history.

Leah Smith has quietly excelled in Ledecky’s shadow for years. Smith was 4:00.65 at Olympic Trials in 2016, and that time still makes her the #5 performer in history. Smith won bronze in her Olympic debut in Rio. She’s followed it up with silver at 2017 Worlds and bronze at 2019 Worlds, both years one spot behind Ledecky.

Smith and Ledecky have been a pretty rock-solid duo for Team USA this Olympic cycle. Smith has had a quiet 2021 training out of Arizona, but did have a nice ISL season and went 4:04.83 earlier this month on the Pro Swim Series. The biggest question might be whether Smith can join Ledecky, Titmus and former world record-holder Federica Pellegrini as the only women in history under four minutes. Smith hasn’t matched her 4:00 lifetime-best in nearly five years, but she did go 4:01 at Worlds in both 2017 and 2019.

Smith trains out of the University of Arizona as a pro. But elsewhere in the state, Emma Nordin has been rising as a star for Arizona State University’s college program. Nordin dropped nearly four seconds to go 4:33.7 in the 500-yard free during the 2019-2020 college season. But the coronavirus pandemic wiped out NCAAs and denied her a chance to win a national title. Then ASU bowed out of the 2020-2021 season, and Nordin has flown under the radar. But she just came through with 5.4-seconds-worth of time drops between April and May of 2021, culminating in a 4:04.60 at the Indy Pro Swim Series.

Where Nordin has a geographic connection to Smith, another top contender has a collegiate connection. Paige Madden won the 2021 NCAA title in the 500-yard freestyle, joining Smith as the only Virginia Cavaliers ever to win that event at NCAAs. In long course, Madden has won medals for Team USA at World University Games in the 200 free and 4×200 free relay. She’s probably more of a threat in the 200 free, but seems primed for a good drop in this 400 free as well.

Erica Sullivan is more of a distance and open water threat. But she popped a 4:06.35 in this race earlier this year and sits #4 among American women for the season. That’s going to make the 20-year-old Sullivan a major threat. Also in that open water/distance swimmer category are Olympic open water qualifiers Haley Anderson (4:09.8 this year) and Ashley Twichell (4:09.7 this year), who might opt to focus only on open water and the 1500, but could contend for finals spots down to this distance.

The 400 free doesn’t come with a lot of lineup conflicts. (The other women’s events on day 2 of Trials are the 100 back and 100 breast). But it is one of the more punishing events physically, and there are a few swimmers with potentially busy Trials schedules who might opt for a day of rest to gear up for a more likely Olympic qualifying event, instead of pushing for a finals spot here. Melanie Margalis (4:06.3 lifetime-best; 4:12.8 so far this year) will probably swim the 400 IM one day before this race and the 200 free/200 IM double the day after. Fellow Georgia alum Hali Flickinger (4:06.7 lifetime-best; 4:08.0 this season) will probably tackle some of the same events.

So will 19-year-old Emma Weyant (4:09.22 lifetime- and season-best), but she may actually prioritize this event over the 200 free or 200 IM. She took a gap year over what would have been her freshman season for Virginia, staying in Florida with her Sarasota Sharks, and could be an interesting upset candidate to knock off Smith for second.

A few other names of note: Kaersten Meitz won gold at 2019 World University Games, and Sierra Schmidt took bronze. The two are Big Ten alums – Meitz competed for Purdue and Boilermaker Aquatics and Schmidt for Michigan, though she’s now training in Arizona. Meitz probably sees this event or the 200 free as her best Olympic shots. She’s been 4:05.8 in this race. Schmidt swims upwards to the 800 and 1500 pretty well, but could still push for a final spot here.

As always, there are some rising youngsters to watch out for. 16-year-old Cavan Gormsen out of New York has dropped more than six seconds this year, dropping to 4:10.00. 15-year-old Bella Sims out of Nevada dropped 1.4 seconds last month to go 4:10.25. Claire Tuggle has been on the scene since breaking an 11-12 National Age Group record in this event, and she went 4:07.8 as a 15-year-old. But she hasn’t broken 4:12 since and would need a big breakthrough for the kind of upset Olympic berth some were projecting for her back in 2018 and 2019.

Rachel Stege won World Juniors bronze back in 2019 with a 4:08.3. She hasn’t broken 4:10 since then, but like Tuggle, is an elite young talent who might be on the cusp of a big breakout swim in the Trials spotlight.

Allison Schmitt was the 2012 Olympic silver medalist in this race. But she’ll turn 31 shortly before Trials and appears much more focused on the 200 free at this point in her career. She’s swum the 400 free just once since the pandemic, going 4:12.5 this month. Another big name probably absent is Cierra Runge, the 2014 Pan Pacs silver medalist who hasn’t registered a swim in any event since February of 2020.

Wave I Standout: Ellie Marquardt (lifetime/season-best: 4:13.4/4:13.7). As a college freshman, Marquardt blew up for Princeton, dropping nearly six seconds over the course of the season in the 500 free to go 4:36.3 and smash the Ivy League record. The Ivy League canceled its 2020-2021 season, leaving Marquardt to focus mostly on long course meters. The 400 free is her only event at Olympic Trials as of now, allowing her to focus entirely on pacing out this race. She’s also just two tenths of a second off the Wave II cut, so she’ll be one of the top seeds into the Wave I meet, and a very likely candidate to drop big time and move on to the Wave II meet.

Thank you for this fantastic coverage! Will there be a Pick Em Contest for Wave II trials?

Visibly ill what how was she visibly ill it wasnt apparent until she lost my god. Pay due respect to Arianne who beat her ok

She had to scratch the 1500 and 200 free because she had caught a bug in Korea. 3:59.97 is like an in season time for Ledecky, so obviously something was wrong.

To say Ledecky was visibly ill — which she was — does not connote a lack of respect for Titmus. SwimSwam will undoubtedly give Titmus a nice writeup and probably make her the favorite for the silver medal when it comes time to make Olympic predictions, but this article s about US Trials. Don’t be so sensitive.

I agree, Arianne was sub 4 and if she is there she can clearly beat Katie in 400.

The topic is the US Olympic Team Trials not Ariarne Titmus.

He’s fearful of any discussions of the Aussies

It seems like Leah Smith is a pretty favorite here until somebody else proves otherwise.

For the 2nd spot you mean right?

Emma nordin is improving fast and she outdueled smith in the 400 last week. I wouldnt be suprise is she becomes the top distance freestyler not named ledecky

A statement already has been made by Katie Ledecky.

Katie Ledecky posted the fastest time in the world for calendar year 2020 in the women’s 400 meter freestyle.

Katie Ledecky posted the fastest time in the world for calendar year 2021 in the women’s 400 meter freestyle.

The listed US Open Record provided at the top of the article is incorrect.

This is the US Open record: https://swimswam.com/ledecky-breaks-u-s-open-record-swims-2nd-fastest-400-ever-in-357-9/

As if she needs to make a “statement.” It’s like saying Serena needs to win Wimbledon again to make a statement.

Exactly, the greatest distance swimmer, if not JUST the GOAT swimmer of all time can come in to the Olympics with no statement swim & still be the most feared swimmer in every race she swims.

But Serena does have to win Wimbledon again to make a statement . I don’t know what her new statement will be , maybe its the joys of marriage . When she wins J promise to look it up . .

I remember the breaking news of 2016 Trials: “Leah Smith saw Katie Ledecky’s feet in 400FR race!”
I don’t think it will happen again, but the competition between Smith and Nordin will be exciting.
I like Leah very much. She just got unlikely to be in the shadow of Ledecky. But if to take Ledecky for a moment out of picture it will be clear how bright the achievements of Leah Smith are.
But in this particular race I will be rooting for Emma Nordin. The explanation is very simple. I don’t think Leah will have any problems to be the second in 800 race at Trials. And her chances to be out of podium at OG… Read more »