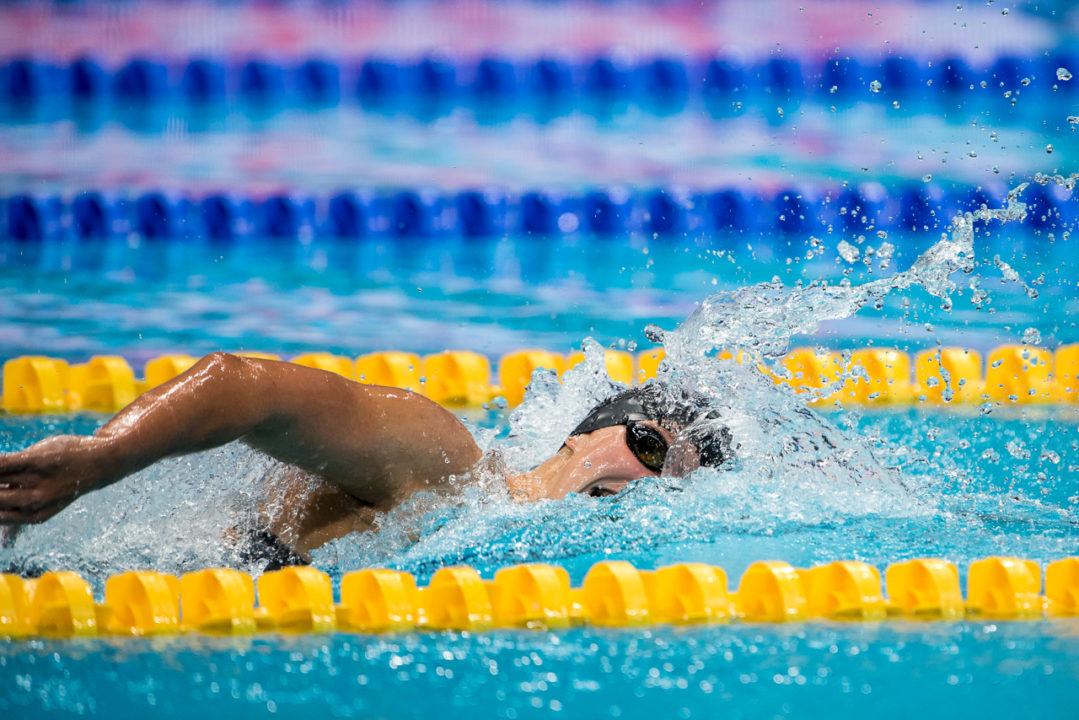 Katie Ledecky broke the U.S. Open Record in a time of 3:57.94 in the women's 400 free. Archive photo via Peter Sukenik/www.petersukenik.com

After an incredible world record performance in her first race as a professional last night, scorching a 15:20.48 in the 1500 freestyle at the TYR Pro Swim Series in Indianaplis, American superstar Katie Ledecky was back at it on Thursday. Ledecky uncorked a 3:57.94 in the 400 freestyle, breaking her own U.S. Open Record while registering the 2nd fastest swim of all-time.

Ledecky set the U.S. Open Record last summer, swimming to a 3:58.44 at the U.S. World Trials meet contested in the same pool she swam in tonight. Her 3:57.94 knocks former world record holder Federica Pellegrini out of the all-time top ten performances, as the 21-year-old phenom now owns the ten fastest swims ever. Pellegrini set the world record back in the super-suit era of 2009 in 3:59.15. Ledecky currently holds the world record at 3:56.46, done at the Rio Olympics.

Olympic bronze and World Championship silver medalist in this event Leah Smith was 2nd, over eight seconds back of Ledecky in 4:06.67, while Ledecky’s Stanford teammate Katie Drabot had a strong showing to take 3rd in 4:08.29.

Wouldn’t it be interesting if, some time when she’s fully tapered or something for a big meet, to have Katie put on one of the super-suits and see what kind of time she could turn in? Anyone care to speculate?

Or for that matter any of the current great swimmers in a now banned suit. I’d love to see Dressel in a super fast suit. Ledecky in a banned suit, just for fun. Knowing that it wouldn’t count for anything, just a test to see. That would be awesome.

One thing that I haven’t seen mentioned is that leading up to the 2016 Trials and Olympics, Katie Ledecky was just training and not attending school. As many people may recall, she started college a year later. Adjusting to a new coach and a college schedule (particularly after spending about a year just training) is definitely a challenge.

Beside talent & drive what KL has is to have been free of injury & sickness for 6 years .

She’s still at Stanford. Given their late schedule, she’s probably not even done with classes yet.

Is she > phelps? What does she have to do if not? Margin of dominance not enough?

Phelps had at one point missed the world record in the 100/200 back by less than a tenth, held the world record in the 200/400 IM, 100/200 fly, 200 free, held American record in 100 free, made national team in 200 breast, and won 8 golds in one Olympics…it’s kinda impossible. In my opinion Phelps was actually a bit underrated to be honest….super swim nerds who have no bias against Phelps for his out-of-pool actions: back me up here

It feels weird to say that the most dominant swimmer in history is underrated. But it’s true. Even his off years where he wasn’t committing to training, were phenomenal years for anyone else.

I’ll back you up here. Will never forget that Summer 2007 Nats in Indy when he swam the 100 and 200 back, probably not in peak form, and barely missed both of those world records. The guy stomped everyone at that ‘07 Worlds meet just months prior, winning races by 7-10 meters.

If anything, the super suits—which rewarded those with poorer technique more—probably brought everyone back closer to him.

To win 5 individual golds at a single Worldls or Olympics is simply incredible. To do it more than once completely insane.

Does she have the potential? Unquestionably. But you have to remember her 2016 Olympics is still only equivalent to Phelps ‘04, not the ‘07/08 model.

Continue at least through the 2024 Olympics if not the 2928 Olympics.

I am not in any way trying to lessen her accomplishments. I think she may already be the greatest freestyler ever, given her range from 200-1500 and ability to drop a fast enough relay split to make the US team. Add on her flat out… Read more »

They will when Mallory and Simone start hitting 51s

I think Thorpe’s the only other one even in the conversation (partly aided by the longevity of that 400 textile best, which KL can’t have yet), but I suspect in 20 year’s time even he will be out of that discussion.

No, Phelps was more versatile

The GOAT. End of story.