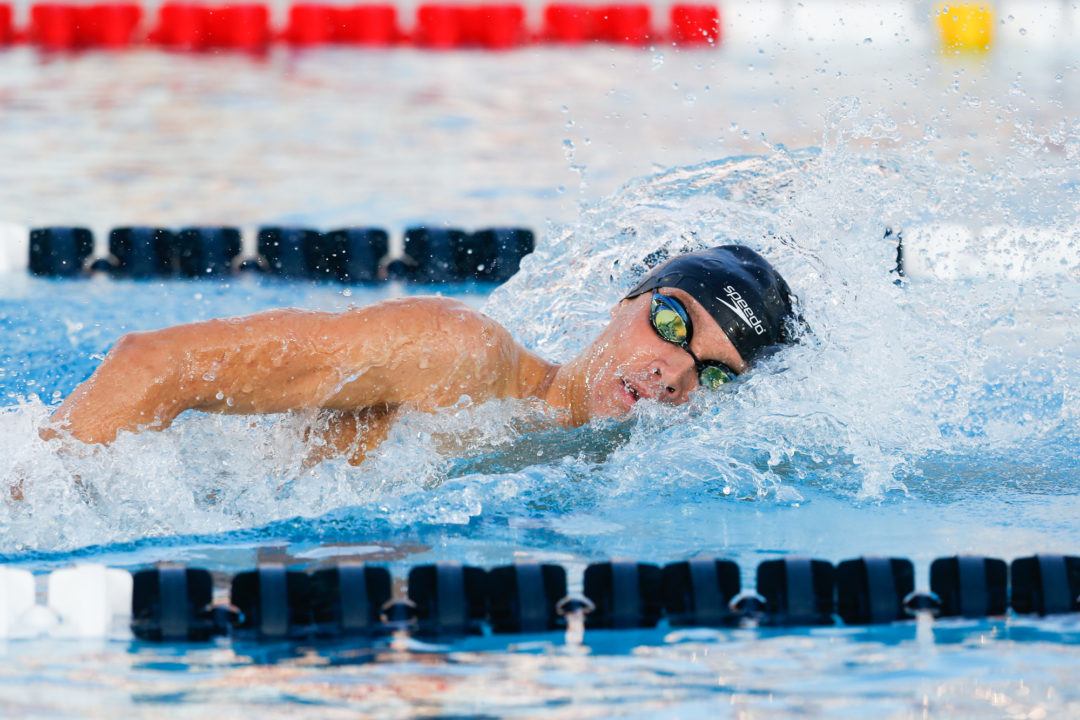 Fresh off NCAA gold in the 1650 freestyle, Bobby Finke is coming in hot in the 1500 free and will have a shot at making his first Olympic squad. Archive photo via Tim Binning/TheSwimPictures.com

Bobby Finke is our pick to win the event at Trials due to his significant improvement in the event over the past few seasons as well as his recent speed at 2021 NCAAs. Finke raced for the USA at the 2017 World Championships but wasn’t quite fast enough to advance past the prelims, placing 21st overall with a 15:15.15. Since then, Finke has rocketed to a 14:48.70 at 2018 Pan Pacs and also swam a 14:51.15 PB in the event at 2019 US Nationals. That 2019 swim makes him the top-ranked American man in the event over the course of the Olympic Trials qualification period which ran from November 28, 2018 – May 30, 2021.

While Finke will be gunning for gold, he won’t be doing so without fierce competition from USA’s most recent representatives in the event at the World Swimming Championships. In 2019 Jordan Wilimovsky and Zane Grothe swam the 1500 free at World Championships but neither advanced past the heats as Wilimovsky posted a 14:59.94 for 11th and Grothe was a 15:21.43 for 26th.

While that marks Wilimovsky’s quickest time over the past few seasons, Grothe was actually much quicker when he swam the event at 2019 US Summer Nationals where he notched a 14:56.10. So far this season Grothe and Wilimovsky are right behind Finke in the US rankings holding a 15:10.29 and 15:10.44, respectively, to Finke’s 15:09.14. It seems likely that 2 of those 3 will finish in the top 2 but we’ll have to wait another few weeks before finding out who gets left out.

As for our pick, Wilimovsky will get the upper hand due to his experience on the US and international scene and consistent ability to post nation-leading sub-15:00 swim nearly every year since 2014. At 2016 Trials he swam a blistering 14:49.19 to make the team and was even faster the Games with a 14:45.03 to place 4th overall. While he hasn’t been there yet this season, Wilimovsky will show up tapered, rested, and ready to race.

While the top 3 look strong, there are a couple of names that could definitely work their way into the top 2. One such man is Michael Brinegar who currently holds the 4th fastest time in the country this season at a 15:12.98 from the 2021 Speedo Grand Challenge. He’ll need to shave some time off his current PB of 15:00.82 in order to enter into consideration but considering his proximity to the field thus far in the season cannot yet be counted out.

Also with some national team experience, Arik Katz will enter Trials with a distant season-best of 15:35.56 from last month which is 30 seconds slower than his best-ever swim of 15:05.93 from 2019 and swam a 15:10.94 back in March 2020. Katz also swam the event for the USA at the 2019 World Junior Swimming Championships and nearly wound up with a podium finish, swimming a 15:07.68 for 5th place which was just over 2 seconds slower than Ilia Sibirtsev‘s 15:05.17 for third. While Katz hasn’t performed an Olympic-qualifying-caliber swim yet this season, it will be interesting to see if he can get back down to where he’s been in years past.

Jake Mitchell is another swimmer with international experience with the USA. While he sits a little bit outside of the leading group of men heading into Trials, he is a solid contender to make his way to the A final. Mitchell joined Katz at the 2019 World Junior Swimming Championships but wasn’t quite as quick, hitting a 15:16.28 for 7th. Mitchell’s PB is a little quicker than that at a 15:11.52 which he swam a US Nationals back in 2019.

Jake Magahey doesn’t have much long course 1500 freestyle experience but does hold a 15:24.39 PB from back in 2018. Since that swim, however, Magahey has lowered his short course yard 1650 freestyle time from a 14:52.85 to a 14:24.96 which he used to win silver behind Finke at 2021 SEC Championships. Magahey is qualified to race the event at Wave II of Olympic Trials and if he decides to enter could use his recent momentum to deliver a major PB and shake up the event rankings.

* Magahey, Knowles, and Mitchell haven’t raced the 1500 long course this season but have been active this season in other events.

Wave I Standout: Joshua Brown is heading into Wave I as top seed in the 1500 freestyle. The high school senior and Notre Dame commit posted a 15:36.24 in February 2021 which was more than half a minute off his best time of 16:29.39 from the previous year. As many juniors have done in the part, Brown will just need to fend off the competition at Wave I before heading to Wave II, and should he tap into the PB-producing speed he saw back in February could be due for another solid improvement.

This is what we need

Magahey could drop a **** ton and make someone pissed.

Eric knowles was 24th at NCAAs not 8th

Surprise entry from Michael Andrew, in a statement he said “Since building up my volume to prepare for the final 50 of the IM, I’ve discovered a deep love for proper long distance freestyle. In fact I’ve been secretly training with Bobby in Gainesville and have been grinding through a great 50-1000 pyramid set twice weekly. Viva the animal lane!”

True Sweetser retired earlier this spring to join my (Lil Mosey’s) legal defense team. With his expertise and guidance I posted bail and can continue making sick beats for the boys to bop to this summer.

On a serious note True had a great career and is one of the best athletes and people in this sport. He trained like few others could and has an incredibly bright future outside of the water. At the end of the day he’ll be known for much, much more than bodying and absolutely mentally destroying Bobby Finke on the back half of the 1500 at 2017 nationals. Woj reported that Finke got out of that race and said “wow Nicholas, how much… Read more »

Just needs a quick edit and put Magahey in 5th.