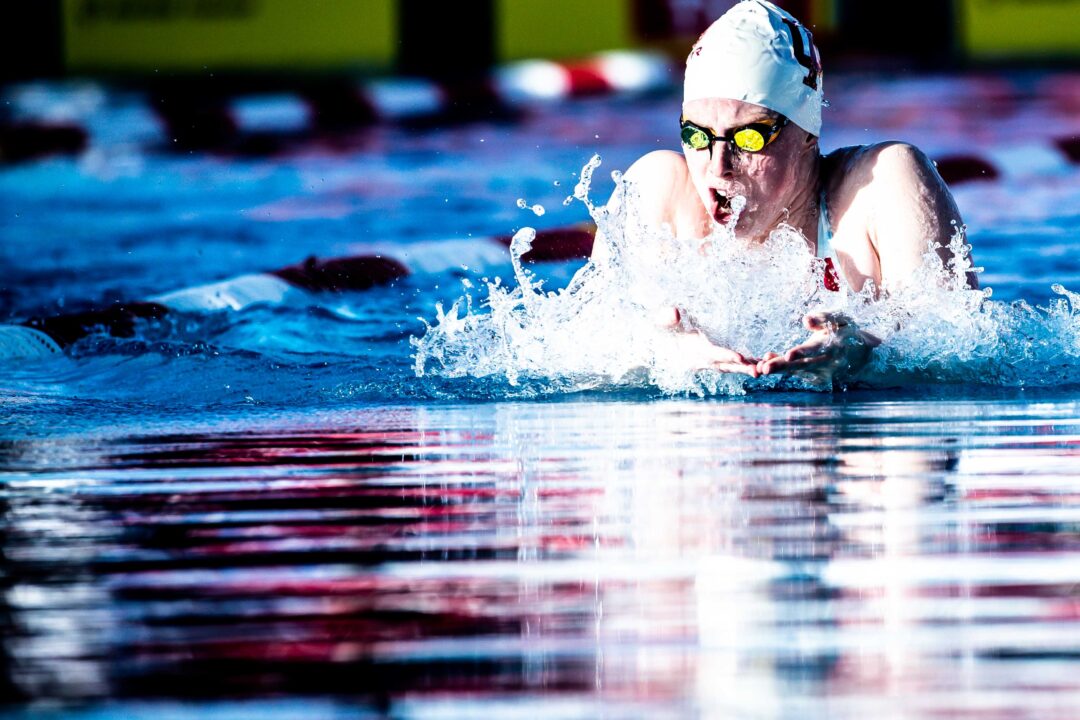 The Lilly King has yet to win a major international title in the 200 breast, despite winning the 2016 Trials final and 2017 U.S. national title. Stock photo via Jack Spitser/Spitser Photography

Okay, we all know that Lilly King can sprint breaststroke. She is the defending Olympic champion in the 100 breast, two-time defending World champion in both the 50/100 breast, and not too mention the current 100 breast world record-holder. But what’s missing from the list? The 200 breast. The only major international medal King has earned in the 200 breast was at the 2018 Pan Pacs, where she took silver to 2012 Olympian Micah Sumrall after winning gold in her signature 100 breast event. Since Rebecca Soni‘s 2012 Olympic title, only Sumrall has been able to top a major international 200 breast final.

Before Sumrall’s 2018 Pan Pacs title, she took bronze in the 2013 World event final and silver in 2015. At the 2016 U.S. Olympic Trials, King (2:24.03) won the 200 breast final alongside runner-up Molly Hannis (2:24.39) while Sumrall finished a devastating 4th place in the final, missing out on returning to the Olympics after a valiant 5th place finish in London. While neither King nor Hannis advanced to the Olympic final in Rio, King did walk away with her two Olympic golds from the 100 breast and 400 medley relay.

In between the 2018-2019 season, up-and-coming comeback swimmer Annie Lazor put up a raving 2:20.77 at the 2019 Pro Swim Series in Bloomington, besting King’s lifetime best. King owns a lifetime best of 2:21.39 from the first stop of the 2019 FINA Champions Series, also held in Indy. At the 2019 World Championships in Gwangju, King looked sharp during the event prelims, but wound up being disqualified for a mid-race infraction. As for 2018 national champion Sumrall, the veteran was only able to manage 11th in the semi-finals at 2:25.41.

The most recent national gathering (with all heavy contenders present), the 2019 U.S. Open, was the checkpoint entering the then-2020 U.S. Olympic Trials meet. At the halfway point of the final, King had a narrow edge on Emily Escobedo, until the sprinter slowed as Escobedo built a slight lead. Escobedo upset King in a U.S. Open meet record of 2:22.00 while King settled for second at 2:22.63.

In the SCY pool, King went undefeated in both the 100-yard and 200-yard breast all four years at the Big Ten and NCAA Championships. Likewise, with the Cali Condors, King went 9-1 in breast event wins during ISL season two. Alas, the Olympic pool is in long course meters. The US women’s 200 breast has been in need of someone to fill Soni’s sub-2:20 shoes since 2012, and King is certainly more than capable of taking the role. The question is: can King translate her past short course racing successes into the major (inter)national long course competition pool?

Dark Horse Threat: Lydia Jacoby (15th seed, 2:27.39) — You probably saw this one coming, but this Alaskan teen is going to change things up in the breaststroke game, whether it’s the 100 or 200 breast. Entering Omaha, Jacoby has a serious chance of qualifying for Olympics in the 100 breast. However, if things work in her favor or the other, she still could make some noise in this event. Jacoby’s stroke looks similar to Aussie legend’s Leisel Jones, utilizing a natural stroke to create lethal underwater propulsion with a shallow pull and low head/elbow positions. At PSS Mission Viejo, Jacoby split 1:11.35 on her first 100 before swimming 38.85/37.19 on the back-half. If Jacoby swam at the 2019 U.S. Open, she would have placed 5th (beating Sumrall) and had the 4th-best finishing 50 (Lazor 35.97, King 35.99, Escobedo 36.13). Swimming against a competitive field like in the 100, she could very well keep up with a 1:10 pace before she turns on her consistent finishing speed. Again, Lydia Jacoby, remember the name.

Yes! The great Lilly will reign as KING of the castle!

LOL at the tease in the entire article only to predict her as 3rd place.

King and Escobedo shut out Lazor by .01