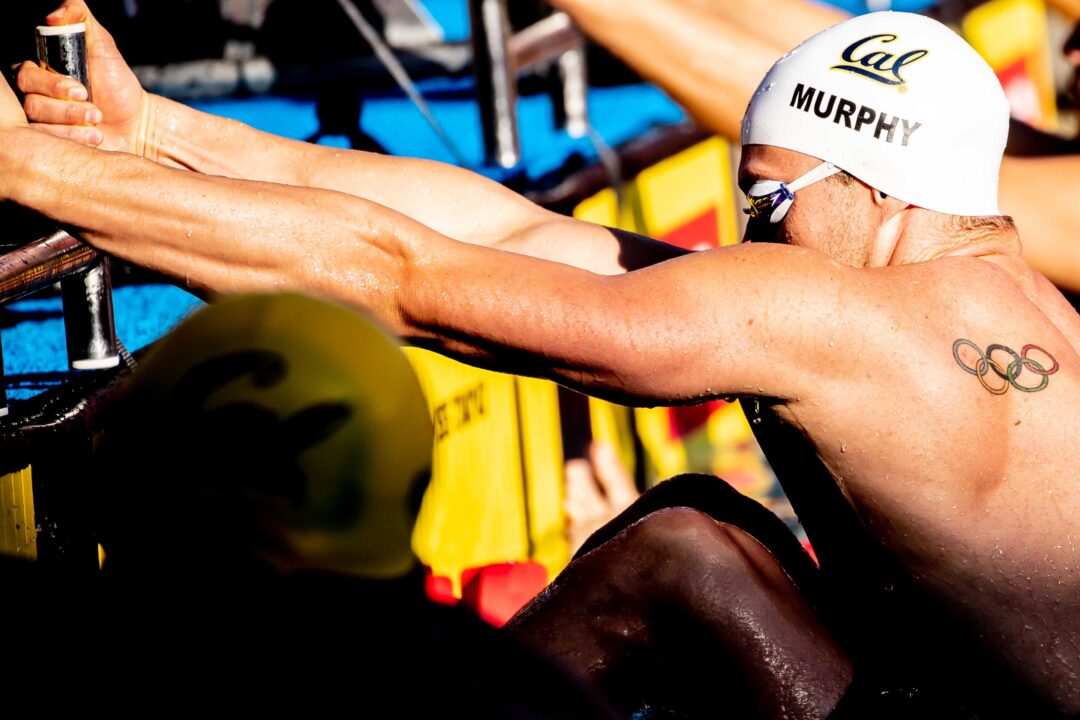 Olympic champion Ryan Murphy leads a tight field in the men’s 200 backstroke, where the battle for the second spot is tight between 3 swimmers. Archive photo via Jack Spitser/Spitser Photography

Although not as loaded as the 100 backstroke, the men’s 200 backstroke will be one of the most tightly contested events at Olympic Trials, with a slew of swimmers seeded within range of earning an Olympic berth.

In 2016, Cal alumnus Ryan Murphy exploded to sweep the backstroke events at Olympic Trials, posting a time of 1:53.95 in the longer of the two distances to claim his first Olympic team berth. In Rio, Murphy defeated reigning world champion Mitch Larkin of Australia to claim the gold medal, touching in a time of 1:53.62.

Although he has struggled in the pool since then, falling to a silver medal finish in the event at both the 2017 and 2019 World Championships, Murphy is still the man to beat in both backstroke distances. At the 2018 Pan Pacific Championships, Murphy won the gold medal with a time of 1:53.57, which ranks him as the fastest American since the end of the Rio Olympics by over a second, bettering the time that won him the Olympic title in 2016.

This is one of the few events where the US has a high chance of sending the same two swimmers to Tokyo that they sent to Rio, as Murphy’s former Cal teammate Jacob Pebley is also in a prime position to make a run for his second Olympic Games. Pebley swam to a time of 1:54.77 at the 2016 Trials meet before finishing 5th in Rio with a time of 1:55.52. However, Pebley has been as fast as 1:54.78 since Rio, which he swam en route to a bronze medal at the 2017 World Championships. Pebley has not raced since the 2020 ISL season, so there is little to base his performances on except for his previous results.

The biggest threats to the Cal duo are Texas A&M standout Shaine Casas and Texas Longhorn Austin Katz, both of whom have been ranked amongst the top Americans for the past few seasons. Katz has a large amount of international racing experience, having represented the US at the 2017 and 2019 World University Games, in addition to being a member of the 2018 Pan Pacific Championship team. At the 2019 World University Games, Katz won the gold medal, swimming a best time of 1:55.79 during the competition, which ranks him 2nd amongst Americans since 2018. In contrast, Casas has never represented the US internationally, but the Aggie is coming off of a strong NCAA season, which saw him claim multiple NCAA titles and swim the 2nd-fastest 200 yard backstroke time in history. Casas recently put up a time of 1:56.81 in the 200 backstroke at the Longhorn Elite Invite, which currently ranks him 2nd in the country this season, only behind Murphy. With his recent trajectory, it is likely that Casas has some extra time left to drop in the long course pool.

Florida Gator Clark Beach also represented the US at the 2019 World University Games in the event, where he finished 3rd overall in a time of 1:57.96. Beach holds a best time of 1:57.06, which would put him in strong contention for an Olympic team spot. Likewise, Nicholas Alexander has not hit his best time in the event since 2018, but currently ranks as the 6th fastest American since 2018 in the event with his personal best of 1:57.18.

22-year-old Bryce Mefford nearly matched his best time in the event during the 2021 Atlanta Classic, swimming a time of 1:58.16 during finals. As the 7th ranked American since 2018, Medford could be a threat to make the final at Olympic Trials, especially given his recent performances.

At NCAAs, Cal freshman Destin Lasco finished 2nd to Casas, throwing down a historical time of 1:35.99, ranking him as the 3rd fastest performer of all time. Lasco only holds a personal best of 2:00.91 from last month, which isn’t even under the Wave II cut. However, given his short course performances, Lasco could very easily sneak into the top 8, especially considering that he most likely was not tapered when he swam his best time.

Other potential finalists also include 2019 Pan American Games Champion Daniel Carr and Harvard standout Will Grant. Carr and Grant both currently rank in the top 10 in the country for the season. Carr holds a best time of 1:57.69 from 2018, which currently ranks him just outside of the top 8 Americans since 2018. With his international racing experience, Carr could contend for a spot alongside his former cal teammates Pebley and Murphy, potentially challenging them. Grant represented the US at the 2019 World Junior Championships, and currently holds a best time of 1:59,41 that he just set at the most recent edition of the Pro Swim Series.

If he elects to swim the event, Carson Foster could also challenge for a spot in finals. Foster holds a best time of 1:57.70 that he set at 2018 Nationals. Given his recent progression in short course, it is likely that Foster could be faster at trials. However, the 200 backstroke and 200 IM fall during the same session at Olympic Trials, and Foster is expected to be amongst the top contenders for an Olympic spot in both IM events.

Wave I Standout: Colby Mefford, Cal Aquatics (lifetime-/season-best: 2:02.01 / N/A). Backstroking powerhouse Cal has five of our top 8 picks in this event, so let’s keep things going with yet another Golden Bear. The younger Mefford brother dropped 1.2 seconds from his lifetime-best 200-yard back during the college season, and came about a half-second from breaking the 1:40 barrier. He hasn’t logged a long course 200 back yet this season, but appears very due to drop from his 2019 career-best of 2:02.01 in long course meters. For reference, Mefford has dropped from about 1:44.4 to 1:40.5 in yards since his lifetime-best in meters.

I *expect* a tight battle for 2nd between Katz, Casas and Pebley (if he’s in form), I would not be surprised if one of either Katz or Casas has a real pop off and is up there battling with Murphy. Any of the other Cal guys getting up there doesn’t seem too far fetched to me either.

Battle for second?
Murphy is not locked for first place.

If he goes a 1:53 anything he’ll make the team, at the last 2 world’s he has been far and away the 2nd best 200 backstroker in the world behind Rylov. He has also been right on his times from when he was going into trials in 2016 so I see 52-low and 1:53 being very likely

“The race for 2nd”? Don’t Jinx anybody!! Sometimes the defending gold medalist and fastest in the world comes in 3rd place (right, Mel?).

why hasn’t Pebley been racing this year?

He swam at a San Diego Swimming 13&O meet

56.2 in the 100 back in your only racing of the year isn’t exactly encouraging

Where has Pebley been?

He swam at an SI meet

Shaine is the man!

Is Pebley going to trials?