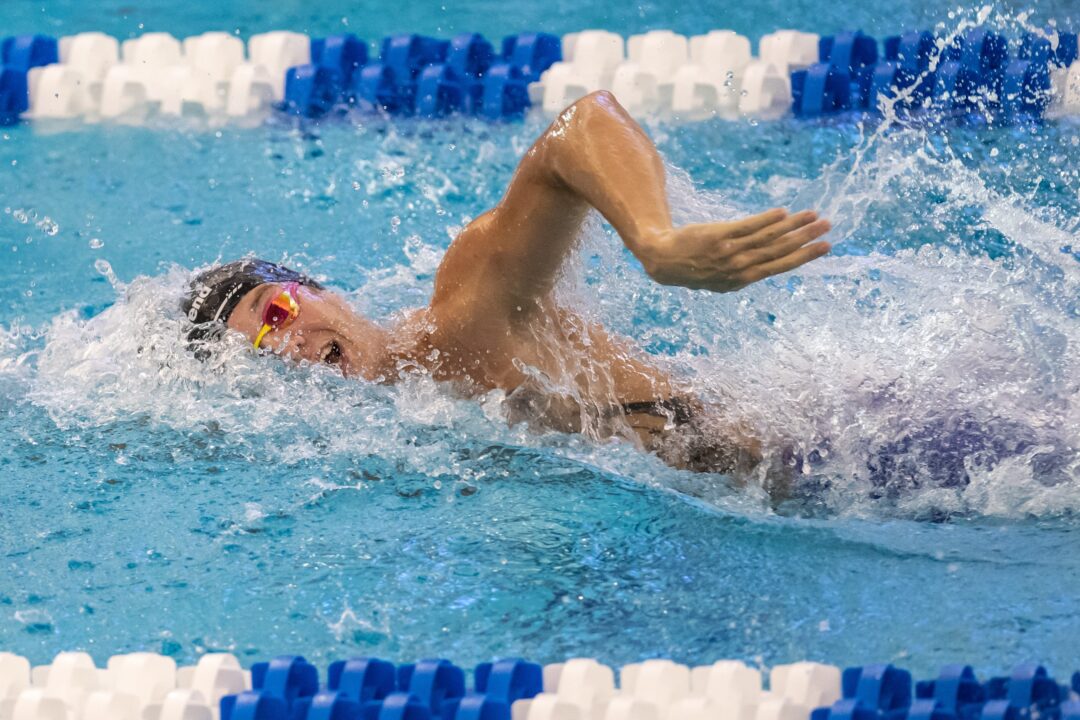 The last finals session of the 2021 Men’s NCAA Championships is 90 minutes away from beginning at the Greensboro Aquatic Center. On the slate tonight will be the fastest-seeded 1650 free heat followed by the consolation and championship finals of the 200 back, 100 free, 200 breast, 200 fly, and the 400 free relay. After Cal held the lead for two days, Texas took over the top team spot immediately after the 400 IM yesterday and will enter Saturday night’s session as the current leader. Here’s an event breakdown of the races to keep an eye on for the evening.

The first four mile heats began at 3:10pm E.T., led by heat one top seed Mikey Calvillo of Indiana. Cal distance ace Sean Grieshop leads heat two while UNLV’s Vuk Celic will swim in lane four of the following heat. Then, Greg Reed of Georgia and Brooks Fail of Arizona will lead the fourth heat before the fastest-seeded heat kicks off tonight’s finals session. Fail broke 4:10 for the first time in the 500 free on Thursday, placing third in the final.

Tying for 8th place in prelims were Florida’s Clark Beach and Virginia’s Justin Grender, which resulted in Beach beating out Grendner for the A-final spot. Gredner will lead the consolation final over Mizzou’s Jack Dahlgren and Indiana’s Jacob Steele.

Accompanying Beach in the championship final will be Cal freshman Destin Lasco, who broke the 200 back pool record and NCAA freshman record this morning. After winning the 200 IM and 100 back thus far, Texas A&M’s Shaine Casas will be aiming for a perfect 3-for-3 title sweep along with sweeping the backstroke events. Cal Bears Daniel Carr and Bryce Mefford will accompany Lasco in the final while Texas senior Austin Katz will join freshman teammate Carson Foster for the Longhorns.

Freshmen Youssef Ramadan of Virginia Tech (42.09) and Matt Brownstead of Virginia (42.20) will have an ACC duel in the consolation final of the 100 free. Keep an eye on #15 seed Pittsburgh’s Blaise Vera, who gained two-tenths off his seed time of 42.21 following his 3rd-fastest 50 fly relay split in history yesterday.

Cal senior Ryan Hoffer will also contend for his third NCAA title of the meet with his 40.90 pool record this morning, minting himself as the 4th-fastest American all-time. Texas Longhorns Drew Kibler and Daniel Krueger swam the top-3 fastest swims of the morning behind Hoffer while freshman Bjorn Seeliger will accompany his Cal teammate. Both pairs have the potential to earn an 1-2 finish for their respective teams, which is worth 37 points.

Into the championship final, Cal’s Reece Whitley broke the Greensboro pool record this morning with the only sub-1:50 swim of the event. Looming in second place this morning was yesterday’s 100 breast champion Max McHugh of Minnesota. McHugh owns a lifetime best of 1:49.41 as a freshman while Whitley’s lifetime best rests at 1:48.53, both under Whitley’s morning pool record. Senior teammate Hugo Gonzalez will join Whitley in the A-final while Texas’ Caspar Corbeau will represent the Longhorns.

Indiana’s Tomer Frankel sliced two seconds off his seed time to lead the consolation 200 fly final at 1:41.73 over Mizzou’s Danny Kovac (1:41.89). Texas senior #15 seed Alvin Jiang placed top five in the 100 fly yesterday, and could challenge Frankel and Kovac with his 1:41.60 seed time. Kovac, however, has the fastest seed in the consolatio final at 1:41.24.

A mere five one-hundredths of a second separate top seed Nicolas Albiero of Louisville (1:39.61) and Trenton Julian of Cal (1:39.66). At the 2019 NCAA Championships, Albiero placed 4th in the final while Julian finished 6th. Both Albiero and Julian will be duking it out for their first individual NCAA titles. Georgia’s Luca Urlando and Camden Murphy will represent the Bulldogs in the top final while Texas’ Sam Pomajevich will rep the Longhorns.

There will be five heats of the 400 free relay timed finals following the finals of the platform diving event, where Texas senior Jordan Windle will aim for a second diving title in Greensboro after leading prelims this morning.

Swimming in the middle lanes of the fourth heat of the 400 free relay will be Cal and Florida, who are currently running 2nd and 3rd respectively in the team standings. In the final heat, NC State (2:48.19) and Alabama (2:48.22) have the middle lanes with their top two seeds alongside 200 medley relay champion Louisville and current team race leader Texas.

and the light of the Tower at night, she touches those plains a brighter shade of burnt orange.

Is the last heat of the mile swum with finals?

Grieshop and Kopp did not do what they needed to in the mile today. That is going to sting for Cal

Kopp was likely tapered for Pacs, based on his other swims. Think Grieshop should score.

Grieshop leads the 1650 heats after posting a 14:48.98. Should score somewhere in the B-final range.