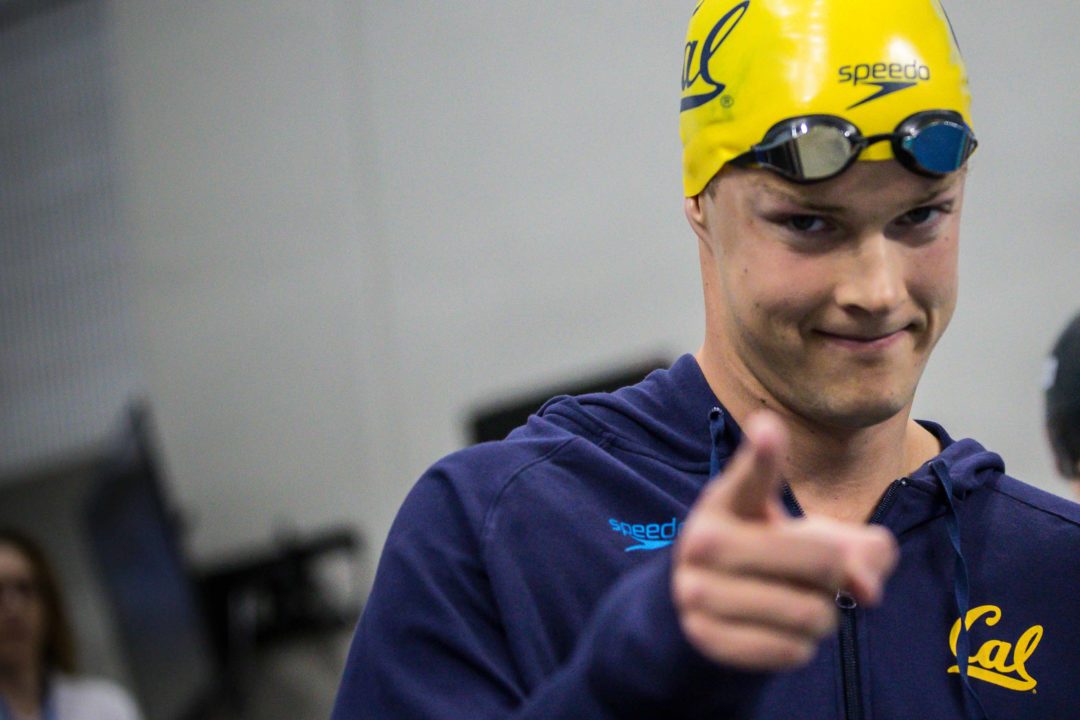 On paper, it'll be Cal and Texas dueling it out in the 400 free relay while simultaneously aiming to wrap up a team title. Current photo via Jack Spitser/Spitser Photography

(Optional) pop quiz: Which teams have won a 400 free relay title since the last time the Cal Bears last did?

A better question might be when was the last time Cal won, but we already kind of gave that away in the headline. Cal last won in 2011, and since then four teams have won titles, two of which may be pretty obvious, but two of which may surprise a few of our newer readers.

The NC State Wolfpack is one of those four schools to have won in the last decade, having won this event in 2016 and 2018. They hold the fastest time in the nation this year with a 2:48.19, the time that earned them the title in this event at ACCs. That relay featured freshman Luke Miller leading off in a lifetime best 42.52, followed by Hunter Tapp (41.66), Giovanni Izzo (42.06), and Kacper Stokowski (41.95). The Wolfpack always seem to leave a little more in the tank for NCAAs, and while this relay doesn’t quite have the same star power it did a couple years ago, it wouldn’t be much of a surprise to see the quartet shaved a few tenths each off of their time and drop into the 2:47 or even 2:46 range.

Alabama won SECs last month with a time of 2:48.22, which puts them 2nd in the nation. Freshman Matt King led off in 41.73, in line with his individual time of 41.66 earlier in that session, but Sam DiSette (42.63), Jonathan Berneburg (41.85), and Colton Stogner (42.01) all swam substantially faster than they did individually, as each was over 43 in the individual finals. The Alabama women won this event at NCAAs by dropping exactly half a second off of their seed time. Even if the men are able to able to duplicate that feet, even a half a second drop probably isn’t going to be enough to get them past what some of the teams further down the psych sheet are likely to do, but they should be solidly in the middle of the top 8.

The Louisville men narrowly took 2nd at ACCs with a 2:48.37, giving them exactly the margin they needed to beat NC State for the overall title. Haridi Sameh led off in 42.03, shaving a few hundredths off of his individual time, Nick Albiero split 41.71, and Michael Eastman and Tanner Cummings, who both have stepped up as key relay swimmers for the Cardinals this year, split 42.35 and 42.28. Each hit 43.0 individually in finals, although Eastman was 42.9 in prelims. In recent years, Louisville has handled the double taper as well as anyone else in the nation, and while there may not be a lot of room to move up, watch for them to at least hold their time.

The defending champions Texas come in with the 4th-fastest time this season, a 2:48.48 from Big 12s. The Longhorns have won this event three times since 2011. When we last saw the Longhorns swim this event at NCAAs, they cobbled together a relay consisting of a freshman, a 200 backstroke champion (John Shebat), a guy who missed scoring in the 100 after being seeded #1 (Tate Jackson), and one of the rangiest freestylers we’ve ever seen (Townley Haas), and threw down the 3rd-fastest time ever in this relay despite knowing that they were going to lose the overall team title to Cal.

That freshman, Daniel Krueger, returns, but otherwise it’ll be a new-look relay for the Longhorns. Krueger tops the 100 free psych sheet with a 41.33 (lifetime best of 41.26), and Drew Kibler, who made the B-final in 2019, has been 41.92 this year. Those seem to be the two locks for this relay. At Big 12s, Jake Sannem (42.43) and Chris Staka (42.24) joined Krueger and Kibler. Sannem had multiple sub-42 splits at the 2019 NCAA Championships, and Staka has been 42.3 individually. Another possibility is Alvin Jiang, who split 41.97 at the Minnesota Invite back in late 2019 and was sub-19 on the 200 free relay at last month’s Big 12 Championships. Realistically, the Longhorns will probably need a 41-low-to-mid from at least one of those three guys in order to win.

The Florida Gators are the only other team to have gone under 2:49 this season, having taken 2nd at SECs with a 2:48.85. All four Gators who made up that relay were on their A-game that day. Kieran Smith led off in a lifetime best 41.91, while Adam Chaney (42.24), Trey Freeman (42.61), and Eric Friese (42.06) all hit lifetime bests earlier in the session in the individual 100 free. Of those three, Chaney’s split essentially matched his 42.20 from prelims, and it seems like it should be a matter of when, not if, not Chaney drops a sub-42 split. Freeman went 43.2./43.3 individually, and Friese went 42.6 twice  , meaning that their relay times were pretty well in line with their flat starts. It seems like Florida went pretty much all-in for SECs, so on paper there doesn’t appear to be a ton of room for a big drop here.

Indiana leads that group with a 2:49.20 that won the Big Ten Championships, highlighted by a 41.76 split from Van Mathias. Ohio State finished just behind Indiana, taking 2nd in 2:49.32, led by a 41.66 by Semuede Andreis. Michigan was just another tick behind those two schools, taking 3rd in 2:49.66.

The Georgia Bulldogs are the lone SEC school with a 2:49 seed time, although that time of 2:49.27 came back in November at the Bulldog Invite. Finally, ACC rivals Virginia and Virginia Tech have been 2:48.84 and 2:49.87, respectively. The Cavaliers’ time came back in November at the UT Invite, while the Hokies’ came from their 3rd-place finish at ACCs. It wouldn’t take much of a jump from any of those three schools to challenge for a spot in the top 8.

It looks like it will come down to Cal v Texas at the top. Hoffer/Seeliger and Kreuger/Kibler seem pretty evenly matched, so it seems likely to come down to whatever the 3rd and 4th legs will do. We’re going to give Texas the slight edge here. But we’ll also note that if the team race is as close as think it might be, there is a decent chance that whichever team is winning heading into the 400 free relay may be more focused on safe relay starts and avoiding the DQ, rather than swimming as fast as possible, and that could alter the outcome.

Hoffer has dipped under 41 once from a flying start, going 40.99 on the anchor leg of the Bears’ winning relay at 2020 PAC 12’s, unshaven with a full beard no less. Wouldn’t be surprised if he pulled out a 40 mid from a flying start on this relay if it’s a close race

That description of the Texas 2019 400F relay is the best thing Ive seen. Swimming’s version of the breakfast club I guess

It’s hard to believe Cal hasn’t won the 400 Free Relay in a decade. Thank you for the stat!

Michigan could surprise, they had VERY safe reactions at Big Tens in order to secure the meet win

by looks of seeds, doesnt look like texas and cal will be in same heat, which could make an interesting race