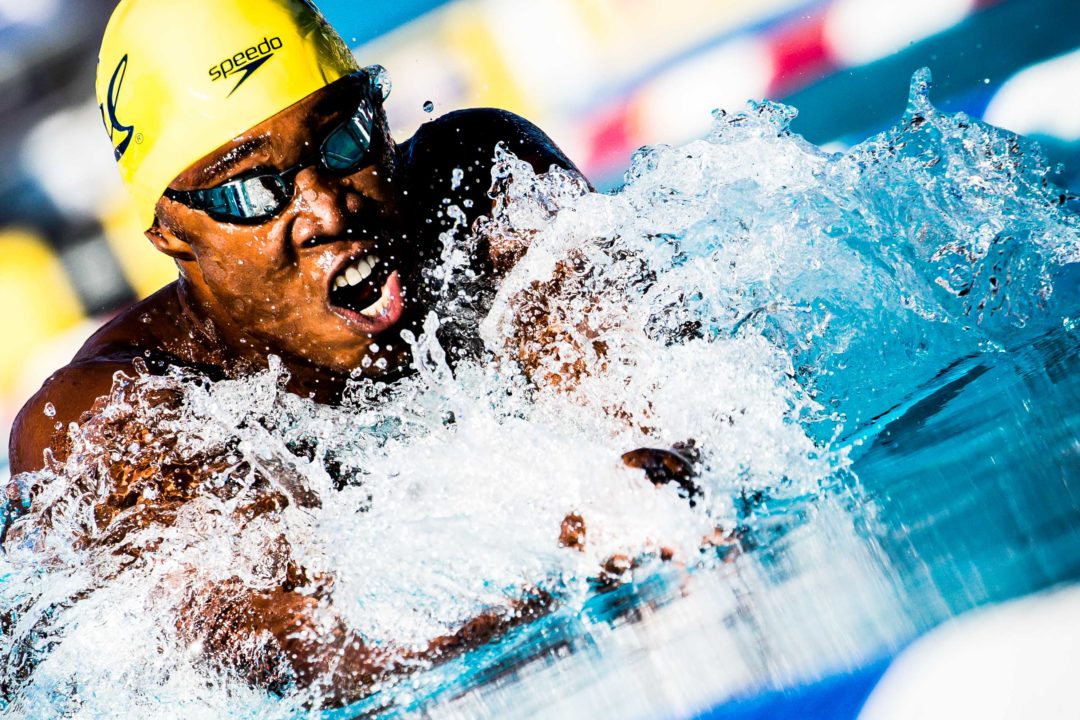 On paper, this looks like a Whitley win and McHugh silver is imminent. But two swimmers have hit big LCM times this year, which could make things close. Current photo via Jack Spitser/Spitser Photography

After cracking the 1:50 barrier last season, Cal junior Reece Whitley has leveled up another step, dropping a nation-leading 1:48.53 in November to become the #2 performer ever. Whitley’s swim is also the third-best performance of all-time, just behind two Will Licon swims.

Whitley’s best breaststroke event has always been the 200, where his tall frame lends itself to a smooth, long stroke that is simply devastating in an endurance stroke race. After finishing fifth in this race as a freshman in 2019, Whitley is the man to beat, with Licon’s record well within striking distance.

The race for second will be tight, with 100 breast favorite Max McHugh of Minnesota looking good at 1:50.93 for the two-seed ahead of three-seed Daniel Roy of Stanford. On paper, this looks like McHugh easily taking second, with a lifetime best of 1:49.41 from the 2019 NCAA Championships. But Roy could make things interesting; his 1:51.07 season-best is only a tenth or so back of McHugh, and Roy went off for a 2:08.89 in long course in November at one of the Stanford-Cal match-ups.

That makes Roy the second-best LCM 200 breaststroker in the field, ahead of even Whitley (but behind another swimmer who we’ll address in a bit), and his time still holds up at #11 in the entire world this season. Roy seems capable of a 1:49, but he could easily go a 1:49 and still take third, so it’ll be close.

Three seniors hold the next three seeds: Louisville’s Evgenii Somov (1:51.26), Ohio State’s Paul Delakis (1:51.78) and Georgia Tech’s Caio Pumputis (1:51.81). Russian-born Somov has won both breaststrokes at the ACC Championships in 2018, 2020 and 2021; his track record is definitely impressive, though he has historically been stronger in the 100 breast, especially at NCAAs. Delakis and Pumputis, meanwhile, were A-finalists in this event in 2019, touching fourth and sixth, respectively. Pumputis also handed Somov his only 200 breast loss at the ACC Champs in 2019.

Cal’s Hugo Gonzalez is not someone to miss, despite being down at 22nd on the psychs. He’s seeded with his 1:53.53 from a time trial at Pac-12s, though he has potential to be roughly two seconds faster, or more. He clocked a 1:51.63 swimming breast during the 200 IM prelims at the 2020 Pac-12 Championships, taking the intentional DQ, and that time would make him #5 in the country this season. If Gonzalez makes the A-final, which he should, that will mean Cal’s strategy paid off; they swapped him into this event from the 200 back, where he’s been under 1:40 this year, since the Bears have five other men seeded in the top 12 in the 200 back.

Texas’s Caspar Corbeau is seeded seventh at 1:52.52, and he’s actually the best long course 200 breaststroker in the event. Corbeau swam a huge 2:08.57 at an Olympic qualifier in the Netherlands in December, which was his first time under 2:10. His lifetime best is a 1:52.06 from the mid-season invite in 2019, during his freshman year, so he seems on the precipice of a decent drop.

This will be Corbeau’s first NCAAs, as it will be for sophomores AJ Pouch of Virginia Tech, the eight-seed at 1:52.60, and Andres Puente of Texas A&M, the 10-seed at 1:52.74. It’ll also be the first for junior Lyubomir Epitropov of Tennessee, who is seeded ninth at 1:52.69. Epitropov transferred to Tennessee from East Carolina after that program folded, and he’s gone by the 1:53 second mark altogether after coming to Knoxville with a best of 1:54.32.

It’ll also be the first NCAA meet for Pitt junior Cooper van der Laan, the Australian native, and Virginia freshman Noah Nichols, the highest-seeded rookie. Van der Laan sits at the #11 seed with a 1:52.76, a big improvement after he hadn’t broken 1:55 before this season. Nichols sits 14th with a 1:52.98, and he’s cut his best way down from a 1:58.09 in high school; that pre-college best is from just over a year ago.

I think Reece will take this but huge respect to my man Daniel Roy for going up against guys that are nearly a foot taller(or in Whitley’s case, over a foot taller) and still often winning. #shortkingsriseup <3

the only event he REALLY excelled in this season was the 200 back and he is not even swimming it at NCAAs. Don’t get me wrong, the dude is fast but to project him at a top 8 finish in this event is a bit of a stretch. Now I understand that “he may have just been waiting for NCAAs” which may be a valid argument… Read more »

yeah we were KINDA talking about Hugo…

Somehow a 2:08 LC doesn’t qualify you automatically for the Neth Olympic team, 1:50.00 incoming!

Yeah, super rough. Though he should have another shot at making the team next month at another qualifier.

He will not swim in Eindhoven next month. Last and final chance is at European Champs in Budapest in May.