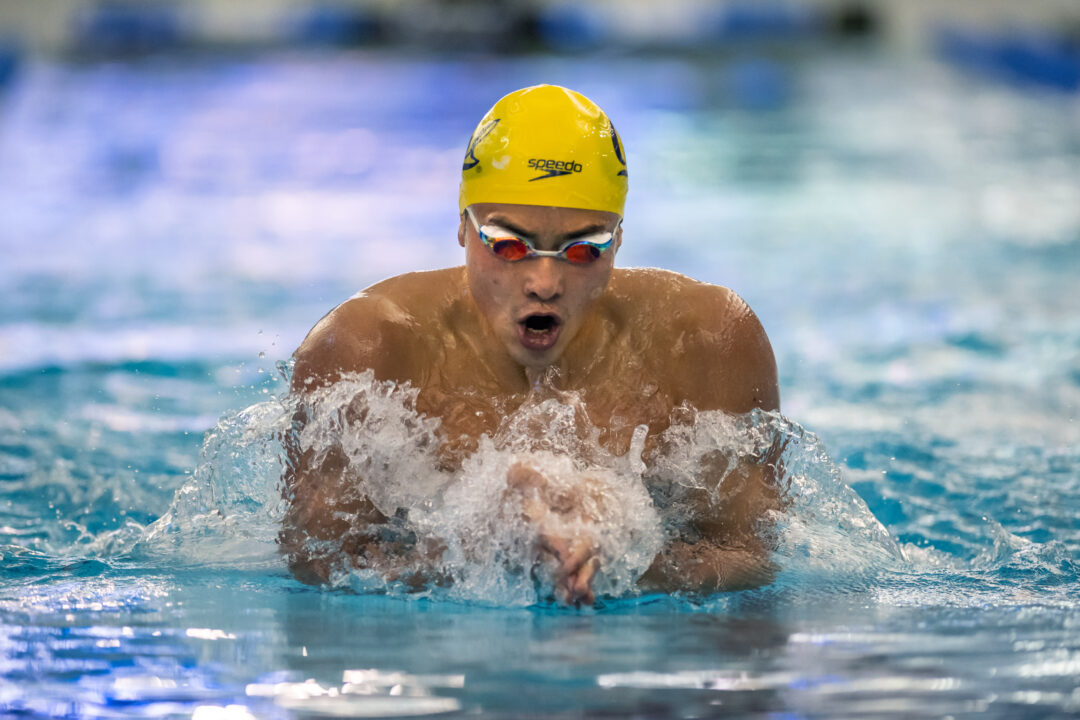 Carson Foster or Luca Urlando? It was an agonizing choice for #1 recruit. But after one year... it's Destin Lasco leading individual scoring. Current photo via Luke Jamroz Photography ©

We’ve already done a deep dive into our recruiting archives, looking at how the top 20 recruits from the high school class of 2017 did after four NCAA seasons. Now it’s time to look back at a more recent recruit ranking: the current year’s freshmen, the first class we officially scouted from their sophomore years through their senior seasons of high school:

How I look at is that only 5/26 of the top ranked swimmers couldnt qualify. The rest did and 2 redshirted and one TX kid was left out. Only 2 unranked kids scored which is slim pickens. They guys need two more years to be fairly evaluated but I think its started out really strong. I am mostly interested to see what the Stanford guys do and then for this years class the NC state guys.

Hard to figure out how to compare Urlando to Foster and Lasco since Georgia chose to swim him in 2 individual events, and include him on all 5 relays. Given his drop in the 2 fly, it is likely he would have scored some points in the 2 IM. And his 44.9 backstroke leg could have had him scoring points there too (though a tough double with the 100 fly).

Probably still behind Lasco and Foster, but perhaps even with Magahey in individual points….

Luca is a stud in my book. Stepped up to help the team wherever they needed him. He also has had some shoulder issues we don’t really know if it is impacting him right now.

Wyatt Davis should have scored more. He was a 1:44 IMer – that worked out a lot better for Lasco than trying the 200 fr/100 bk double.

Michigan men got shut down for two weeks leading into both Fall taper and Spring taper. That is the number one cause of the NCAA performance troubles for Wyatt and Jake… and the rest of M team.

The women dealt with the same shutdown and still performed well at NCs. Outside of the Michigan distance crew it’s really standard for their men to be slower at NCs than at B1G championships. Even the year they won and we’re the favorites coming into the meet, many of their men added time.

I have no doubt Wyatt and Jake will do great things at future NC meets… not to mention others who were seeded much higher (eg Will Chan, River Wright, …) and were unable to repeat their peak times from two weeks earlier.

The women swam B1G a week before the men and didn’t swim great at B1Gs. they had a week less after the mandatory 2 week university wide Covid shutdown to somehow pull off that taper. It def hurt them at B1Gs…

The men had an extra week after the Covid shutdown to prepare before B1G and crushed B1Gs; but only 2 weeks after B1G before NCs. The effects of the forced Covid shutdown at the university absolutely affected… Read more »

0
0
Reply
So confused
Reply to  #MFan

Stanford had multiple Covid positives in the weeks leading up to PAC-12 and that skewed the results. Two weeks out of the water and stuck in a dorm room at that point is a lifetime.

A better way to do this would be to sort and rank the swimmers by points scored and then show the recruit rank instead of ordering by recruit rank. Then we can all see how SwimSwam predictions performed.

For example, SwimSwam miss on Forst/Johnston/King on the upside and Davis/Mitchell/Maurer/Mihm/Frazier/Dang/Affeld/Faikish/Christianson/Conley on the downside.

Overall, SwimSwam hit on 10 of 23 listed names, excluding redshirts and the roster scratch.

but that is not the point of this exercise, sir.

Hey Swimswam – good on you for doing this introspection. Kudos. Think how refreshing it’d be if NFL GMs who burned first round picks for failed QBs were introspective.

and, oh yea , what Fletch said. Show your prev rank would be… Read more »

Johnston really not surprising that he outscored many of the other similarly ranked recruits. He was always going to score as a freshman in the mile.

Development in the 400 IM was big time though.

For a more fair picture I would like to see which of the sprint oriented recruits swam on scoring relays. I imagine those will score more individually in the coming years.