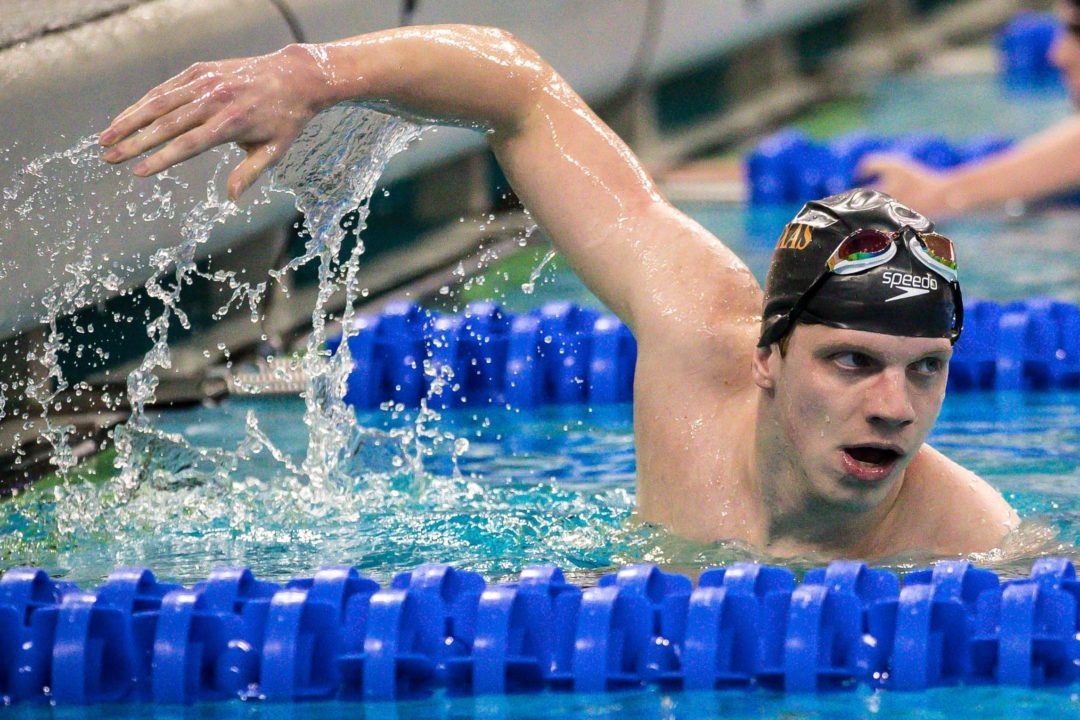 Just how close did #1 Andrew Seliskar and #2 Townley Haas end up over their careers? And you might be shocked to know just how many developmental sprint talents flourished from outside our top 20 ranks in the boy's high school class of 2015. Archive photo via Jack Spitser/Spitser Photography

As we do each year, we’ll look back at the high school class of 2014, which just finished four years of college eligibility this spring.

Check out this post for our analysis of the top 10 recruits in the high school class of 2015. Bear in mind that this was posted in July of 2014, when these swimmers were high school juniors. Complaining about slighted swimmers is barely a scrap above useless at the time of posting, and putting on Captain Hindsight goggles and complaining now without looking up best times from July 2014 is even less enlightening than that.

Other Impactful Recruits in the High School Recruiting Class of 2015

Top 10 Individual Scorers In the Class:

Shebat is amazing. Keeps getting better and better. 🤘🏻

Just like Conger. Waited till the last possible race to win his first title.

Unlike Conger, he was a completely unknown recruit going into his senior year of HS. I remember hearing some story about his mom having to convince Eddie to take a look at him.

Any mom would do that. Hmmmm make a phone call or get up and go to work every day. No brainer.

Great indicator on what schools not to go to…

Is it? I can’t tell if this is sarcasm.

It’s no surprise why Cal and Tex finish 1-2 every year with their top notch recruits every year. Kudos to Indy, NC State, and Louisville for developing their swimmers and competing on the national stage.

I think what Conger does in the next year and half will be a good test to this.

Conger was national high school swimmer of the year. I think he was pretty good before going to Texas. I think most would agree.

Shebat was ranked #32 by College Swimming. Not exactly a diamond in the ruff. Try again.

Yep, you’re right. Canadian. Moved him to the correct list. Thanks!

Is it true Shebat was a walk on?

Will Harty be eligible to swim again next year with his redshirt?

On the top individual scorers list, #1, #2, and one of the people tied for #3 all are from Virginia.

Even better, Seliskar and Shebat swam for the same coach at NCAP: John Flanagan