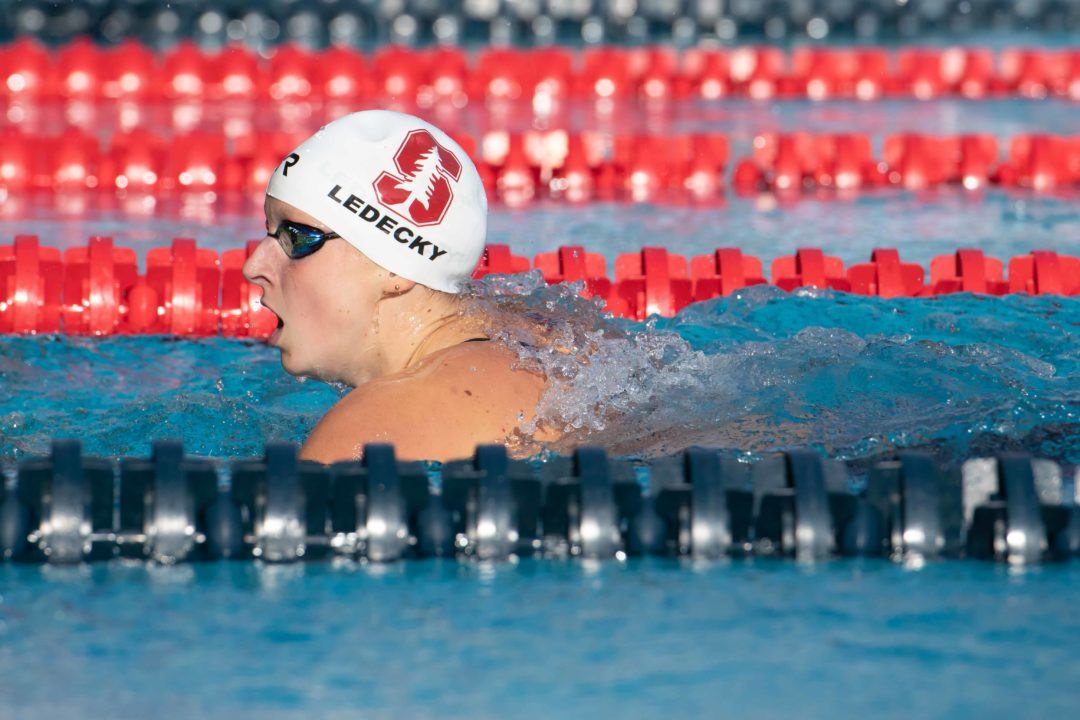 A loaded women's high school class of 2015 featured four 2016 U.S. Olympians and several more 2020 frontrunners. But who turned out to be the highest-scoring athlete in NCAA competition? Archive photo via Mike Lewis/Ola Vista Photography

As we do each year, we’ll look back at the high school class of 2014, which just finished four years of college eligibility this spring.

Check out this post for our analysis of the top 10 recruits in the high school class of 2015. Bear in mind that this was posted in July of 2014, when these swimmers were high school juniors. Complaining about slighted swimmers is barely a scrap above useless at the time of posting, and putting on Captain Hindsight goggles and complaining now without looking up best times from July 2014 is even less enlightening than that.

Other Impactful Recruits in the High School Recruiting Class of 2015

All Individual Scorers In the Class:

Stay tuned this week for similar analysis of our graduating men’s senior class, as well as quick looks at the current year’s freshmen classes and the overall recruiting classes team-by-team.

Ledecky not the best and ranked #7 ?!?!? Just kidding, I know it was because she only did 2 years. Interesting that Weitzeil is only at 106 points and #10 on the list. Even if she wins all 3 events next year, that would still put her 4th on the list, and I know that relay contributions are not factored in at all.

thank you for putting this together each season!

What about divers? You obviously didn’t rank them ahead of time, but would be interesting to see where they rank in this class.

Are you guys going to do an article on how the class of 2018 did as first years? Which top 20 freshman scored big other than Ruck, Ivey and Alons?

Curious about Ivey — assume she’ll be included in a look of first-year swimmers since she swam conference/NCAA, but will she also be included in the ranking of this year’s recruiting classes (when that comes out), since she was originally a c/o 2019 high school graduate?

One of the most amazing and underrated breakouts of this class in my opinion is Catie Deloof. When she committed to Michigan her best freestyle times were 23.60/50.10/1:52.78 which she dropped down to 21.88/47.47/1:42.55. She didn’t really manage to perform at NCAAs until her senior year (she didn’t actually make the meet until her junior year) but she had an amazing senior season and was a key part of Michigan placing third this year.

I believe Kirsten Vose has one more year. Missed a year because of injury. And usc website says she’s a junior.

Same with Miranda Tucker, as the article says. It’s better to evaluate everyone with their HS graduation class rather than waiting an extra year due to recency. “Remember everyone who finished NCAAs last year? We’re going to evaluate them now” doesn’t work as well.

And I agree with that. My point was that they first said she had finished her career but it looks like Jared or someone fixed that.

Was Pickrem really International, or just unranked? Pretty sure her high school swimming was done in Florida when she was swimmng with Randy Reese.

She was swimming in Florida between 2003-2015, so I would say she should be considered a HS swimmer from the US even though she represents Canada for international meets.

Awesome to include about Comerford. Story of true hard work that should inspire many high school athletes. You don’t have to be ranked top 20 coming out of high school to make a huge impact!!

Her progression has been insane!