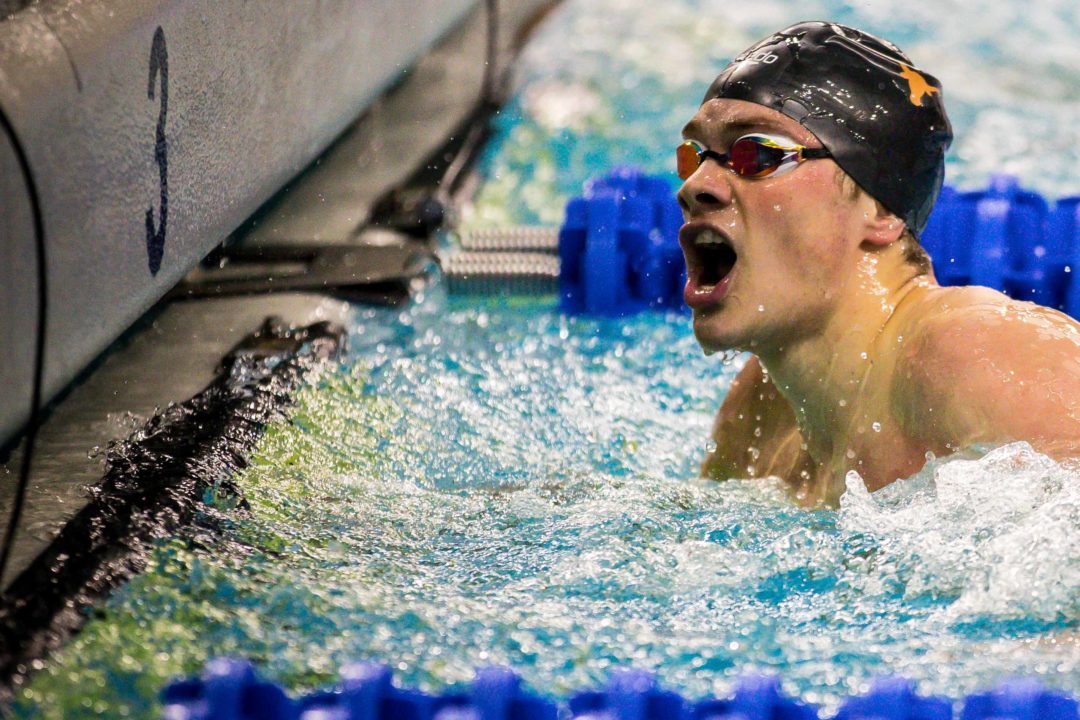 Our recruiting class ranks for the current crop of graduating seniors, all the way back in 2015: #1 Texas, #2 Cal, #3 USC. How did those classes (and the rest of our top 12) turn out after four years? And what would a revised top 12 list look like? We have the answers - and the data - here. Archive photo via Jack Spitser/Spitser Photography

Back in July/August of 2015, we ranked out the top 12 recruiting classes nationwide. You can look back on our ranks here:

This class was mostly predicated on two senior transfers, neither of whom wound up scoring at NCAAs. Al-Yamani was a relay scorer at NCAAs a few times.

Tidd, Doerr and Becker were framed as a trio of sprinters to build around – Becker certainly over-achieved, becoming one of the best sprinters in the nation by his final few years. He scored 51 points all by himself, not to mention his big relay impact. None of the others scored, but 4 of the 7 were still on the roster as seniors.

Decoursey only scored two points individually, but he had a much bigger relay impact than that. Zeng joined the program late and was a redshirt senior this year, but he was a massive NCAA diving scorer. Reilman was an NCAA relay scorer. Powers was a big name out of high school, and did make pretty solid SEC contributions. Browne was an NCAA qualifier as a freshman, but dropped off the roster after that.

Afrik was a relay scorer at NCAAs, though no Notre Dame relays made the meet during his senior year. So was Speers, though he didn’t remain on the roster for his senior year. The rest of the class didn’t do much, and six of the ten no longer appear on the Fighting Irish roster.

Switkowski was a great pickup – he wound up part of a Florida senior class a year ago that led the nation in scoring. He chipped in 118 himself. The rest of the class didn’t do as much. Katz never appeared on the roster. Ranked recruits Palazzo and Balogh combined for zero NCAA points, though they had four invites between them and were productive SEC swimmers. Main scored on a couple of NCAA relays. Lebed also got an individual NCAA invite.

Novak and Houck both scored individually, Houck as a junior and Novak as a junior and senior. This class saw Harvard rise all the way from 44th to 8th at NCAAs. Goddard was on a scoring relay this year.

This class had three scorers… but unfortunately only one of the three was scoring for Arizona by the end. Dobbs scored all four years for the Wildcats, spanning two coaching staffs. Bish scored in his first two years before transferring out to Missouri State and scoring there as a senior. Sanders never scored for Arizona, but just put together a scoring swim after transferring to Florida. Attrition hit this class hard; six of the ten are no longer on the Wildcat roster.

Another class with some attrition among scorers. Brewer scored individually and finished his career with Auburn. Apple was a huge scorer, putting up 61 points for Auburn before transferring out as a senior and scoring 47 more for Indiana. Stewart scored his only 5 NCAA points with Auburn – he transferred to Texas but never scored there individually. McCloskey was a relay scorer at NCAAs, as was Kalontarov, though the latter didn’t finish out his career with Auburn.

Devine wound up as the big scorer in this class, winning two NCAA titles individually and scoring 199.5 points. Dudzinski also scored individually in two seasons. Cogswell, Anderson and Zdroik all scored as relay members, though the highly-touted Cogswell never made NCAAs individually. This was a very stable class, as all six men finished out their careers on the roster this season.

Vissering and Mulcare were both excellent scorers, putting up double digits in three of their four seasons individually. Grissom was a regular relay contributor over his four years and scored NCAA points that way. Valente never wound up scoring nationally. Five of the eight were on the roster as seniors.

This class very much lived up to the hype. The four top additions ended up combining for 300 individual points. Seliskar was the best swimmer in the nation in his senior season. Both Thomas and Norman needed a year or two to break into NCAA scoring, but made up for it after that with double-digit outputs. Sand also scored in each of his final two seasons. Takahashi was an individual invitee one season. All six of these men remained on the roster through their senior seasons.

A very worthy group of the #1 overall ranking. Haas was the highest-scoring swimmer in the class with 198 individual points. Shebat had a huge college explosion to score 131. Harty, Newkirk and Jackson all scored double-digits over their careers, and Harty still has a year left after redshirting one. Holter added a point in his senior season. The only one who didn’t remain on the roster through their senior year was Melzer, who competed through his junior year.

Wow – never thought I would see a day when Auburn and Arizona weren’t top 5. In the 90s it was a whole different story. Even seeing Stanford not being near the top is crazy. But now we have NC State, Louisville and Indiana. Everything is cyclical, I realize. I just wonder when Wisconsin, ASU and SMU will be back in top 25.

Wow 2 whole points for the MEN Vols of Tennessee! That equals the number of swimming points they are returning from the underclassmen. The future looks the bleakest in over the 50 years of the program’s history. Sad.

Are we stopping at 20 for the swimmer rankings.

It’s unfortunate how ND fared with a top 12 recruiting class. 0 senior NCAA scorers with less than half the class still on the team? Maybe it’s time to look at the HC

Didn’t that already occur? Wasn’t the referenced class recruited by Matt Tallman? Tallman departed under a cloud. Notre Dame then combined their programs under Mike Litzinger. The coaching change and the resulting change in culture and expectations may have played a part in retention of the class over their four years.

6
-3
Reply
The Wolf of Raleigh

How about those apples!

Once again NC State proving once again they are the best program for developing swimmers!

Did not have a top 12 recruiting class yet they consistently finish among the best of the best!

Just imagine in a few years when they start getting gifted absurd talent like Cal and Texas!

Are change is coming.

5
-33
Reply
Anakin
Reply to  The Wolf of Raleigh

Was just about to say this 😂

According to CollegeSwimming Max Holter #21, Shebat was ranked #32, and Newkirk was ranked #222. As far as NC State goes Ress was ranked #157, Hensley #532 and Bretscher #257. Interestingly Coleman Stewart was ranked #117 coming out of high school. I think there is a huge difference here and yes NC State does a great job of developing swimmers especially when they don’t get top notch recruits.

9
-2
Reply
Klorn8d
Reply to  The Wolf of Raleigh

Hensley was a transfer and Vazaios a midseason acquisition, so really the class as it was ranked only scored Ress and Bretscher. Which would have put them… right in front of Minnesota.

Sometimes I wonder whether you’re a troll or whether you actually went to NC State, and then I read a sentence as eloquent as “Are change is coming.” and I know the answer.

15
-2
Reply
Meeeeee
Reply to  The Wolf of Raleigh

I would say Louisville is at least NC State’s equal in developing swimmers.

5
-1
Reply
JP input is too short
Reply to  Swimdude

Yeah, that would have been a nice sprint group there with Afrik, Speers, and Jackson.

wow, that was a bad class for Michigan. Too much focus on the women’s team who has done very well?

I don’t think that’s fair. They had very very good classes sandwiching this one and there is only so much money to go around. White, Sanders, Powers, Ransford in 2018 plus Swanson, Auboeck, Smachlo, Cope in 2020 more than makes up for this dud of a class

Agree with Anakin. Plus their programs are pretty much separate. I don’t think the guys or coaches say “we don’t have to perform because the women had a heck of a meet”

Who said they said that? I’m around UM quite a bit. They aren’t “pretty much separate”. Anyways, just an observation.