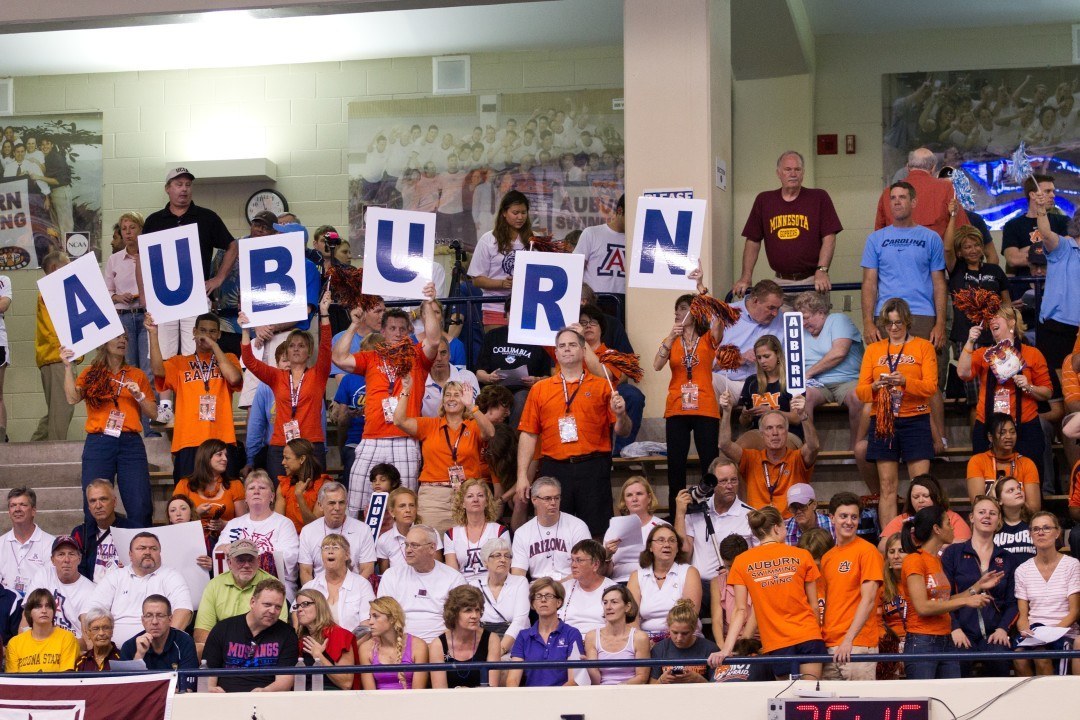 The recent addition of 2015 European Games champion Ziv Kalontarov has given Auburn fans another reason to cheer heading into the 2015-16 NCAA season Archive photo via Tim Binning/TheSwimPictures.com

With Worlds and U.S. Nationals coming around the corner, we’re back to finish off our countdown of the 2015 NCAA recruiting classes.  This week’s list (5-8 on the men’s side) includes two teams from the SEC, along with a rebuilding Pac 12 team and a surprise appearance from a mid-major school.

If you missed last week’s article, which included our methodology and a link to the full list of athletes, click here.

The Gators are the first team on our list with a class of nine athletes heavily weighted towards their strongest events historically.  The first is #16 Brennan Balogh, one of the more versatile prep swimmers we’ve seen in recent years out of high school.  Balogh has had a lot of success in the 200’s of stroke (1:43.8 backstroke, 1:46.4 fly) and both IM’s (1:47.6/3:48.9), and those strengths fall right in line with Greg Troy’s program.  Florida always has a ton of talent across most of these events, but are looking a bit weaker at the top-end than years’ past.  Without the likes of Dan Wallace, Matt Elliott, and Carlos Omana, don’t be shocked to see Balogh play a big role right away in a number of different events.

Next on the list is Ross Palazzo, a top-five breaststroker (54.3/1:57.7) with enough in the three other strokes to turn in great IM times, as well (1:47.5/3:51.1).  It may not be right away, but Palazzo is a natural replacement for the now-graduated Eduardo Solaeche-Gomez or Matt Elliott, both multi-event All-Americans who developed into Florida’s top breaststrokers.

Neither of these two, however, is the fastest incoming IMer.  That title belongs to Germantown’s Alex Lebed, who was runner-up at Speedo Winter Juniors last season in the 400 (3:47.4), and recorded the fourth-fastest time of the meet in the 200 (1:47.0).  Lebed doesn’t have a single standout stroke; he doesn’t have another individual event that would have gotten him recruited to a top-tier school.  However, he doesn’t have a particular weakness.

The Gators dipped into a familiar (literally) recruiting pond and snagged Bayley Main, brother of Florida school record holder and senior Corey Main.  Bayley doesn’t have a ton of short course swims on his resume, but carries long course bests of 23.5/51.4 in the 50/100 freestyle (right around where his brother was coming into his time in Gainesville), and 57.4 in the 100 back.

While the Crimson don’t have a single swimmer that landed in our top 20 last fall, they have brought in a group of nine that replenishes every freestyle event, along with some support in the backstrokes and IMs.

Leading off this class is a pair of sprinters in Sebastian Lutz (20.0/43.7) and Grant Goddard (20.6/44.8) that will be a focal point in Harvard’s efforts to reclaim the Ivy League title from their archrivals.  Lutz was a big-time recruit before he exploded this past season to turn in times already good for A-final appearances at Ivies.  Combined with his impressive butterfly (47.8) and breaststroke (56.5), Lutz is one of the best sprint recruits we’ve seen enter the Ivy League.

Goddard is in the mix for relays right away, particularly the 400 freestyle, where Harvard had two 44-second swimmers from a relay start last March.  Individually, his 100 freestyle and 100 butterfly (48.6) are currently in scoring position at Ivies (where they score to 24), as well.  With these two, the Crimson are on their way to challenging their 2013 relays, which, anchored by NCAA individual qualifier Chris Satterwaite, rewrote the conference record books.  There’s some extra motivation, too: archrival Princeton took all five relay titles last season

On the other end of the spectrum, Harvard also picked up a trio of top-tier distance swimmers who each bring their own unique strength to the table:

Novak has the most speed, Houck gets better the longer the event goes, and Springer is somewhere in between.  All three would have finished in the top 5 in the 1000, and are borderline A-finalists in the 500 at last year’s Ivies.  Novak and Springer will be competing for spots on the 800 free relay, along with the versatile Justin Wu, a 1:37.4 200 freestyler.

Not to be forgotten is Danny Tran, possibly the most versatile swimmer of the group.  Tran’s best individual stroke is backstroke (48.2/1:43.4), but he’s good enough all-around to put together 1:47.2/3:52.7 IMs.  The 200 back looks to be where he’ll make the most damage right away; Tran has the third-fastest best time among returning/new swimmers in the conference.

Again, much like the women’s class that made the top four in our recent class rankings, this group is <difference makers, etc.>.  In his first class as head coach, Rick Demont has done a superb job addressing Arizona’s relays, which 12 months ago were looking to be in very rough shape once individual NCAA champions Brad Tandy and Kevin Cordes (key relay contributor Brian Stevens) were out the door.  Top-to-bottom, though, the class is loaded with “high-potential” swimmers and intriguing talents who have chopped loads of time in the past two seasons.

The first is Blair Bish, the top sprint breaststroker in the country, and the best possible option to come in and replace Kevin Cordes (and also the second breaststroker from Arkansas now on their roster, joining Gage Crosby).  Bish took a huge step forward this past season to become one of the marquee recruits in this class, cutting more than a full second from his already-elite 54.2 100 breaststroke to ultimately sneak under the 53-second barrier, something only four other prep swimmers have ever done.  He’s already less just two tenths away from scoring position at NCAA’s, and with a full year of college swimming and development, is in striking distance of getting into the 51’s.  He doesn’t quite have the range of the other top breaststrokers in this class (1:58.7 in the 200), but he brings another unique element with his 20.5/45.3 sprint freestyles.

Arizona doubled down on breaststrokers and also picked up Marcello Quarante, a late commit from Scottsdale Aquatic Club with lifetime bests of 55.6/2:00.1.  Quarante has chopped at least a second in the 100 and 1.8 seconds in the 200 each of his four years in high school.

Zimbabwe Youth Olympian Chad Idensohn is the third potential new face on relays next season.  Idensohn is a “pure speed” athlete, similar to Arizona’s #1 sprinter Brad Tandy, nearly cracking 23 seconds in the long course 50 free (close to 20.0 SCY), while barely cracking 52 in the 100.  With the graduation of Tandy and Brian Stevens, Idensohn is probably the next-best option on the 200 free relay as Arizona looks to rebuild.

Much like the women’s class we highlighted a few weeks ago, the Tigers have gone with what they know.  This class is loaded with sprinters, headlined by the recent addition of Ziv Kalontarov, the Israeli National record holder and 2015 European Games champion in the 50 meter freestyle.  With an LCM best of 22.16 in the 50 freestyle, Kalontarov clocks in as one of the fastest sprinters to ever enter the collegiate ranks.  Conservatively, that gives Brett Hawke another 19.2-19.4 50 freestyler to add to his plethora of sprint weapons, which includes four other athletes with lifetime bests under 19.5, and makes the Tigers very, very early favorites in the 200 free relay next March.

Christian Selby and Zach Apple are the other two, with near-identical 50/100 best times of 20.4/44.7 and 20.4/44.6, respectively.  Selby is a pure sprint freestyler that hails from the powerhouse Baylor School up in Tennessee.  Apple jumped ship from Western Kentucky following the program’s five-year suspension, and is widely considered a big-time “diamond in the rough” talent; he only recently started swimming year-round, and since last fall’s signing period, Apple improved his best time in the 100 free by over two seconds.

Sprint butterflyer Liam McCloskey is the final top recruit coming in for the Tigers.  McCloskey is a bit of a one-trick pony right now, but his 47.7 100 fly already puts him in scoring position in the highly-competitive SEC, and gives Auburn some much-needed depth following the graduation of Alex Hancock and Allen Browning.

Check back for part three later this week!

Along with the other comments regarding the lack of mentioning Zona’s incoming freshman, the late great Chunky Ragu. 45.3/21 mid in the backstrokes as a sophomore, no swim junior year due to his chunky ragu surgery on his ragu, but I’d say he is the one person on this list who is going to become the biggest factor at the NCAA level.
-Ragu Out

Bish for Zona as one of “the marquee recruits of this class”? He’s got a good 100 breast, but there are faster in his class (ie. Vissering) and he doesn’t have an NCAA caliber 200 or second event in general. Nobody needs a one trick pony

Well we’ve all seen how Brandy Collins can develop breaststrokers. Kevin Steel grabbed 2nd place at NCAAs his junior year and that was the only event he scored in. Still brought in more points than some swimmers who had 2 or 3 events. I think he can work on his 200. It’s not set in stone after all, but I do see your point.

Florida should be ahead of Harvard a 1:47 long course 200 freestyler is a huge asset and he has a monster fly. And if Katz can be as fast as he was 2 years ago 1:36 as a 16 year old he should be quite a threat

Any speculation on the top 4?

I think we can all agree: Texas cal USC. No fourth school comes to mind, but I don’t know who Michigan picked up. I honestly think Florida’s class should be up there. And based off times alone, this statement doesn’t make much logical sense, but Zona has a damn good class coming in.

Palazzo of Florida was the #13 recruit according to your rankings by the way, so they had 2 top 20 recruits along with a lot of depth. Not sure they should be 8th..

I bet team #4 is Stanford, but maybe Georgia.

Along with the other comments regarding the lack of mentioning Zona’s incoming freshman, Chatham Dobbs. 48.3/22 mid in the backstrokes as a sophomore, no swim junior year due to shoulder surgery, but I’d say he is the one person on this list who is going to become the biggest factor at the NCAA level.

Thats all Justin Wu is? He’s also got a 1:47 200 Fly… Not to mention his IM and other freestyle distances…