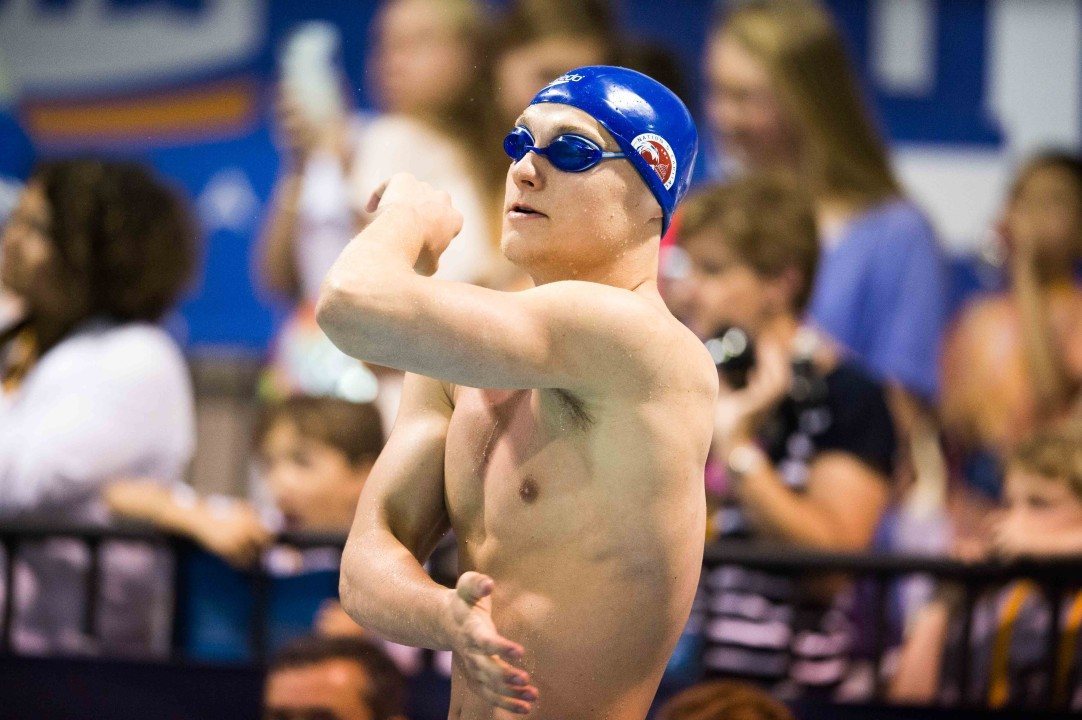 Top recruit Andrew Seliskar is one of many reasons the Cal Bears find themselves with another top four recruiting class. Current photo via Mike Lewis/Ola Vista Photography

Finally!  Our 2015 Men’s NCAA Recruiting Class rankings are here!  At this point, the top four teams (which includes three squads from the mighty Pac 12) shouldn’t be a surprise; there wasn’t much debate over who should in the top four, or which order they came in.

If you’re looking for a refresher on the remaining of our rankings, check out our first two articles:

The Cardinal had a ton of question marks heading into last recruiting season, largely focused on where they would be points-wise without David Nolan and diver Kristian Ipsen.  The losses of Drew Cosgarea and Thomas Stephens are hurdles, too. However, Nolan and Ipsen accounted for almost 100 individual points and factored into Stanford’s four most important relay swims.  There’s no easy way to come back from those losses, but the Cardinal landed a very solid class of six swimmers, including three top 20 recruits, putting them in our #4 spot.

Ted Knapp and Scott Armstrong went hard after sprint freestylers, and came away from the fall recruiting cycle with three good ones.  First is Cole Cogswell, who has thrived while training under Coley Stickels at sprint powerhouse Canyons Aquatic Club (home of Abbey Weitzeil, among others).  At 20.1/43.8/1:36.8, Cogswell will be an important cog in the Cardinal freestyle relays alongside 19.5/42.8 sophomore Sam Perry.

Breaststroker Matt Anderson may be the biggest pickup in the whole class for the Cardinal, who haven’t had a reliable, top-flight breaststroker outside of Nolan since 2012.  Anderson (along with recent verbal commit Hank Poppe) should help Stanford’s breaststroke group on its mission to return to prominence. Back in the late 2000’s the Cardinal were typically sending 4-5 different breaststrokers to NCAA’s every season.  Over the past two seasons, Anderson has posted massive drops to get down to 53.5 and 1:55.3 (the latter being the third-fastest prep 200 breaststroke ever), making him the fastest swimmer in both events on the Stanford roster this fall.  He’ll be counted on right away, too; Stanford didn’t put a single swimmer in the top 8 in either breaststroke at Pac 12’s last season.

Like their two Pac 12 rivals on this list, the Trojans bagged three top 20 recruits, addressed their three biggest needs, while also bolstering what might be their strongest event group.

Carsten Vissering, our #4 recruit and the top non-Seliskar breaststroker in this class, is the most important piece here for Dave Salo and his staff.  The Trojans were highly competitive in both medley relays last season, including a 400 medley relay title at Pac 12’s. However, ultimately they were giving up at least a half-second to their peers over the breaststroke leg of the 200 medley, and double in the 400.  At 24.8/52.4/1:55.4, Vissering is now the top sprinter on USC’s roster, and you could make the argument he’s actually better than those short course times indicate; his 1:00.86 LCM 100 breaststroke is the fastest prep time in history.

Alex Valente is a ready-made NCAA butterfly product (46.0/1:44.1, both top 6 at Pac 12’s last season) who, with a season or two under Dave Salo, has the tools to do serious damage at the Pac 12 and NCAA level.  He’s a bit of a luxury addition; USC is already loaded in the 100 fly with two swimmers under 46.0 and two more under 46.5, and they’re also returning the Pac 12 champion in the 200 fly (Michael Domagala).  However, the arrival of Valente makes it easier for Salo and his staff to push Santo Condorelli–USC’s #1 fly option last season–to the freestyle leg of the 400 medley.

Overall, the Bears didn’t have any dire needs coming off of their 2nd place NCAA finish, but they did have some weaknesses that needed to be addressed.  Dave Durden did just that, loading up his third straight top three recruiting class, including the #1 overall recruit (Andrew Seliskar), the #3 overall recruit (Michael Thomas), a top three distance freestyler (Nick Norman), and a top five breaststroker (Carson Sand) of the top 20 recruits in our rankings from last fall.

We’ve labored on and on about how good Andrew Seliskar is… but let’s marvel at his short course bests one more time:

The times in bold above would have made the A-final at NCAA’s last season.  If Cal’s class consisted of just Seliskar, it probably would probably have been ranked 4th or 5th on our list.  Seliskar could help any team right away in all four strokes, but given the layout of Cal’s roster, he will likely end up as the breaststroker on one or both medley relays, along with potential appearances on the 400 and 800 freestyle relays.  Individually, things remain a bit more up in the air, but if we had to pick now, we’d guess he ends up in the 200 IM, 400 IM, and 200 breaststroke.

The Bears’ have been quietly rebuilding their deep breaststroke group over the last couple years, and have added an important piece in native Californian Carson Sand.  While Seliskar may be the #1 relay option this coming season, Sand (53.5/1:58.1) gives Cal another layer of depth alongside Connor Hoppe, Zach Stevens, and Hunter Cobleigh.

If Cal does have a weakness heading into this year, it’s in their mid-to-long distance freestyle group.  Long Gutierrez is improving rapidly, and Trent Williams is still around, but the Bears didn’t score a point in the 500 or 1650 at NCAA’s last season.  That may change this year, as associate head coach Yuri Suguiyama now has the talented Nick Norman to work with.  Norman is the #2 distance freestyle recruit in this class, and seems to get better as the distance increases, with lifetime bests of 1:37.3/4:17.0/8:54.3/14:50.8.  That 1650 time would have scored at NCAA’s last March.

The rich get richer.  We originally had the Bears just neck and neck with the Longhorns, but the recent pickup of sprinter Tate Jackson pushed the defending NCAA champions to the top of the recruiting rankings.  Jackson is one of three top-20 recruits the ‘Horns wrangled last fall which, combined with big improvements from John Shebat and Ryan Harty in the past twelve months, should continue to keep Texas in the NCAA title hunt for years to come.

The ‘Horns are now without four-year All-Americans Kip Darmody and Clay Youngquist, but 90%+ of their core is back.  Throw in this class, and as along as Eddie Reese and Kris Kubik still have their mojo, the Longhorns are all set.

As the saying goes, “everything’s big in Texas”. This class in unbelievable! Ryan Harty & Townley Haas are destined for NCAA greatness and Breaststroker Casey Melzer is a diamond in the rough. UT will be tough to compete against for many years to come.

Huge advantage to over recruit for Texas and Cal as public universities versus USC which has a much higher cost of attendance. T

USC perhaps has a generous endowment for financial aid but that is going to be limited to a needs based criteria and beyond the application to upper middle income families.

I would expect more opportunity at Texas than USC to apply for academic merit as well, particularly for an in state student as I assume similar to schools like Georgia and Florida that fight very hard… Read more »

Would think your USC commentary also applies to Stanford as a private institution. If $$ is a factor for an incoming swimmer it’s a challenge for private schools.

CA Sunshine – surprisingly, Stanford isn’t that expensive for the education you get. On a high level, it’s about $10k less per semester for undergrads.

Cal losing Stubblefield and Messerschmidt, two of the best sprinters in the country, and not really reloading in the sprinter department. Murphy and Lynch can only do so much, their relays are gonna start hurting.

Actually, Messerschmidt will be a senior this year…he took one year off. Cal still needs a 4th sprint freestyler, I would say. They have a few options, but need to produce a significant fourth.

I think Seliskar, at 43.19, will actually have the third-fastest 100 free on the team, behind Messerschmidt and Murphy. I’m not sure off the top of my head, but I’m going to guess you don’t see someone (who can) make the A-final of the 200 breast also swimming on an A-final 4×100 free relay team. It’ll be interesting to see what he ends up swimming at NCAA’s.

Eddie’s idea of “a diamond in the rough” is 6’5” – 6’6” skinny young men that he will coach up and put some muscles on. Both Anya and Nichols are very tall. .Happy to see Safa Anya lived up to his potential from age group days when he was winning TAGS. Hope Jack Lavant will swim for the Horns.

Plenty of talent coming up in Texas

Grieshop, Henry, Levant, and Zettle are major talents. Not familiar with Cowan.

Zettle remains me of Connor Jaeger.

You also forgot Chris Yeager. And Ryan Geheb is now at Nitro as well. Plus about 6-10 other Nitro swimmers that are close behind and coming up. Juniors for the next couple of years should be a lot of fun for Nitro fans.

And I think that is most people’s idea of a swimming “diamond in the rough”. It’s always exciting to see one pan out, and Eddie seems to get about one a year that does.

Although all of these schools typically do well with what they get (i.e., the top talent) i’d say the mark of a highly successful program is getting a similar level from kids who are not as highly recruited. I’d say NC State has a lock on this right now.

I also think what NC State is doing is amazing as a very successful program that is fun to watch.

Disagree with JMan on one point – for last year’s (maybe even the year prior) recruiting class I would say that NC State DID get top talent. Highly ranked swimmers like Held, Stuart, and some top-tier international folks were added to the team – these swimmers were clearly not “unknowns”. The incoming 2014 recruit class was in the top ten in the nation last year, as I recall. Maybe 2013 as well?

The NC State coaches develop their swimmers, but for 2014 at least, it wasn’t a team of unknowns developing into a team that finished in the top… Read more »

No offense against USC, but it is USC…. Brand new facility with awesome financial aids, oh and it’s in LA.. so they should be contending for the top 4 every year!

Why would they take offense from your compliment..?

USC was 4th at NCAA’s in 2013 & 2015. Not as much depth as some of the public state universities as USC private where costs to attend come into play. Makes it all that more impressive that Salo & other coaches can get enough points from fewer swimmers to be able to stand on the podium & get hardware. Only those who haven’t made their NC cuts rest for Pac 12’s.