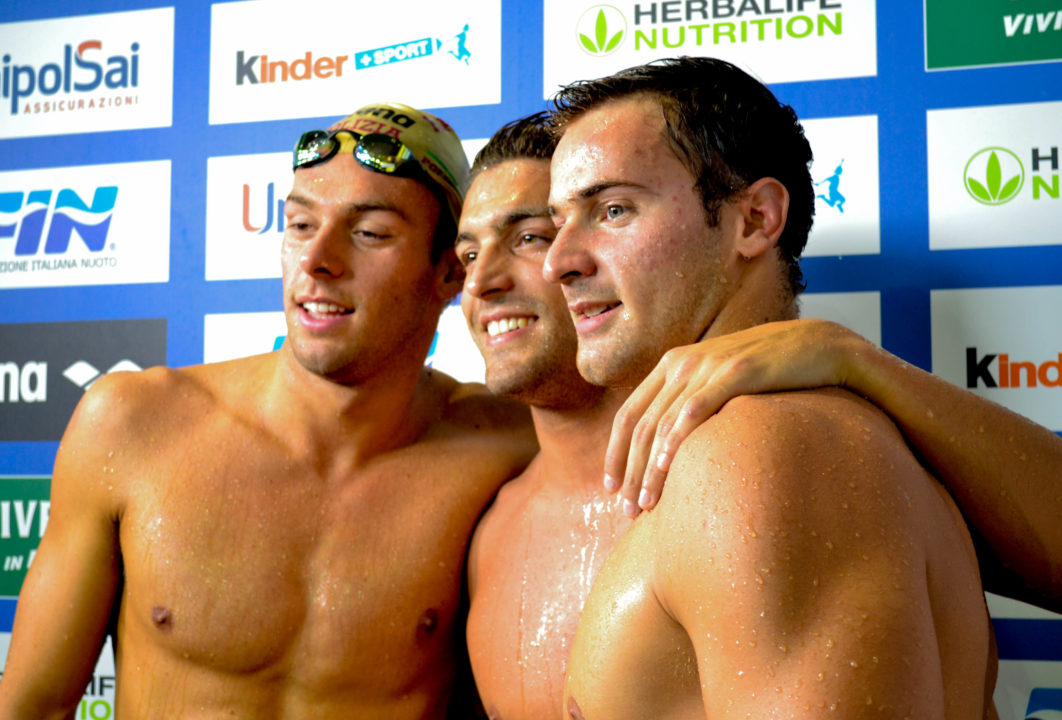 Gabriele Detti got it done in the men's 800m free over Gregorio Paltrinieri, while Federica Pellegrini added another event to her Gwangju line-up by winning the 100m free.

Gregorio Paltrinieri and Gabriele Detti returned to compete side by side tonight in Riccione, with the freestyle aces going head-to-head in the men’s 800m freestyle. In fact, the 4 center lanes in tonight’s final were all occupied by athletes who are part of the same training group at the Federal Center of Ostia, trained by the federal coach Stefano Morini .

Detti already made his presence known here in Riccione on night 1, matching the Italian National Record in the 400m freestyle with his 3:43.36 gold medal stunner. Tonight, he doubled up on that accomplishment with another electrifying performance, clocking 7:43.83 for the 800m free win.

Paltrinieri also put up a powerful performance, racing neck-and-neck with Detti until the last 100m. The 1500m freestyle Olympic gold medalist settled for silver this evening in 7:45.35. Domenico Acerenza also landed on the podium in 7:47.20, his best time by well over 3 seconds.

All 3 men easily swam under the 7:51.06 time needed for Gwangju, with Paltrinieri and Detti getting the nod. The pair also insert themselves as the #1 and #2 swimmers in the world this season.

The 19-year-old European Championships silver medalist in this event, Ilaria Cusinato, fell less than a second shy of qualifying for this year’s World Championships, stopping the clock in 2:11.89 to take 200m IM gold.

In Glasgow, Cusinato earned silver behind Hungary’s Katinka Hosszu in 2:10.25, a mark that would have easily dipped under the 2:11.07 QT. Runner-up this evening was Anna Priovano, who touched in 2:13.84, while Sara Franceschi took bronze in 2:13.95.

The men’s field also came away without a qualifying time, as winner Alberto Razzetti wasn’t able to dip under the 2:00 barrier. A 1:58.2 was needed for Gwangju, while Razzetti logged 2:00.11, finishing .77 ahead of silver medalist tonight Giovanni Sorriso.

Adding another gold to her haul here in Riccione was Olympic icon Federica Pellegrini, who added tonight’s 100m free to her 200m free earlier in the meet.

The 30-year-old versatile athlete cracked the 54-second mark tonight by registering a winning time of 53.72, just meeting the qualification mark needed to add this event to her line-up in Gwangju. She owns the Italian National Record of 53.18 from 2016.

With her result this evening, Pellegrini now enters the season’s world rankings as the #7 swimmer, tying Australia’s Emma McKeon.

Erika Ferraioli was runner-up tonight in 55.07, while Silvia Di Pietro took bronze in 55.22.

Reigning European champion Alessandro Miressi topped a tightly packed men’s 100m free final, getting to the wall first in a winning mark of 48.32. That separated him from Manuel Frigo and SAnto Condorelli, who roared to the wall just a hair later in 48.56 and 48.57 for silver and bronze, respectively.

After this morning’s heats, Condorelli, Miressi, Ivano Vendrame and Luca Dotto were all tied with the top seed of 49.02. Vendrame ultimately wound up 4th tonight in 48.97, while Dotto took 6th in 49.00.

In Glasgow, Miressi took the European title in a speedy 48.02, so tonight was .3 behind that result. His time this evening also sits outside the 48.2 time standard set for this summer’s World Championships for an individual swim.

For his part, Dotto was 48.45 for 5th in Glasgow, so he’s no doubt disappointed not have clipped the 49-second threshold this evening.

Miressi enters the world rankings as the 6th fastest performer in the world this year, while Frigo is 7th and Condorelli is now 8th.

20-year-old triple European champion Simona Quadarella fired off a big-time swim this evening to take gold in the 1500m event. Stopping the clock at 16:04.02, Quadarella adds this event to her Gwangju line-up, and also checks herself in as the 4th fastest performer in the world this year.

CS Esercito squad took the top spot tonight courtesy of the stacked line-up of Niccolo Bonacchi, Fabio Scozzoli, Piero Codia and Vendrame. Bonacchi kicked things off in a swift 55.25, while Scozzoli kept the momentum going for the foursome with a 59.65 split. Codia kept up with 52.49 in the fly, while 4th place finisher in tonight’s 100m free, Vendrame, closed in 49.12.

However, Fiamme Oro would have taken the gold handily in a time of 3:32.66, were it not for a disqualification. Thomas Ceccon led-off in 53.77, followed by Nicolo Martinenghi‘s sub-59 second split of 58.87. Then Matteo Rivolta notched 51.51 followed by a 48.51 anchor by Miressi.

In essentially what wound up being a 2-team race, Team Fiamme Oro stood on top of the podium in the women’s edition of the medley relay. National Record holder Margherita Panziera led off in a smoking opener of 58.92 to giver her squad a sizable lead, with the next closest competitor of Silvia Scalia behind in 1:00.30.

For Panziera, her time tonight represents a lifetime best and new Italian National Record. Look for a separate post detailing this performance.

Fiamme’s next swimmer was Ilaria Scarcella, who notched 1:08.07 on the breast, a mark which was evened out by Fiamme Gialle’s Arianna Castiglioni, who clocked 1:06.07.

The fly legs between the top 2 squads were fairly even, with Cusinato clocking 59.44 to Aurora Petronio‘s 59.54, while the anchor made the different to give Fiamme Oro the gold over Fiamme Gialle. Giada Gazili brought it home in 55.41 to Alice Mizzau‘s 56.10 to settle the race.

I’m wondering if getting in a good shape early in the season and showing the interest in 200free again by Sjostrom and Pellegrini has anything to do with the Big Pay Day by FINA at CHAMP meet.

Huge swim from Panziera tonight. If she can carry that improvement across to the 200 she may well be sub 2.05 this week. If improvement was linear she’d be threatening the WR – We know it doesnt work like that usually though.