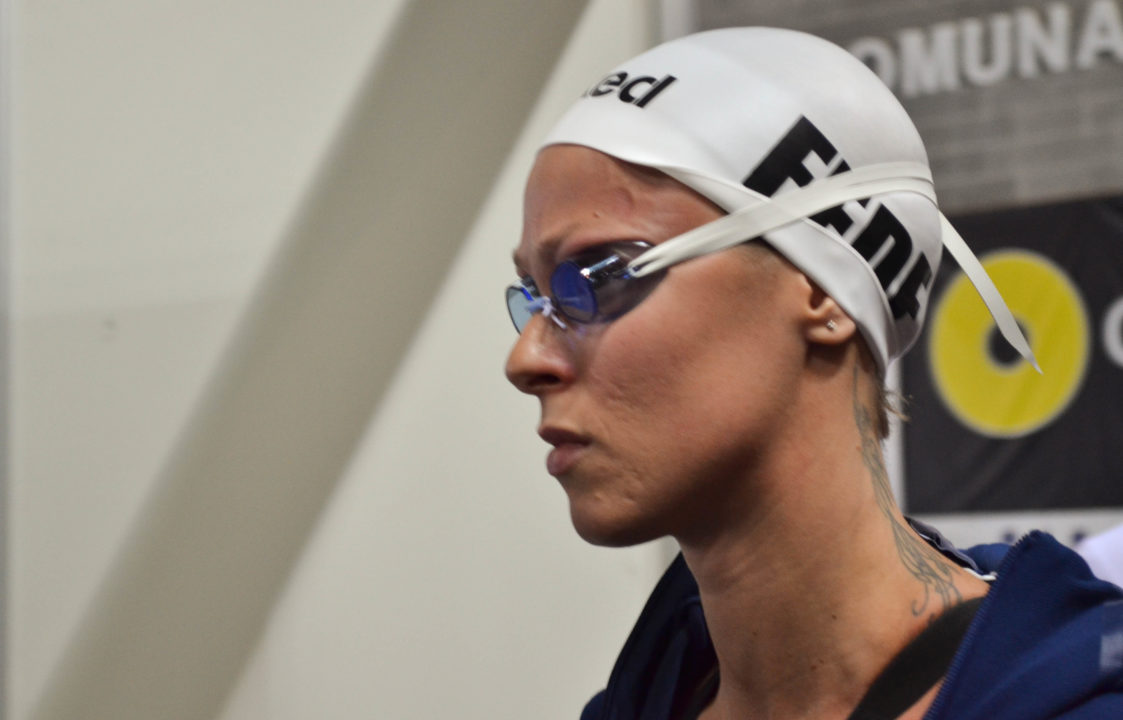 After having sworn off the 200m freestyle in months past, Italian swimming icon Federica Pellegrini pounded out a winning mark of 1:56.60 to crush the field tonight by over 2 seconds. Current photo via Giusy Cisale/Swimswam.com

While competing on day 2 of the Italian Championships, the meet which qualifies swimmers for this summer’s World Championships, Silvia Scalia threw down a new national record in the women’s 50m backstroke.

Scalia first knocked down the mark this morning with her top seeded AM time of 27.91, an outing that took over the previous NR 27.94 held by Carlotta Zofkova.

In tonight’s final, the 23-year-old Scalia busted out an event faster 27.89 to take the win here tonight in Riccione. That situates Scalia as the 6th fastest swimmer in the world so far this season, but it does fall short of the 27.7 minimum time standard needed to represent Italy in Gwangju this summer.

Tania Quaglieri touched in 28.67 for silver tonight, while Costanza Cocconcelli rounded out the top 3 in 28.91.

There was a tie in the men’s 50m fly tonight, as Piero Codia and Santo Condorelli each hit the wall with identical efforts of 23.76. For Codia, tonight’s time was slower than his morning swim of 23.58, while Condorelli was much quicker than his 24.18 AM mark that rendered him in 7th place.

Codia holds the NR in 23.21, a time clocked way back at the 2013 World Championships in Barcelona.

For Condorelli, although he doesn’t hit the 23.2 QT, his title does represent his first one since changing to Italian representation last June. His personal best rests at the 23.30 he notched back in 2015 at that year’s World Championships where he finished 9th in the semi-final.

Beating the 100m fly field in a Gwangju-worthy time was Elena Di Liddo, who hit the QT exactly in 57.80. Her time tonight checks-in as the 4th fastest performance in the world, tying America’s Amanda Kendall.

Ilaria Bianchi, the reigning national record holder in this event, finished well back in 58.33, while Federica Greco took bronze in 59.69.

Di Liddo was even faster this morning, rocking a prelims swim of 57.61 to take the pole position tonight. That wipes out her previous season-best of 58.57 from the Madrid Open last month.

Thomas Ceccon earned his 2nd Italian Junior Record in as many days, following up his 50m mark with a 100m achievement tonight. Ceccon clocked 53.60 tonight to overtake his previous personal best of 53.65, as well as dip under the 53.7 minimum time stadard to add his name to the italian roster for Gwangju.

Ceccon earned the bronze medal in this 100m back event, as well as silve rin teh 50m back at last year’s Youth Olyumpic Games.

Taking silver otnight was Matteo Restivo, who notched 54.43, while Matteo Milli was right behind in 54.45.

Reminder that Simone Sabbioni, the Italian Natioanl Record holde rin this event, is not competing her in Riccione due to a shoulder injury.

Falling short of the World Championships qualification time of 2:23.90, a mark less than .6 off of the Italian NR, Martina Carraro took gold in the women’s 200m breast tonight in 2:25.96. That checks-in as a new best time for the 100m breaststroke winner from last night, crushing her previous lifetime fastest of 2:27.92 from this same meet last year.

A tight battle ensued between Fabio Scozzoli and Nicolo Martingenghi in the men’s 100m breast tonight, but it was the veteran who hit the wall first in a World Championships-qualifying time. Stopping the clock at 59.52, the timeless 30-year-old kept .4 ahead of Martingenghi, who touched in 59.92 for silver. Bronze went to Federico Poggio in 1:00.24.

However, Martingenghi was even closer to the QT this morning, where he notched the only sub-minute time of the field in 59.65, just a tenth off the 59.5 mark needed.

After having sworn off the 200m freestyle in months past, Italian swimming icon Federica Pellegrini pounded out a winning mark of 1:56.60 to crush the field tonight by over 2 seconds. The field included European Championships triple gold medalist Simona Quadarella, who clocked 1:58.83 for silver tonight.

For Pellegrini, her solid effort slid well under the 1:57.1 Worlds QT and also inserts itself as the 3rd fastest performance of the season, sitting only behind fellow powerhouse athletes Katie Ledecky of America and Sarah Sjostrom of Sweden.

Gold tonight went to CS Esercito, a team of which Gabriele Detti was a part. In his 2nd leg, Detti split 1:45.75 for the fastest of the field. The entire relay notched a winning time of 7:12.22 for gold. Young Matteo Ciampi scored an anchor split of 1:46.98 as part of the same squad.

Stefano Di Cola, a member of Marian Militaire, clocked 1:46.52 for another strong split.

These swimmers over 30 years old but still very good.

Hi Loretta, would you be able to upload videos? Is there a way to watch the races??

thats super fast for a long distance swimmer….indeed , its worth a solid mention .

She doth unsheathe her sword to slay her enemies!