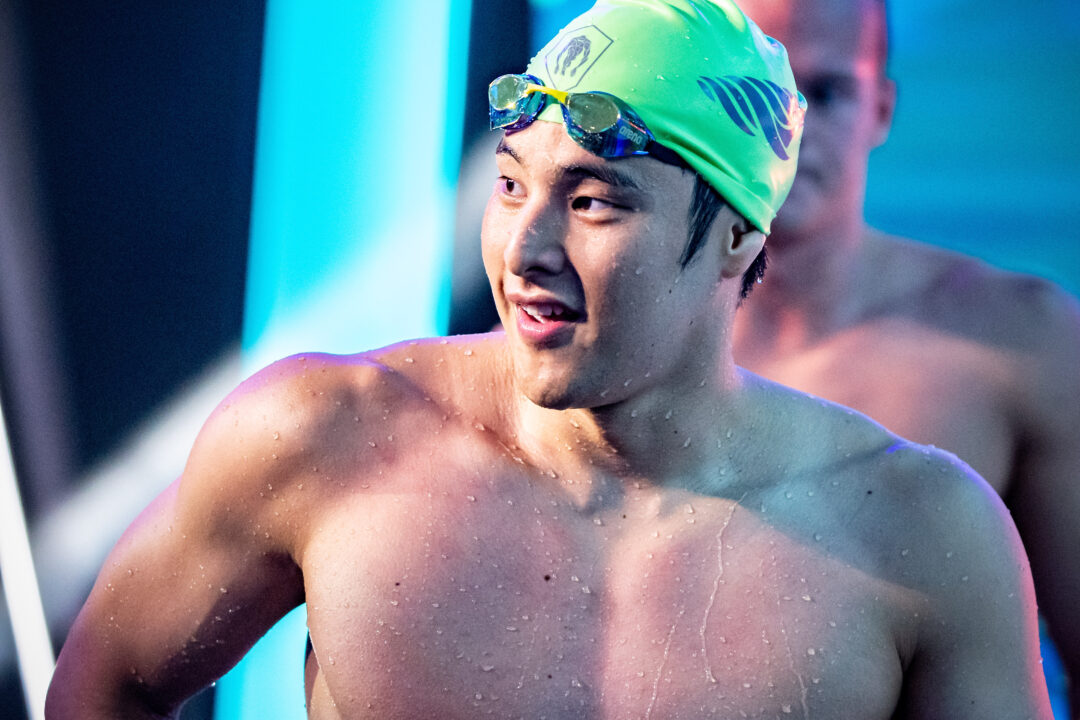 Match 8 of the 2021 ISL regular season features 3 teams that have been in the ISL Final each of the past 2 years as well as the Tokyo Frog Kings. Current photo via Giorgio Scala/Deepbluemedia

Match 8 of the 2021 ISL regular season features 3 teams that have been in the ISL Final each of the past 2 years as well as season 2 newcomers the Tokyo Frog Kings. Fans can expect this match to feature an exciting fight for 1st between Energy Standard and the London Roar while the LA Current and the Tokyo Frog Kings duke it out for 3rd.

Energy Standard brings in a strong fly crew with the likes of Chad le Clos, Anastasia Shkurkai, Maddie Banic, and Kregor Zirk. Additionally, Helena Bach Rosendahl, Mary-Sophie Harvey and Andrey Zhilkin can also step in if needed. London, meanwhile, roars back with Emma McKeon, Marie Wattel, Ilaria Bianchi, and Laura Lahtinen on the women’s side, and Vini Lanza, Teppei Morimoto, and Dylan Carter on the men’s.

The LA Current doesn’t have as much depth in butterfly, but some of the greatest races in ISL history have happened when Tom Shields and le Clos are in the pool together. Tomoe Hvas and Maxime Rooney provide great support for Shields in the fly. On the women’s side, Anna Ntountounaki and Helena Gasson have been solid point-scorers this season, though neither has fully filled in for Beryl Gastaldello, who LA has used in a rather limited capacity so far this season.

The Tokyo Frog Kings have a great group of butterflyers with Aly Tetzloff, Leah Gingrich, Harriet Jones, Daiya Seto, and Takeshi Kawamoto, their only problem is that their fly group also gets called upon to swim other events, spreading them a little thin. For instance, expect to see Tetzloff in sprint freestyle and backstroke, Gingrich in the 200 and 400 IMs, and possibly the 200/400 freestyle, and Seto to be in anything from the 400 IM to the 200 breast.

Energy Standard has arguably the strongest men’s backstroke squad in the league thanks to Evgeny Rylov and Kliment Kolesnikov, while Travis Mahoney is a good support player. For the women, Georgia Davies, Mary-Sophie Harvey, and Simona Kubova are all pretty good, but they don’t quite stand up on the level of other team’s, namely London and Cali. Perhaps Energy’s greatest drawback in backstroke is that Rylov and Kolesnikov are also likely to be called upon in freestyle, while other teams like London can use their backstrokers exclusively for backstroke.

Ingrid Wilm has been a pleasant surprise for the LA Current this season, twice breaking the Canadian Record in the 100 backstroke. On the men’s side, Apostolos Christou, Maxime Rooney, and Tomoe Hvas have been left to do the heavy lifting in Ryan Murphy‘s absence, and they’ve done pretty well. Kathleen Baker and Abrahm DeVine provide good backstroke support for LA.

The Tokyo Frog Kings benefit greatly from Grigory Tarasevich, Richard Bohus, and Takeshi Kawamoto on the men’s side. Their women’s backstroke is a little sparse, however, with Cassie Wild, Aly Tetzloff, and Paige Madden left to cover events that at least two of them don’t strictly specialize in.

Energy Standard has one of the strongest breaststroke crews in the league with Ilya Shymanovich, Felipe Lima, and Charlie Swanson on the men’s side, as well as Evgenia Chikunova, Benedetta Pilato, and Jessica Vall on the women’s side. Shymanovich, Pilato, and Chikunova could win multiple events, though London will likely bring them their greatest competition. Annie Lazor and Alia Atkinson are a very strong duo for London though the London men suffer a little without Adam Peaty, instead relying on Ross Murdoch and Sam Williamson.

The LA Current probably has the weakest breaststroke roster of the four teams. Julia Sebastian, Imogen Clark, Anastasia Gorbenko, Sarah Franceschi, Will Licon, and Christopher Rothbauer will need to step it up in order to get any significant points for LA this weekend.

The Tokyo Frog Kings have a strong breaststroke crew with Kanako Watanabe, Miranda Tucker, Daiya Seto, Yasuhiro Koseki, and Alessandro Pinzuti and should be able to get some decent points on the board.

Energy Standard is stacked, stacked, stacked in freestyle. For the men, Ben Proud, Marco de Tullio, Simonas Bilis, and Clement Mignon, represent true freestyle specialists, while other stroke specialists such as le Clos, Kolesnikov, and Rylov are all extraordinarily capable freestylers as well. On the women’s side, Siobhan Haughey, Fanny Teijonsalo, and Maddie Banic are the true freestyle specialists, while Shkurdai, Bach Rosendahl, and Harvey comprise an excellent support class.

The London Roar also has an incredible freestyle group with Duncan Scott, Kyle Chalmers, Dylan Carter, Kenzo Simons, Katsumi Nakamura, Zac Incerti, and Ed Mildred on the men’s side. London’s female freestylers include Emma McKeon, Marie Wattel, Kim Busch, and Freya Anderson, really covering every distance from the 50 to the 400.

The LA Current has a great group of female freestylers also, including Abbey Weitzeil, Madison Wilson, Valentine DuMont, and Beryl Gastaldello. The men’s roster is also pretty strong but has not shown as much promise as the women’s has in season 3, except in middle-distance where Fernando Scheffer and Martin Malyutin are two of the best in the league. Ryan Held, Maxime Rooney, Brett Pinfold, and Vladislav Bukhov comprise LA’s male sprint crew and have put together some solid relays this season, but comparatively aren’t as strong as Energy or London.

The Tokyo Frog Kings bring in top-end speed with Vladimir Morozov, Bowe Becker, and Aly Tetzloff, and also have Paige Madden and Nandor Nemeth to cover middle-distance. Gabby DeLoof, Mallory Comerford, Julie Meynen, Chihiro Igarashi, Pedro Spajari, Ivan Girev, and Maarten Brzoskowski round out Tokyo’s freestyle crew, though of the four teams competing in Match 8 theirs is probably the weakest.

The London Roar probably has the strongest IM crew of the teams competing in Match 8. Duncan Scott, Sydney Pickrem, Vini Lanza, Christian Diener, and Katie Shanahan make for a potent combination of swimmers that can both win their races and place top-5. Essentially, London has the top-end talent and the depth in the IMs. The Tokyo Frog Kings can hit back at them hard on the top-end with the likes of Daiya Seto and Yui Ohashi, though their support swimmers such as Leah Gingrich and Daniil Pasynkov will need to be on their A-game to score any significant points in the medleys.

Energy Standard has Mary-Sophie Harvey, Viktoriya Gunes, and Helena Bach Rosendahl on the women’s side, and Charlie Swanson, Maxim Stupin, and Travis Mahoney on the men’s side. All together a formidable roster, though the women have significantly out-performed the men this season, making the men’s IM one of Energy Standards only weak points.

LA Current has the weakest IM crew of the four teams competing this weekend, though Tomoe Hvas and Anastasia Gorbenko have been huge contributors for the Current and are capable of top-3 finishes in the 100 and 200 IMs. Beyond those two, Abrahm DeVine, Sarah Franceschi, and Beryl Gastaldello round out LA’s IM group. Gastaldello is the ISL Record holder in the 100 IM, though as mentioned earlier, LA has been using her sparingly this season, so there’s little certainty what she’ll swim.

Florent Manaudou and Femke Heemskerk return for Energy Standard, though as relay-only swimmers. Even so, each is capable of big freestyle splits and will likely provide a major boost to Energy’s already stacked relays. Energy Standard is also the odds-on favorite in all three medley relays, though London has a chance in the women’s and mixed medley relays. Tokyo is probably weakest in the medley relays while LA’s women’s freestyle relay represents the greatest threat to Energy, thanks to Weitzeil and Wilson.

Anyone know where to watch?

Andi Murez is also back for Roar

Energy also have Pilato for breast. Should be a competitive threeway race between Energy, London and LA.

is Pilato not competing? you didn’t mention her once, Pilato and chikunova are definitely stronger than Atkinson and Lazor looking at recent form.

Pilato’s only looked okay in the 50 so far this season and Atkinson’s been faster in the 100.

On her insta, SS said she was going back to Naples to race. Do we know if she’s racing today?

we know that Sjostrom’s already reached at least.

How is Pilato not mentioned?