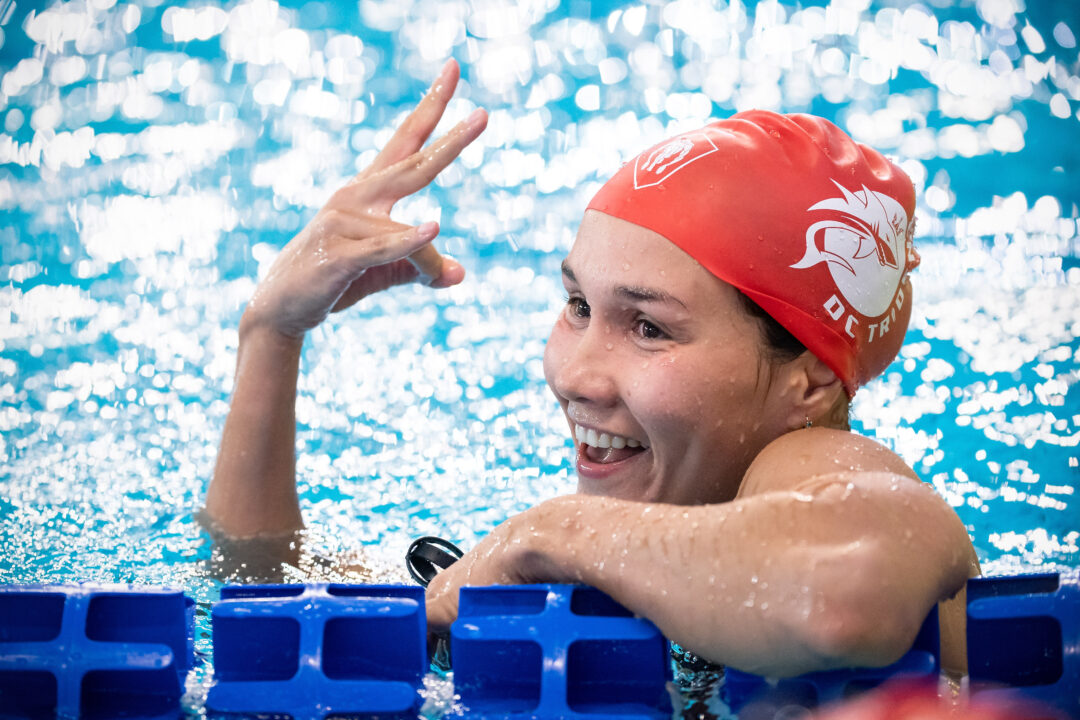 Day 2 of match 5 will end with one team getting its first match victory of the season. Toronto has the lead so far, and there is an exciting battle for 2nd. Current photo via Giorgio Scala

Day 1 of Match 5 had some exciting races, including Louise Hansson swimming a 54.73 100 butterfly split on the Toronto Titans’ 4 x 100 medley relay, as well as a 55.26 in the individual 100 butterfly, making her the 7th-fastest performer all-time. 15-year-old Canadian Summer McIntosh posted a 3:58.78 in the women’s 400 freestyle to demolish the Canadian record and win the event. The DC Trident looked strong and won a total of 7 events, including the men’s 50 freestyle where ISL rookie Ryan Hoffer picked up his first ISL win.

Though DC was very strong on day 1, Toronto won the most events with 9 total victories. DC, as we mentioned, won 7 races on day 1, while the LA Current won 3 events and Team Iron only 2 events.

The LA Current still has time to make up ground on the Toronto Titans who have a 50.5-point lead, though the battle for 2nd is arguably more interesting right now as the DC Trident holds a 1.5-lead over LA.

Friday’s skins races will be butterfly for women and freestyle for men.

LA Current starts off day 2 with a win in the women’s 100 freestyle with Madison Wilson getting her hand on the wall 0.09 ahead of Toronto’s Kasia Wasick. Wilson’s 2nd 50 was a quick 26.46 despite turning in 7th place at 50 meters. LA Current’s Abbey Weitzeil posted a 52.14 to place 5th, giving LA a total of 14 points for the race–Wilson also stole one point from DC’s Ting Wen Quah. LA now takes a lead over the DC Trident. The Toronto Titans did well to earn 13 points with 2nd- and 3rd-place finishes from Wasick and Michelle Coleman. Iron earns 7 points while DC gets only 3 points.

Maxime Rooney gave LA another much-needed win in the men’s 100 freestyle, posting a 46.68, just 0.04 ahead of Toronto’s Blake Pieroni. LA also did well with Brett Pinfold placing 4th to give them a total of 14 points in the race. Toronto, meanwhile, earns 11 points while LA brings in only 9 points. Iron is hurting with just 3 points coming in from this heat.

Alys Thomas gives Iron its first win of the day with a 2:06.00 in the women’s 200 butterfly. Iron teammate Maria Ugolkova places 7th to give Iron a total of 11 points. The DC Trident, however, earn 12 points thanks to 2nd- and 4th-place finishes from Szuszanna Jakabos and Klaudia Nazieblo, respectively. The LA Current earn just 5 points from this race, their weakest of the day so far.

Tom Shields gives the LA Current their third win of the day with a 1:51.28. DC’s Zach Harting charged at the end but couldn’t catch Shields. Even so, Harting placed 2nd in 1:51.99 and DC teammate Velimir Stjepanovic placed 4th in 1:54.65 giving DC a total of 12 points, matching Shields’ haul. Iron’s Mikhail Vekovishchev and LA’s Abrahm DeVine both had their points stolen by Shields.

Ingrid Wilm posted a massive 55.68 to win the women’s 100 backstroke and lower her own 1-week-old Canadian Record in the event. Wilm gets a massive jackpot and steals the points from both Iron swimmers, one DC swimmer, as well as her teammate from LA. All in all, Wilm earns LA 19 points. DC’s Ali DeLoof posts a 55.89 to go her second best time in as many days. Toronto takes 3rd and 4th giving them a total of 11 points.

Robert Glinta surprises from lane 8 to win the men’s 100 backstroke and earn Iron 9 points. The LA Current did well to place 3rd and 4th earning a total of 11 points. Iron’s total points are buoyed up to 11 as well thanks to a 7th-place finish from Guilherme Basseto. DC earns just 7 points in this race while Toronto takes just 8 points.

Anastasia Gorbenko and Beryl Gastaldello gave the LA Current a 17-point bump with a 1-2 finish in the women’s 100 IM. More than the points, the energy the LA Current gets from the 1-2 finish is vital to the team’s momentum as they continue to whittle down the lead Toronto established on day 1. Toronto didn’t do too bad in this race with 3rd- and 4th-place finishes thanks to Kayla Sanchez and Louise Hansson, earning the Titans 11 points. DC had some trouble, only earning 6 points, though Iron came out worst with only 3 points, their second swimmer having their single point stolen by Gorbenko.

Marco Orsi gave Iron a huge win with 12 points in the men’s 100 IM. Iron teammate Leonardo Santos did well to place 4th, brining Iron’s point total up to 17. Toronto only earns 6 points in this race while DC takes 7 points and LA 6 points.

Tatiana Belonogoff and Maria Temnikova gave DC Trident the points infusion they needed with a 1-2 finish in the 100 breaststroke, good for 16 points. Toronto only earns 5 points while LA only takes 8 points. DC’s victory in the women’s 100 breaststroke is good news for Toronto since it keeps LA at bay somewhat.

Fabian Schwingenchlogl gets a win for Toronto in the men’s 100 breaststroke while DC finishes 2nd and 3rd with Felipe Franca Silva and Cody Miller. Iron picked up 9 points while LA gets only 5 points, half of what Toronto brings in.

Ranomi Kromowidjojo and Emilie Beckman get a huge 19 points for Team Iron in the women’s 50 butterfly. Kromowidjojo jackpots Toronto’s Coleman and DC’s Quah. LA earns 8 points from the race while Toronto gets only 6 points and DC just 4 points.

This race was a little bit of a surprise in that Louise Hansson placed just 3rd–she seemed the favorite to win after her 55.26 100 butterfly on Thursday. Kromowidjojo now represents a serious threat in the skins.

Nicholas Santos managed to hold off a charging Marius Kusch for the win in the 50 butterfly. Santos brings in 12 points for Iron and jackpots his teammate, as well as DC’s second swimmer. Toronto gets 12 points also in the men’s 50 fly while LA gets 9 points. DC, however, only earns 3 points.

Aleksander Shchegolev surprised with a victory in the 200 freestyle, though the LA Current did well getting 2nd and 3rd for a total of 13 points, equaling DC’s haul. Iron had a rough time after being so strong earlier in the session. Toronto’s results are mediocre with just 8 points.

The LA Current got a crucial win in the mixed medley relay, and with a 7th-place finish also the Current nets in 24 points, thanks also to a 2-point jackpot from Iron. Toronto brings in 18 points versus DC’s 22 points, though Iron hurts the most with only 10 points.

The LA Current has narrowed the gap with Toronto, and now only 14.5 points separates the Toronto Titans and the LA Current. The 400 IMs will be crucial to the outcome of the meet. If Summer McIntosh can get it done for Toronto, that might keep them in 1st. If Bailey Andison wins for DC and earns jackpot points, that could hurt Toronto, unless LA has some kind of disaster, though with Anastasia Gorbenko in the pool, that seems unlikely.

Bailey Andison overtook Summer McIntosh on the breaststroke leg of the 400 IM and didn’t look back. Andison’s 9 points for the win are stretched to 16 thanks to a checkpoint bonus as well as a jackpot steal from both of Iron’s swimmers. Toronto’s Tes Cieplucha placed 3rd and netted a total of 9 points.

Alberto Razzetti and Max Litchfield delivered big for the Toronto Titans with 1st- and 3rd-place finishes in the men’s 400 IM.  LA’s Tomoe Hvas got the Current on the board, though Abrahm DeVine was much further back. DC’s Andreas Vazaios and Tommy Cope got DC on the board but it’s probably not enough to catch up to LA and nab 2nd place.

Round 1 of the women’s 50 fly skins results in 2 swimmers from Iron, Ranomi Kromowidjojo and Emilie Beckmann, move onto the semifinal. Louise Hansson wins the first round and gets Toronto 9 points while Helena Gasson earns a berth for the LA Current with a 4th-place finish.

Louise Hansson blasts off the 25-meter turn and takes the lead, overpowering Kromowidjojo for the round 2 win. Iron’s Emilie Beckmann places 3rd and LA’s Helena Gasson 4th, knocking both out.

Louise Hansson double-down on her great underwater skills in the skins final to rocket past Ranomi Kromowidjojo and seal the deal for Toronto in the skins. Hansson has now earned 57.5 points in Match 5 and is leading the MVP standings. If she wins Match MVP she gets an $8,000 bonus.

Marco Orsi blasted ahead to win the first round of the skins. Orsi and teammate Thom de Boer will advance to the semi-final, along with Toronto’s Shane Ryan and Yuri Kisil. No LA or DC Trident swimmers will advance, including yesterday’s 50 freestyle winner Ryan Hoffer of the Trident.

Thom de Boer gets the win, and interestingly, Shane Ryan and Yuri Kisil tied for 2nd, meaning there will be 3 swimmers in the skins final for the first time in ISL history. Only two swimmers in the final will be allowed to earn points for their team.

As 3 swimmers race in the usually 2-person skins final, Shane Ryan has a great start but he is overpowered by Olympic finalist Thom de Boer who wins the men’s skins, making it 2-for-two in the skins in Match 5.

I hope it will be a good race for the 2nd place. And Toronto is not untouchable. It would be great to see this match somewhere. I read subscribe to isl not worth.
Go Iron!

You know what? I think DC has a great chance of finishing second tonight

I can’t see them getting second with Free/Fly skins.

http://tv247.us/watch/cbs-sports-network/ for those of you who are looking for a link!

For once, I actually don’t know who will win an ISL match. Glad to see such an engaging competition!

Madi wilson and Kylie Masse are my type

you’re not my type

screen animations not working for anyone else? I could tell it was Rooney who won the 100 free but I have no idea who swam it

This stream is a fever dream.