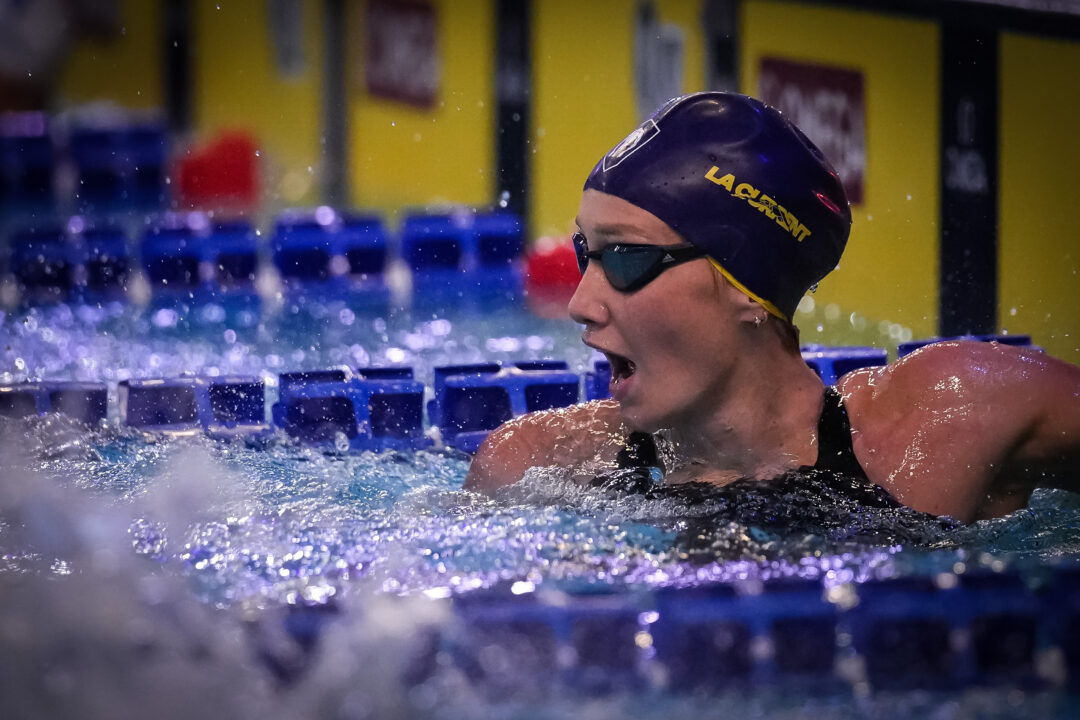 Match 5 of the International Swimming League's third season is upon us and it's going to be an interesting one with 4 team points are up for grabs. Current photo via Mike Lewis/Ola Vista Photography

Match 5 of the International Swimming League’s third season kicks off Thursday, and unlike the first four matches of this regular season, there isn’t a clear favorite to win the team title. With neither the Cali Condors nor Energy Standard competing in this match, 4 team points are up for grabs.

LA swam very well in Match 4, putting the Cali Condors on the defensive and swimming tough, especially in the areas where the Condors were relatively weak. The Toronto Titans, however, are a pretty appropriate stand-in for the Cali Condors since they, like the ‘Dors, boast some of the best backstrokers in the league, as well as a formidable breaststroke crew, representing an area the Current needs to improve.

Tom Shields of the LA Current will likely win both the 100 and 200 butterfly in Match 5 and will be a serious contender for the 50 fly. Tomoe Hvas could provide good support to Shields in both the 100 and the 200 fly, though Maxime Rooney could also be utilized in either of those races. Helena Gasson is fresh off a New Zealand national record in the 100 fly — and also recently broke her own NR in the 50 fly — and is likely to be LA’s best female butterflyer. Anna Ntountounaki will also likely play a role for LA in the butterfly, and perhaps we’ll see more of Beryl Gastaldello, who’s been pretty low-key so far this season.

The Toronto Titans are buoyed by Marius Kusch and Louise Hansson, and will also have Grigori Pekarski and Alberto Razzetti waiting in the wings. Fifteen-year-old Summer McIntosh won the 200 butterfly in Match 1 and could repeat in Match 5 if she can hold off Match 2 victor Alys Thomas of Team Iron. Besides Thomas, Iron brings in 50 fly superstar Nicholas Santos and Luiz Altamir Melo. Though they could very well pick up victories in at least two butterfly events, Iron lacks depth in the butterfly for as long as Kristof Milak is absent.

Zach Harting is the best butterflyer the DC Trident has right now, and he could upset LA’s Shields in the 200 fly. Beyond Harting, DC has Ryan Hoffer, Camden Murphy, Thom de Boer, and Andreas Vazaios on the men’s side, and Szuszanna Jakabos, Madeline Groves, and Klaudia Nazieblo on the women’s.

The Toronto Titans bring in lots of backstroke talent with Kylie Masse, Lisa Bratton, Michelle Coleman, Shane Ryan, and Cole Pratt. While Masse would normally be the favorite in the 100, as well as probably the 200, unless Bratton is on top of her game, Ingrid Wilm of the LA Current broke Masse’s Canadian Record in the 100 backstroke during Match 4. Wilm, however, will likely have to carry the Current in backstroke as Kathleen Baker has not found her groove yet this season. Apostolos Christou, Maxime Rooney, and Javier Acevedo make for a solid support class of backstrokers for the LA Current on the men’s side, though they’re notably weakened here without Ryan Murphy.

Iron brings in a solid crew with Robert Glinta, Lorenzo Mora, Ingeborg Loyning, Silvia Scalia, and Africa Zamorano. Glinta could get his hand on the wall first in either the 100 or 200 backstroke, though Toronto’s Ryan will be tough to beat. Scalia, meanwhile, ought to be competitive in the 50 and 100 on the women’s side.

The DC Trident has sprint backstrokers Ali DeLoof and Linnea Mack, who went 1-2 in the 50 backstroke in Match 4. DeLoof has been strong in both of her matches in the 100 as well and could challenge LA’s Wilm and Toronto’s Masse in that distance. Szuszanna Jakabos could be utilized in the 200 backstroke if necessary, though is possibly more useful in the fly and IM. For DC’s men, Jacob Pebley, Mark Nikolaev, and Andreas Vazaios cover all three races pretty well, with Pebley representing a safe bet for victor in the 200.

LA Current has Anastasia Gorbenko and Imogen Clark, both of whom have been very good so far this season, as well as Will Licon. Though all three have impressive resumes, Licon hasn’t hit his stride yet this season, and the Current lacks depth in breaststroke. After all, it was head coach David Marsh’s first pick to eliminate during the skins selection in Match 4.

Then we’ve got Iron, who brings in Erik Persson, Bernhard Reitshammer, Ida Hulkko, and Jenna Strauch. Persson won the 200 breaststroke in Match 3, though none of his teammates have secured an individual ISL victory yet this season. Similarly, DC Trident’s Tommy Cope won the 200 breaststroke in Match 1. Cope, in fact, should probably be considered the favorite to win the 200 breast in Match 5. Beyond Cope, DC has Tatiana Belonogoff, Maria Temnikova, Tommy Cope, and Felipe Franca Silva, all of whom should be good to score some points — or at least not get jackpotted — but none of whom are likely to win an event.

Women’s freestyle is going to be fun to watch in Match 5. DC Trident brings in a strong middle-distance duo with Leah Neale and Joanna Evans. Summer McIntosh of Toronto and Madison Wilson and Valentine Dumont, both from the LA Current, could tip the scales a bit away from DC in the women’s 200 and 400 freestyles, though.

DC has strong female sprinters in Linnea Mack, Anna Hopkin, Ting Wen Quah, and DeLoof. Despite this, it’s difficult to see them having enough firepower to accrue more points in the women’s 50 free, 100 free, and 4 x 100 freestyle relay than the LA Current, who will have Wilson, Abbey Weitzeil, Beryl Gastaldello, as well as a handful of other women capable of splitting a 53-mid-to-54-low on a 100 freestyle. Iron’s best female freestylers are both sprinters, and while Ranomi Kromowidjojo and Barbora Seemanova could do some damage in the 50 and 100 freestyles, Iron lacks any substantial depth here. The Toronto Titans will make things interesting in the 50 free, 100 free, and the women’s 4 x 100 free relay, thanks to Kayla Sanchez, Kasia Wasik, Michelle Coleman and Louise Hansson.

The LA Current probably has the strongest men’s freestyle team thanks to Fernando Scheffer and Martin Malyutin, who are dominant in the 200 and 400, but can also swim elite 100s. Otherwise, Vladislav Bukhov, Maxime Rooney, and Ryan Held make for a solid sprint crew. LA’s primary freestyle competition is likely to come from Toronto with Blake Pieroni, Yuri Kisil, Brent Hayden, Lorezo Zazzeri, Marius Kusch, and Luc Kroon. Iron has the potential to do well in the 200 and 400 if Matt Richards and Luiz Altamir Melo are on their game. Thom de Boer could bring in some sprint freestyle points, however, Iron is looking a little fragile in men’s freestyle. Finally, the DC Trident boasts Zach Apple, Ryan Hoffer, Aleksandr Shchegolev, Zane Grothe, and Velemir Stjepanovich. Grother and Stjepanovich have been decent so far, but the sprint crew needs to get it together to pose any serious threat in the 50, 100, or the relays.

The Toronto Titans bring a strong IM crew with Summer McIntosh, Kayla Sanchez, Tess Cieplucha, and Louise Hansson on the women’s side, and Alberto Razzetti, Finlay Knox, Luc Kroon, and Max Litchfield on the men’s side. It’s possible that Toronto could sweep the IMs in Match 5, though that is unlikely given that they would need to win six events — but if any team competing this weekend is capable of such a feat, it’s the Titans.

The LA Current is also very formidable in the IMs with Anastasia Gorbenko, Sarah Franceschi, and Beryl Gastaldello on the women’s side, and Tomoe Hvas, Abrahm DeVine, and Javier Acevedo on the men’s. LA is stronger in the IMs on the women’s side than the men’s, thanks especially to Gorbenko, but Hvas has been pretty clutch so far this season and could place top-4 in all three IM distances.

Iron is perhaps the weakest of the four teams competing in Match 5, bringing in a cast that includes Maria Ugolkova, Africa Zamorano, Leonardo Santos, Bernhard Reitshammer, Costanza Cocconcelli, Marco Orsi, and Erik Persson. Even so, Santos or Orsi could upset in the men’s 100 or 200 IMs. DC Trident has Andreas Vazaios and Bailey Andison as its best IM performers so far this season, as well as Jay Litherland, Annika Bruhn, Tommy Cope, and Szuszana Jakabos.

LA, Toronto, and DC will put together strong women’s 4 x 100 freestyle and medley relays, though LA looks like the team to beat. Similarly on the men’s side, LA and Toronto should have a good battle, and if DC’s sprinters step up, it will be a three-team fight. Iron is not looking as good in either the freestyle or medley relays, however, they are strong in the mixed medley relays, and could claim a victory in that race.

LA will be difficult to take down in both the women’s and men’s 4 x 100 medley relays, though Toronto could pull off an upset in either if their breaststrokers are on point.

As for 3rd, DC looked pretty good in Match 4, and only lost the battle for 3rd by 26.5 points to the Aqua Centurions. Iron, on the other hand, has had no serious competition for 3rd this season, having defeated the NY Breakers by a large margin in Match 3. Still, Iron was only 36 points short of London in Match 3, and London is arguably tougher competition than the Aqua Centurions, who have beaten DC twice this season.

LA definitely takes this one. Probably followed by Toronto, DC, then NY in that order.There will be competition for second from all 3 of the other teams though.