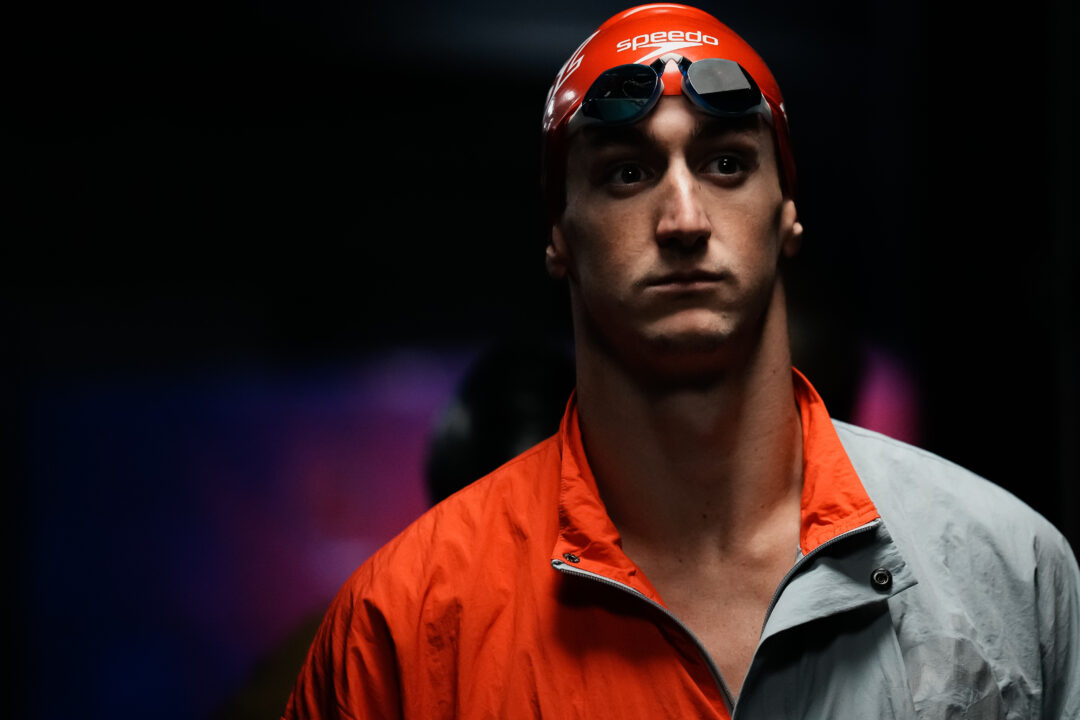 After an inauspicious start to his ISL career, #2 overall draft pick Ryan Hoffer picked up his first individual victory on Thursday in the 50 free. Archive photo via Mike Lewis/Ola Vista Photography

Match 5 of the 2021 International Swimming League season is finally bringing some competitive drama into play, with the DC Trident, who don’t have a post-season match in club history, challenging 2020 finalists LA Current for 2nd place.

We already know that LA will get a big boost from returning swimmers in the post-season including Ryan Murphy, one of the highest-scoring swimmers in the league last season, but from a fan perspective, it almost doesn’t matter – this kind of competitiveness in a meet is what the format has lacked through two-and-a-half seasons.

Individually, the meet is an even more competitive battle. An outsized relay performance by the Titans with 4 wins in 4 events has left them well out in front. Based on seed they would’ve scored 42 relay points, but in actuality, they’ve scored 112.

The difference there further highlights how had it is to create parity with Jackpot swims impacting high-value races like relays and skins. The half-second margin between Toronto and LA resulted in massive differential scoring swings that saw, for example, Toronto picking up 38 points in the first relay.

The Trident’s breakthrough here isn’t really a surprise. We actually wrote earlier this week about how they were better than their back-to-back fourth place finishes looked. In part, matchups matter – this is a favorable matchup for the Trident.

Cody Miller was a late arrival to the ISL this season, but after missing the Olympics he’s shown up ready to race for DC. He finished 2nd in the men’s 200 breaststroke in 2:04.54 (behind Iron’s Erik Persson, who has been a pleasant surprise). Miller’s best time in season 1, his last ISL appearance, was a 2:07.06.

On top of that, Ryan Hoffer, the #2 overall draft pick this season, is finally starting to live up to his short course hype. He won the first ISL race of his career, the 50 free, in 21.25. That’s faster than the 21.64 he swam in Match 1 (he was a relay-only swimmer in Match 2), and ranks him 5th in the league this season.

Besides being a best time, this highlights where matchups can matter. None of the three teams in this meet have great male sprinters (no Caeleb Dressels or Ben Prouds or Florent Manaudous), which left the door open for a Hoffer win.

He still needs to do more if DC were to make noise in the playoffs – he was the slowest split on DC’s men’s “A” 400 free relay at 47.11, which is slower than he was last week – but thanks to the win he’s not a total bust, and he’s got some motivation and some confidence.

And he might have a chance at a big boost of confidence thanks to the outcome of the ‘skins’ selections.

I don’t think we’re going to see the massive skins Jackpot swings that we’ve seen in prior meets here, because it’s a pretty tightly-bunched group. Hoffer, as the winner of the individual race, is obviously the favorite, but without much experience in the format, and much evidence that he can repeat his speed over-and-over again, there’s a few other guys who have a chance (including a sleeper pick in Tom Shields if he can get out of the first round). We also have to remember that Bukhov has been 21.1 this season, so while he was off in the individual 50, he’s still capable of being in the hunt here.

And that’s where the swing will come. If we presume Toronto continues to pick up big relay points, and hold serve individually, they really just need Shane Ryan do advance and not get Jackpotted. But then the battle for 2nd between DC and Toronto becomes really interesting. Zach Apple hasn’t been as good this season as he was last season, but Hoffer will be well-served to go for broke in the first round, try to keep the LA swimmers out of the second round, and hope that’s enough for his team to pick up a victory. At that point, a Shane Ryan or Thom de Boer or Marco Orsi win doesn’t really hurt DC.

This is going to be Louise Hansson’s race to lose. She was dominant in the 100 fly in 55.26, and while I’d say that Linnea Mack of DC probably can keep things closer in a 50, nobody’s going to touch Hansson. The Jackpot margin of 1 second will almost definitely come into play in the first round, and she’ll have the margin to go for those big points, and probably still win the final round.

So, if Toronto doesn’t have the meet sealed by this point, they will.

The only potential spoiler here is Beryl Gastaldello, who has been very good at skins races in her ISL career. While she didn’t swim the 100 fly, she won the 50 fly at 4 ISL meets last season, and won a freestyle skins race to boot.

The battle for 2nd becomes more interesting here, as Mack, Anna Ntountounaki (LAC), Helena Gasson (LAC), and Klaudia Nazieblo (DCT) grabbed the 2-5 spots in the 100 fly. DC again has to feel good about Mack’s upside in the shorter 50 meter race, but it’s again not a slam dunk.

If the race for 2nd place at this meet comes down to the skins races, right now it looks like a slight lean toward DC, but LA has a chance.

Toronto Titan Louise Hansson, who was previously the fastest-ever swimmer in the 100 yard fly, moved up the all time rankings in the 100 short course meter fly on Thursday. Her 55.26 ranks her as the 7th-fastest performer in the history of the event:

Other Day 2 News of Note

Not gonna lie. It’s hard to see Hoffer in red.

i thought in the men’s relay Toronto won….didn’t they get to choose what stroke for the skins?

It’s not based on the winner this season. It’s based on who scored the most points in the event. Toronto won, but LA scored more points.

Day 1 team scores in the article are wrong.