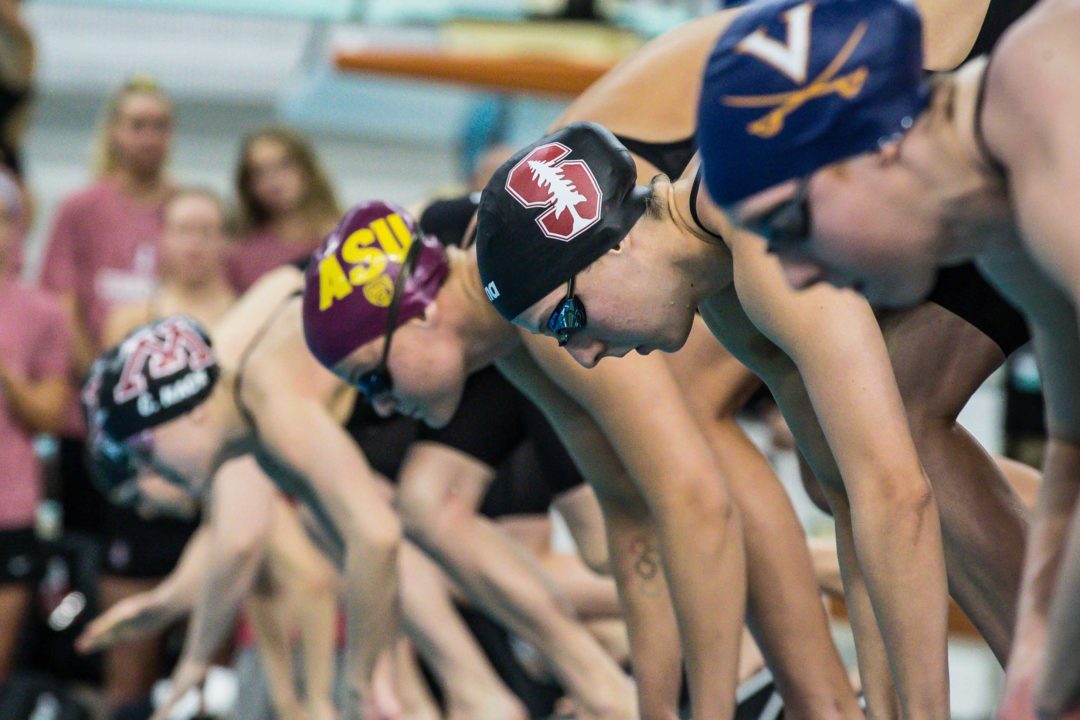 Brooke Forde returns to defend her 2019 crown, holding the best time of anyone in the field by at least a half-second at 4:31.34. Archive photo via Jack Spitser/Spitser Photography

With six of the eight 2019 A-finalists returning from last year, along with defending champion Brooke Forde of Stanford and 2019 runner-up Paige Madden of Virginia, this event will be a battle between many familiar faces.

Forde was 4:31.34 to set the University of Texas pool record in last year’s final, powering home with three 26’s to run away from the rest of the field. Someone who improved her times from mid-season to Pac-12s to NCAAs last year and in 2018, Forde comes in at 4:36.31 from this year’s mid-season meet, the #6 time in the country this year, and we know she saves her best for last (NCAAs). The only time she’s been better than her current season-best was during prelims (4:34.97) and finals (4:31.34) of last year’s NCAAs, and she looks very capable of defending her 2019 title.

In this 500 free final, there is a cluster of schools looking to be well-represented. Arizona State could be the party crashers on the expected Stanford dominance, though. Leading the country this year is not former American record-holder Cierra Runge, but her teammate Emma Nordin. Runge, who was 4:31.90 to win the 2015 Pac-12 when she was at Cal (she’s since swam at Wisconsin and is finishing out her NCAA career with ASU), has been 4:36.06 this season to rank fifth. Nordin, a Carmel Swim Club alum who has made strides in her junior campaign with the Sun Devils, ran away with the 2020 500 free Pac-12 title with a 4:33.74. It was an outstanding swim, and a true break-out performance; she’s never been under 4:37 otherwise.

Runge, on the other hand, has been under 4:37 eleven times in her career, and has been as fast as 4:34.64 since coming to ASU. The Sun Devils could surprise with a third A-finalist here in Erica Laning, a junior like Nordin. Laning is having a break-out third season of her own, going under 4:40 for the first time at mid-season (4:39.96) then dropping down to a 4:37.90 at Pac-12 prelims last month before gaining in finals (4:40.44). Her consistency, like Nordin’s, has yet to be proven, but Nordin’s ability to go a 4:33 gives her much more A-final potential.

There’s also the tough Courtney Harnish of Georgia, who blasted a 4:35.69 at mid-season her freshman year. She went on to tie for 16th in prelims at NCAAs, won the swim-off, then bettered her prelims time with a 4:36.91 to snag tenth in finals. She improved to a 4:35.52 at SECs last year, then snuck into the NCAA A-final with 4:37s in prelims and finals. At 4:36.40 this year from SECs, she’s a great racer who puts up strong swims when it counts, so expect her to be lurking up in the A-final this year. Texas’s Evie Pfeifer returns from making the A-final last year with a 4:36.04 in prelims, and she was an A-finalist in 2018 as a freshman. She hasn’t broken 4:38 this year yet, though, and she’ll definitely need to put in a drop to get into this A-final.

Michigan’s Sierra Schmidt and NC State’s Kate Moore are the other returning B-finalists from 2019. Schmidt’s been 4:37.15 this year to hold at #11, and Moore has been 4:39.34. Meanwhile, the biggest wave by a freshman so far has been Princeton’s Ellie Marquardt. Coming to college with a 4:42.09, she dropped to 4:40.56 at mid-season and exploded for a 4:36.37 to win the Ivy League title last month. It’s her only swim ever under 4:40, but Marquardt could disrupt with an A-final appearance at NCAAs.

Dark horse: Kathrin Demler, OSU. The Buckeye senior rocked three personal bests at the 2020 Big Ten Championships, where Ohio State upset for the team win in a huge performance. Demler clocked a 4:37.04 to improve upon her old best of 4:37.22 from mid-season and win the B1G 500 free crown, though she has only broken 4:40 those two times. OSU has fired a warning shot this season, and another big meet from Demler could see her break into this A-final this year.

How can Runge still have ncaa eligibility? It says in the article that she won the pac 12 500 free in 2015. That’s six college swimming seasons. Doesn’t an ncaa swimmer have five years to compete four seasons?

A student-athlete may be granted a sixth year of eligibility if he/she is unable to participate in his/her sport for more than one season within the five-year period due to circumstances beyond the control of the student-athlete.

I’m not sure that applies here. She was never injured and chose to redshirt and transfer.

I’m not 100% sure, but I think an Olympic red shirt doesn’t count towards the 5 years. I could be wrong though.

she took a a year off in 2016 and then started out her junior year at Wisconsin but never competed for them that year. Transferred to ASU at semester I believe

She competed for Wisconsin in 2016-17. Set a few of their school records.