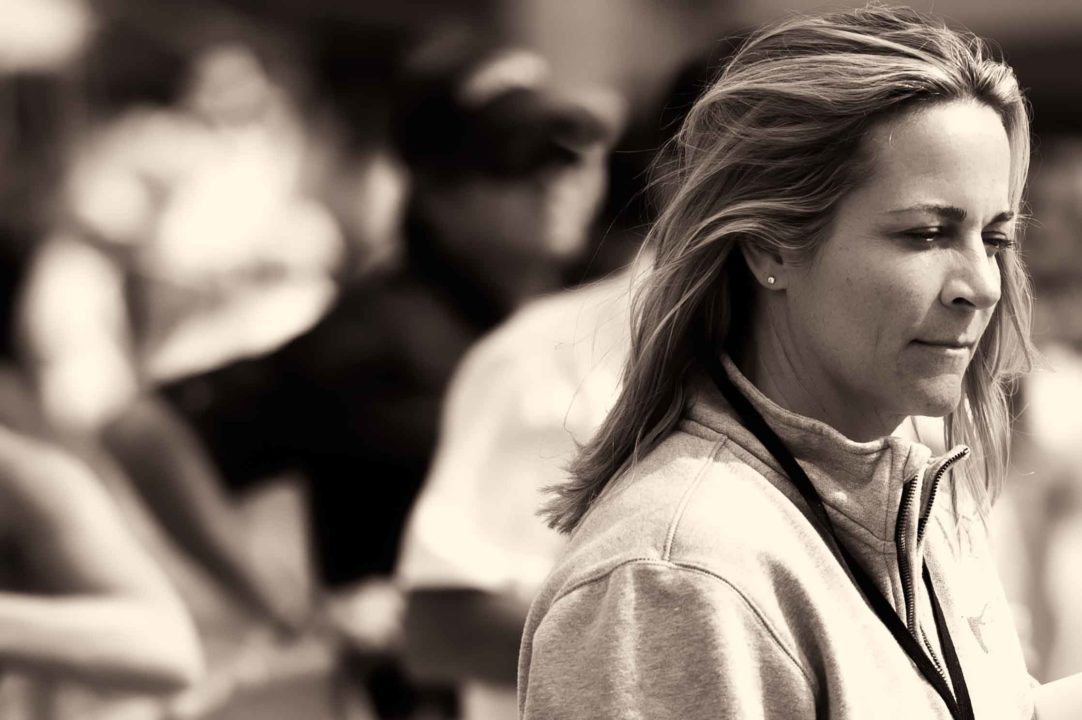 Texas women's head coach Carol Capitani discussed a number of topics at Tuesday's press conference including the challenges of competing in the Big 12. Archive photo via Mike Lewis/Ola Vista Photography

Texas head coach Carol Capitani took to the podium on Tuesday to discuss her team’s outlook at a press conference in Austin just over a week out from the 2020 Women’s NCAA Championships in Athens. Capitani discussed a number of topics, including the difficulties of competing in the Big 12, her relationship with Longhorn men’s coach Eddie Reese, and the impact the freshman have made on her team this season.

Speaking on the Big 12 Championships, Capitani recognizes the lack of competition and how that puts them at a disadvantage compared to the other conferences around the country.

“I did expect to be dominant,” she said on her mindset entering Big 12s. “No disrespect to our conference. I can’t say a word because Eddie only has two teams with which to compete, so I feel like in a lap of luxury when we’re competing against four other teams. But it is daunting sometimes to look around at the rest of the country and the other conferences, because…they’re very, very competitive. And in swimming, our conference isn’t as competitive, so I hope to be very dominant. Not expected, but I would hope to win all the events.

“And it does show we have some weaker spots, we have some holes, but that doesn’t mean we’re not going to be really good. I think it’s a testament to how tough our women are….in some ways we’re competing against ourselves.”

One of the key areas Capitani, who is in her eighth year as Texas’ head coach, sees the lack of competition being a real problem is for the athletes who are still looking to qualify for NCAAs.

“Where I think it sometimes hurts us is because, if you have that middle-layer of kids who are striving to make NCAA Championships, a team race would probably help them more.

“If you look at other teams around the country, and say they’re in a team race at their conference championship, that can raise your middle-level up, because everybody’s fighting for every single point. And when you’re just competing and not worried about times that’s when you really do well.”

The Longhorn women lost a staggering eight swimmers to graduation after last year, but the five first-years have had a positive impact on the group from Capitani’s perspective.

“The five freshman we brought in, they have fantastic dispositions,” she said. “They’ve gotten really close as a group. But I just think the energy and the enthusiasm they brought to the team is palpable, it’s really fun.”

On Eddie, Capitani cherishes that they can have a close relationship and bounce ideas off one another.

“I am grateful, just to stand on deck with Eddie,” she said. “It’s not like we’re a combined program, but I’m grateful. He’ll tell me what he thinks, no matter what, and I appreciate that.

“Eddie takes the blame a lot. Eddie owns his team, he owns behaviour, he owns swims. So there’s just so much to learn just by watching and listening, I’m always humbled, and it’s fun. I’m grateful we have a good relationship.”

Capitani also discussed the standout years of senior Claire Adams and freshman Kelly Pash, the underlying pre-Olympic Trials anxiety her team has, and the measures being taken to allow diving coach Matt Scoggins to travel to Japan and come back in time to attend the Olympic Trials amid the spread of the coronavirus.

You can watch the full press conference below:

Great coach? Sure. Same level coach as the Texas men’s? No.

To be fair, that’s a high bar.

She’s such a class act!

The Big 12 Conference is overall lacking in competition, but I find it peculiar that it was mentioned that the Texas team was swimming against themselves this past year. There were some events where they were clearly dominate, but looking at some of the results, Kansas challenged them in a good amount of events and ISU, WVU, and TCU also put up A Final swimmers that were better than their mid level kids. Just a little confused at the comments. Best of luck to Carol and the Texas WSD at NCAAs!

Kansas put up some great times! Astonishing considering the difference in facilities across the conference.