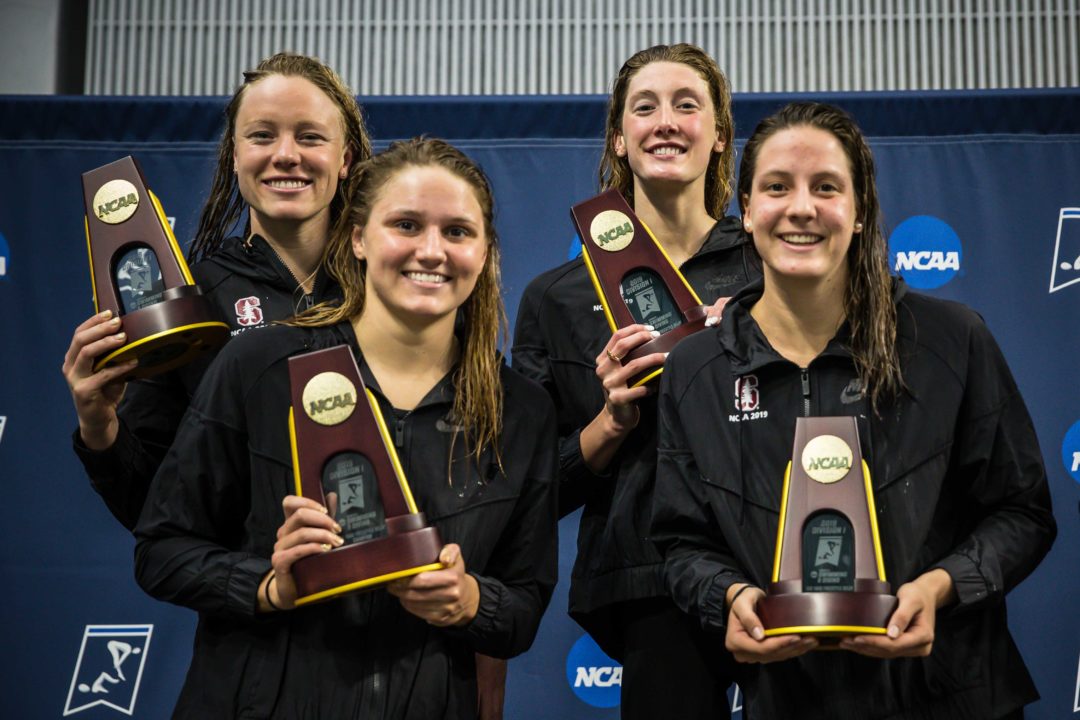 For the 4th year in a row, Standford, Cal and Louisville hit all 5 'A' cuts for the Women's D1 NCAA Swimming & Diving Championships. Current photo via Jack Spitser/Spitser Photography

With 5 titles on the line and major additional points to be scored, team want to to get as many relay invites to NCAAs as possible. Schools can qualify either by having at least one individual qualification (swimmer or diver), along with an ‘A’ relay cut or by having at least 4 individually invited swimmers and having a ‘B’ cut.

The following shows each of the thirty teams who have qualified to swim at least one relay at NCAAs and which relays they have qualified in. The last column indicates how many of these relay qualifications came from swimming the ‘A’ cut.

Only 3 out of 30 teams to qualify relays to swim at NCAAs are not from a ‘Power 5’ conference; the SEC, ACC, Big Ten, Big 12 or Pac-12. The 3 ‘Mid-Major’ schools to secure relay invites are Harvard (Ivy League), San Diego State (Mountain West), and the University of Houston (AAC). All three of these school won their respective conference titles this year.

It takes a solid amount of depth in order for team to qualify 5 relay teams to swim at NCAAs, which is why only a handful achieve the feat every year. This year, there are 13 teams qualified to swim all of the relays. To go even further than that, a real signifier of a top tier program is hitting the ‘A’ cut in all five relays. This year, that was accomplished by 6 schools; NC State, Stanford, Cal, Tennessee, Virginia, and Louisville.

Of the 6 teams who hit the Qualifying Standard in 5 relays this year, only 3 of them have done so every year since 2017; Stanford, Cal, and Louisville.

The 2020 Women’s NCAA Swimming and Diving Championships take place at the University of Georgia in Athens, GA from March 18th to the 21st.

The ACC has really come into its own with 3 of the 6 teams with all 5 A cut relays coming from there.

If UVA and NCState had hit all 5 A relays last year, instead of both only hitting 4, then they would have joined the ranks of Louisville, Stanford and Cal for having all 5 relays hit A standard for the 4th year in a row. Making it 3 of the 5 to hit 5 for 5, 4years in a row; ACC teams. #funfact